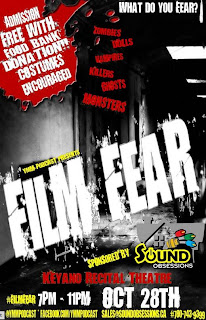 People, I have a confession. Halloween is not my favourite holiday. In fact it ranks pretty low, mainly because I frighten fairly easily. In fact before I had my daughter our Halloween plans usually involved hiding out somewhere and avoiding the world. Once our daughter arrived I embraced Halloween a bit more warmly (kids have that effect on you, I guess). One thing I haven't done since childhood, though, is wear a costume. Well, this was a banner year, people, because not only did I buy a costume, I even wore it - to the YMMPodcast/Sound Obsessions "Film Fear" event at the Keyano Recital Theatre.

Regular readers of this blog know I'm a fan of Toddske and Tito from YMMPodcast. We began our adventures in "new media" (podcasting for them, blogging for me) around the same time. Since then we've become pretty good friends, even if we don't always agree on issues (and some we disagree on quite vehemently). Regardless of whether we agree or not, though, I'm a huge fan of people from Fort Mac telling their own stories, and that's what the podcast guys do. They even invite other local people to appear on the show to tell their stories, too (like me, one of the only times I've ever agreed to have my voice heard as I think I sound like a squirrel on speed). They'd done a terrific job with the interPLAY Film Festival so I was really looking forward to "Film Fear" - and my anticipation was rewarded with a great event.

"Film Fear" was a horror film festival, and the entry fee was a food bank donation. I'm delighted to report that over 300 pounds of food was donated, and over $200. That's pretty darn impressive, I think, and I'm pleased that instead of trying to turn this into a money-maker it was yet another chance to exercise some charity.

When my friends and I arrived at Film Fear we were slightly late. It's tough to organize Indiana Jones, the Cheshire Cat, Captain Morgan, and a witch, though. We were all frantically adjusting costumes, pinning a tail onto the cat and trying to recover from the fumes from glitter hair spray (if I seemed slightly dazed I suspect I was mildly intoxicated by said fumes, and I suspect I increased my carcinogen intake significantly that night). We arrived to find the theatre reasonably full (for a first-time event), and Toddske and Tito on stage announcing the line-up.

First up were several movie trailers for old, very bad, very cheesy, horror movies. The one that has stuck with me the longest is the trailer for "Scream Blackula Scream", which must have been just as cheesy and mildly offensive when it was first released as it is today. After the trailers it was on to the horror shorts, including "Box", from our very own Hyperphotonic Media (Tito). The shorts were great - I love independent short films as they are all so different in vision and execution - but then it was time for the first feature, the classic "Creepshow".

Now, I've seen "Creepshow" many times, but it's been years since the last viewing. It's fun, not terribly gory, and still scary enough to make me jump (especially when my friend Indiana Jones jumped in his seat at one point, causing me to jump too and then smack him for scaring me).

When intermission arrived it was time to head for the lobby and drinks from the bar. After all, what's a Halloween party without some alcohol? I also had a chance to visit with some of the other folks attending Film Fear and check out the costumes, many of which were quite amusing. There was also a costume contest, which, to my utter shock, my other half,  aka Captain Morgan, entered. Considering he hasn't worn a costume since he was probably about 6 (and then because his mother forced him) I was stunned when he jumped up to go on stage. Our friends were so shocked they immediately pulled out cell phones to take photos to immortalize the moment (and use for future blackmail, I suspect).

After the contest, which provoked many laughs, it was back to the films. My favourite short of the night was a Spanish film called "Zombies and Cigarettes", with lovely cinematography and some of the best lines of the night (like "Zombies? In Spain?"). And then, the moment arrived for the film I really wanted to see - the Fort Mac debut of "Red State", by Kevin Smith.


Toddske and Tito had arranged to show a short clip of Kevin himself introducing the film, and the introduction set it up very well. I expected to be impressed with it. I didn't expect to find it as troubling, disturbing, and thought-provoking as it was. It might not be a classic horror movie - it's more of a thriller - but the horror it contains is the very sort of real horror that exists in our world. True horror in our world isn't some guy with a chainsaw and a hockey mask - it's some charismatic person who somehow convinces other people to do and think the unbelievable. True horror is a person who convinces others to set aside fundamental morality in the belief that they are working for the "greater good" by cleansing the world. True horror is what people will do "when they just plain believe". I was stunned by "Red State", people, and it opened some doors in my mind that now seem to refuse to close. It made me think, and in this way was a far better and wiser choice than any typical horror movie the podcast boys could have shown. The horrors of those movies fade as soon as the lights go up - but the horror of "Red State" stays with you for days.


In the final analysis I think Film Fear was a tremendous success. I, and several others, got to see some great films. I wore a costume for the first time in years (although Indiana Jones said I didn't look any different from normal aside from my witch hat, so I'll have to try harder next time). My husband not only wore a costume, he participated in a costume contest. I got to spend another evening in this great community, surrounded by friends and enjoying every moment. I'm kind of hoping this becomes an annual event, people - because it just might change how I feel about Halloween - and costumes. Hope to see ya there next year, Fort Mac!
at November 02, 2011