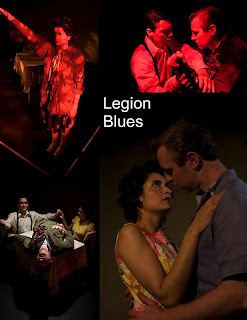 There are experiences, people, that you are uncertain about. You don't know how they will go, and you may even find yourself a bit apprehensive about them. This was how I felt when I reserved seats at the drama production "Legion Blues" by Eye Flower Productions. You see, the apprehension came because "Legion Blues" is rather unique in the Fort McMurray theatrical scene. We have theatre companies, and we have been treated to many wonderful performances - but "Legion Blues" is a play that is performed in a house, not a theatre.

Yes, people, a house, director and playwriter Michael Beamish's house, in fact. I found the idea intriguing but also a bit unusual. I'd been told you watch the play while sitting in the living room, and the action occurs in the kitchen, right in front of you. No big stage, no huge sets, no lighting crews and all the rest. You, a few other guests, and the actors. This seemed an idea that could go very, very right - or very, very wrong. I cannot tell you how delighted I am that this concept not only went very, very right but that it may well be one of the most amazing evenings I've ever had in my decade in this community.

"Legion Blues" is stunningly well written. It is the story of three people - Paul, Ray, and Helen. Paul is a man haunted by the experiences of war. He clearly suffers from severe post-traumatic stress disorder, but in that era, after World War II, such things went unrecognized and untreated. Veterans were supposed to just go home and get back to the real world, putting behind them the traumatizing, soul-searing things they had seen and done in war. But Paul cannot. Paul is a man disintegrating, a man who is a shell of what he was prior to the war. Paul cannot forget, he cannot move ahead, and in many ways he never really came home after the war ended. His body is home - but his mind is still on a battlefield surrounded by corpses. Ray is Paul's best friend, a man who has come home, but who carries his own pain. He sees the war as the catalyst to live, to enjoy, to make the most of every moment - and yet he too remains in the grip of war, unable to truly move ahead as he too is still caught up in it's legacy. Helen is Paul's wife. She is the one who watches Paul disintegrate, watches him descend into a personal hell that she cannot see. She too feels the effects of war, but it is in the disintegration of her marriage, her family, and her life. You watch as the threads of her world unravel. You watch as she tries to snatch some happiness in the midst of such pain.

The characters are amazingly well written, and I found moments when I empathized with every single one. Francis Mennigke as Paul is incredible - his portrayal of a haunted, troubled man actually astonished me. For many years of my life I worked with domestic animals, cats and dogs, and on occasion I worked with animals that had been severely abused. They would always have this look in their eyes when you approached - abject terror, a tinge of wild aggression, and a sort of "deadness" that signified the depth of their trauma. I saw that look in Francis' eyes as he portrayed Paul, and it stunned me. It was a look you hope to never see on the face of another person, and yet there it was. Murray Cullen as Ray is the essential "good guy", the one who seems so untroubled on the surface and yet who is anything but care free. He carries his own wounds, just better hidden and better managed than his friend Paul. Murray plays this role wonderfully well, managing to seem both happy and yet still troubled, too. And Helen? Well, Helen is a woman who finds herself with a husband she doesn't know anymore, and a life that is falling apart at the seams. Actress Rebecca John makes Helen not only believable, but authentic - and I felt her pain. I understood her actions.

Michael Beamish is clearly a gifted writer and director, and the play is a stunning, heart-thumping, provocative ride. What makes it all the more special is the atmosphere and the staging, people. To sit in someone's living room and be able to suspend disbelief is a testament to the writer, director, and actors. To sit in that living room and feel like a voyeur is not awkward (which I feared) but incredible. To watch as a man crumbles into mere fragments of a person, to watch as others try to salvage their own lives - astonishing. When we arrived last night my husband hung my coat on a coat rack, and Michael removed it, explaining that it was actually part of the set - and at that point I knew this was going to be a theatre experience of a unique sort. The audience wasn't separate from the play - we were part of it. At various points different audience members were spoken to as if they were there in the role of Paul and Helen's son, a character who is not there in flesh but who adds another dimension to the tragedy, a child who is witnessing his family implode. When Helen says to the audience "we hide the bad things" (in order to preserve their family image) I felt the hairs on my arms rise as I recognized the veracity of those simple words.

Look, people, I cannot say enough good things about this play. The performers are gifted, with talent that shines even in a kitchen (and this is not an easy environment in which to create such a drama, so their talent surpasses that of the average actor, in my opinion). Michael Beamish has written a play that is so overwhelming that on occasion I was left a bit breathless, and has directed it in a way that allows you to completely forget that you are sitting in his living room. You see, very quickly you are sitting in Paul and Helen's living room instead, and you feel like you are on their sofa watching as they, and their friend Ray, deal with the aftermath of a war that scarred every person it touched. For myself, on the night before Remembrance Day, it became a way to commemorate those who lost their lives in war - but also those who came home forever changed by the experience, and those who loved them. It became my own personal Remembrance Day moment, and I think I too was changed by the experience.

I am looking forward with great excitement to further productions from Eye Flower, because if this performance is any indication I think we have encountered a formidable new theatrical group in Fort McMurray - and I plan to be there, front and centre, for anything they do. Quite frankly, people, they are just that good.

My sincere thanks and congratulations to
Michael Beamish, director and playwriter,
Francis Mennigke as Paul,
Murray Cullen as Ray,
Rebecca John as Helen,
and Nathan Loitz, fight choreographer. 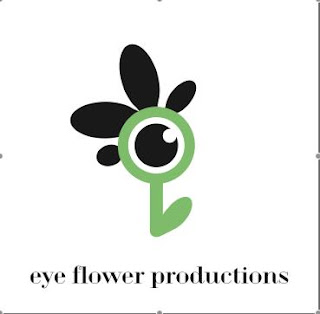