Getting On The Bus With Don Scott 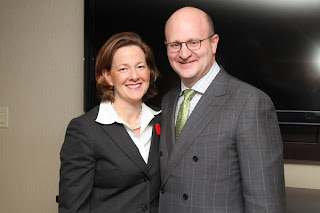 Photo credit to Don Scott
One of the best things about writing this blog has been the opportunity to meet new people. I've met a lot of new people, and they have become friends, and mentors, and allies. They have become people I respect, admire, and value as members of our community. One of those people has been RMWB councillor and lawyer Don Scott.

I met Don when he offered me an extra ticket he had for a local concert. That might not sound like much or a big deal, but it was such a sincere and generous act. I declined the offer since I was actually working backstage at the concert in question - but that initial conversation led to a friendship.

I'm a writer, people, but mostly I'm an observer. I might seem like I talk a lot (and okay, I do) but I'm also the person who is quietly observing everything and forming opinions and thoughts. I file them away for the future and call on them when they are needed. I've been observing Don Scott (although he has no idea) and I've come to some conclusions. Don is a man of integrity, commitment, and vision. I've seen him in action at city council chambers, and speaking to Grade Nine students about legal and political life. I've seen him discuss matters large and small. And I've noticed a few other things, too.

When Don and I talk about an issue he almost never tells me what he thinks first. He asks what I think about it. He asks for my perspective, and my opinion. And then he shares his, quietly but firmly. I remember once when he asked about an upcoming project, and I told him I thought it was great. He agreed - and then said that sometimes he wished that people were just a bit bolder, just a bit more visionary. And that's when I saw the tiger within.

You see, yesterday Don Scott announced his intention to seek the PC Party nomination for the expected provincial election in 2012. He was introduced by former councillor (and Fort McMurray powerhouse) Sharon Clarkson. She commented that under Don's humble and quiet exterior lurks a tiger - and she's right. That quiet demeanour hides a man of vision, determination, and belief. Behind that humble exterior is a man who is a strong voice for our region - just as his campaign motto states.

I happen to support Don for a number of reasons. I think he's intelligent, I think he has vision, I think he's passionate about his riding of Fort McMurray-Conklin, and I think he is a strong leader. I also happen to think that we need a seat at the government table, not in opposition, but we need the right person in that seat. I happen to believe the right person is Don Scott. I believe that he will fight for this area, that he will represent us well, and I have never for a second doubted his commitment to this community. I've seen it first-hand, and frankly it's inspired me to follow his lead and invest more of my time and effort in it, too.

I've also had the opportunity to speak to a lot of other people about Don (ssh, don't tell him I said that, okay?). What I keep hearing is how they respect him, how they see his genuine and sincere commitment to everything he does, and how he cares about this community. So, I don't seem to be alone in my assessment of who Don is as a person. And as I've said before I base a lot of my political decisions on character, not just policy. And in my opinion Don's character is stellar.

I won't deny that I am Don's friend, and that I intend to work on his campaign. I am very open and honest about everything I do here in this community, and when I began this blog I committed to being open and honest with all of you. Maybe you won't agree with my decision to support Don, and maybe you'll find your answers elsewhere on the political spectrum in Fort Mac. But me? I'm claiming my seat on the Don Scott bus early, before everyone else hops on it - mainly because I hate having to stand on a crowded bus in my high heels. So, people, I hope to see you on the bus - because I think it's going to be a helluva ride, all the way to the Legislative Building.