I'll be the first to admit it, people. Writing this blog has given me some pretty great opportunities, from being backstage at SummersEnd (and driving George Canyon and his band around), to attending press conferences, galas, and events. I've been honoured to write about some of our local non-profit groups, and I've met some pretty amazing people. Next weekend, though, I'm doing something that I think just might be the most exciting thing I've ever done in Fort McMurray, and something that has tremendous personal meaning for me. What is it, you ask? People, I've been asked to be a judge at the annual Santa Claus Parade.

Now, you might be thinking "big deal". Well, that's because you don't know me. I'm a total Christmas junkie, always have been. The youngest Intrepid Junior Blogger will tell you "it's always Christmas inside mommy's head". Christmas to me has always truly been "the most wonderful time of the year", and not because of gifts, either. It's always had a special feeling to it, and every year that feeling has simply grown. Christmas in my family has always been about spending time with each other, about honouring old traditions and making new ones, about being in the moment. And in my years in Fort McMurray the Santa Claus Parade has been a big part of that.

I believe I've attended every parade in the decade we have lived here. The youngest Intrepid Junior Blogger has been on a parade float three times, and one year I was even the organizer of a float for a local sports group (and in case you've ever wondered, floats are a helluva lot of work, pain, and occasional tears, at least in my case). I've stood out there, hot chocolate in hand, and shivered through every single parade. I've wrapped up in blankets until all you could see was my eyes. I've seen the parade go from a day time one to a night time lights-and-music spectacular (the change to the evening was brilliant in my opinion, too). I've witnessed little children, and not just my own, search anxiously for that final float, and the arrival of Santa Claus.

To me the Santa Claus parade has become synonymous with the Christmas season. Yes, every year I've returned to my car with frozen feet, a drippy nose, and in desperate need of getting home to a Bailey's spiked hot coffee. Yes, some years I've even gone without the Intrepid Junior Blogger, who, as she has grown older, has on occasion decided the parade wasn't for her. And yes, every single year I've been excited.

This year, though, I'm excited beyond words. You see, I had stopped in at the Events Wood Buffalo office to chat with Jenn, then lead event coordinator for the organization. I mentioned that I had gotten an email regarding volunteering for the parade, and that I would reply as this year I wanted to be part of it, not just watching from the sidewalk. Jenn looked at me and said "Oh, you're going to be getting a special email, actually. We'd like you to be a judge this year." Now, I think I managed to contain my excitement and not actually jump five feet in the air and scream "woohoo", but I did say yes - immediately. Because to me, people, this is big. This is like the culmination of all those years I spent standing out in the cold watching the parade. This is like winning the lottery, because not only am I to be a part of it, I'll be right in the thick of it. It's not even about wanting to "judge", but more about being able to take a closer look at the floats, to maybe speak to those people who have put in such hard work (a job I know all too well), and to thank them for participating in an event that children in this city wait for every single year. Like I said, this is big, people. Santa Claus big.

So, I'll include the details on the parade below, and I sincerely hope you will make plans to attend. Come with your kids if you have them, and without them if you don't. Grab a coffee or a hot chocolate, some blankets, and head downtown to celebrate Christmas with the rest of this community. I've written before about how I tend to cry when I get over-emotional, and I am really, really going to try not to cry at the parade - but if you see someone dressed like they are headed to the North Pole, red-cheeked, drippy-nosed, an enormous smile, and happy tears frozen to their face - yeah, you guessed it, that's probably me! Fort Mac - see you there! 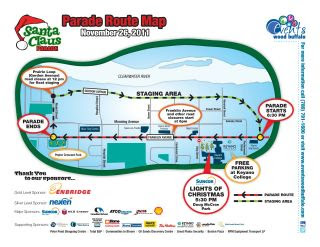 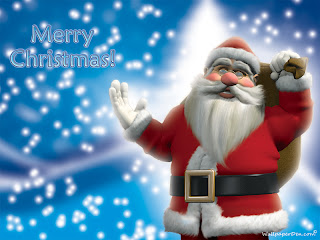