My Life As A Santa Claus Parade Judge

Santa Claus arrived early in Fort McMurray this weekend, people, and he did it in style at the Lights of Christmas and Santa Claus parade, both events organized by our stellar events team at Events Wood Buffalo. If you've been reading this blog you know I was pleased (okay, downright thrilled) to be asked to serve as a parade judge this year. It was an experience I will never forget, people.

I've attended every Santa Claus parade in the decade we have lived here. I remember when it was in the day time, and I remember years when it was -25 and we huddled in our car until the last moment, leaping out only when the first float arrived, and then diving back in as soon as we spotted Santa. I remember the years my daughter rode on a float, and the year I organized and decorated one (that year I'd rather forget as the memory of the amount of blood, sweat, and tears that went into that float tends to diminish my holiday spirit). In one way or another I've been involved in the parade every year, as a spectator, proud parent, or contributor. So, this year, to serve as a judge? It was huge. It was amazing. It was pretty much the Christmas tree topper in a year that has seen a lot of special moments for me. 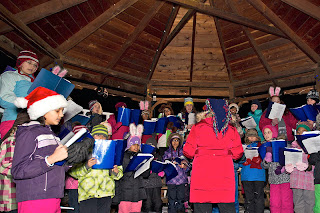 Photo credit to Dan Lines/Events Wood Buffalo
I arrived early at Doug MacRae park to catch the Lights of Christmas event. I was entertained by the carollers, and I managed to snag a hot chocolate. I watched as kids young and old snatched up lighted wands and flashed them around in the dark air. What was so incredibly lovely was the beautiful temperature, quite likely the best night I've ever seen for this parade. When the switch was finally flipped the park came to life with lights and music, the trees seeming to dance as the lights shimmered. I enjoyed the show, and then it was time to head over with my fellow judges to check out the parade.

I was delighted to see my fellow judges were some other local women, Amanda Purcell of Mix 103.7 and Kyla Getty of McMurray Girl. I happen to think I was in pretty amazing company as I respect both of these individuals immensely for what they have given to our community - and they have pretty darn good senses of humour, too, so I knew we were in for a fun time.

The parade started as it usually does, with fire trucks and police cars. I think my fellow judges can agree that we enjoyed those initial entries, not so much for the decor as for the uniformed men inside the vehicles (like I've said before 90% of women have a weakness for men in uniform, and the 10% who claim they don't are probably lying). Soon enough though it was time for the "real" floats, filled with decorations, inflatables of every sort, lights, music - and children. 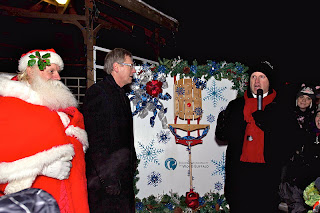 Photo credit to Dan Lines/Events Wood Buffalo
The Santa Claus parade is really about children, of course. I recall when my Intrepid Junior Blogger was very little and her eyes would grow big as each float went by, each float one closer to the arrival of Santa. I remember the years when she was thrilled to be asked to ride on a float, to be one of those kids waving and yelling "Merry Christmas". I remember her riding on them, huddled up in blankets, cheeks red and rosy, and an excited smile on her face. I saw all that again on Saturday night, and it warmed my heart to be reminded of years not so long ago when it was my little girl.

It was tough to judge the floats, people. I know the kind of work that goes into them, but there were certain ones that simply stood out. I loved the "walking" floats, ones that instead of a flatbed were nothing but people in costume and walking the parade route. I loved the SPCA animals, as they always make you want to just reach out and cuddle one to you (and as they are up for adoption you can if one in particular catches your eye). I love the floats with myriads of lights, lights heaped upon lights heaped upon lights, probably visible from space (or at least from a sleigh with eight tiny reindeer). I love the floats with music, the floats where every person on it is singing and cheering. I love them all, people, and it really isn't until this parade that I feel like the season has truly begun. 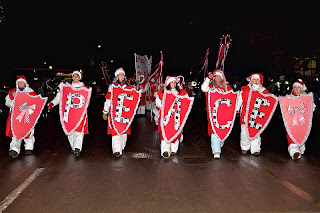 Photo credit to Dan Lines/Events Wood Buffalo
While it was tough to judge my fellow panelists and I finally managed to come to our decisions, and they are as follows:

I'm pleased that the youth and social/service groups also happen to each receive $1000 for their entries, and it is richly deserved. Ecole Boreal won my heart with the French Christmas carols, wonderful decor, and happy children. The Community of Anzac impressed me with their community represented on a float, little buildings and stores all laid out for everyone to see. Inland Concrete fit more lights, blow up decorations, and general holiday "stuff" on a cement truck than I ever thought possible. It pretty much screamed "Christmas" and was impossible not to love. And Mammoet? The mammoth re-envisioned as Santa's reindeer caught both my heart and my imagination. I know how hard every one of these groups must have worked, and it showed. It was a pleasure to recognize them for that work.

I wish we could have given every participant an award, including the guys who tried to bribe the judges with a bag of lollipops (here's a hint, guys, next year try discreet, tiny bottles of Bailey's to add to our hot chocolate instead!). I wish I could have given every single walker, float, and driver an award for coming out on a Saturday night to bring joy to the hearts of hundreds of children - and, well, maybe the heart of a certain blogger, too.

The tree lighting was magical, and the parade, which ended as it does every year with the arrival of Santa Claus, was heart-warming. To see so many residents lining the streets, small children riding on shoulders, older children waving and hugging mascots, parents smiling and shouting "Merry Christmas" - well, it was about all that makes Fort Mac such a special place. It was all about the people who live here, the people who come together for tree lightings and parades and festivals and concerts and sporting events. It was all about everything good in Fort Mac - good will, good humour, good deeds (like the Food Bank's "Stuff the Bus"), and good people. It was, on an unusually warm late November evening, a reminder of why I love this community. It's because of all of you - and, well, Santa, too, of course. 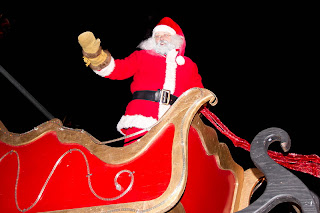 Photo credit to Dan Lines/Events Wood Buffalo
My sincere and heartfelt thanks to Events Wood Buffalo
for the very kind invitation to serve as a judge, and to
my fellow judges Amanda Purcell and Kyla Getty. If we
really are the "Charlie's Angels" of the Fort McMurray
Santa Claus Parade I swear I will fight you both to be
Kate Jackson - although of course I suspect you are
both far too young to even remember her! In any case
you ladies rock, and I was honoured to serve as a judge
with wonderful Fort Mac ladies like you. And to the city
of Fort McMurray - thanks for coming out to kick off
the holiday season with lights, a parade - and Santa!
at November 29, 2011