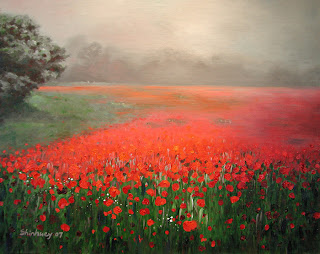 In years past I often attended the Remembrance Day ceremonies at the school attended by my youngest Intrepid Junior Blogger. I enjoyed the ceremony, especially seeing the students participate in it. I always felt that the only way to prevent another world war was to make sure it was never forgotten, but as generations pass on it becomes all too easy for the new generations to forget.

This year, though, I missed the ceremony at my Junior Blogger's new school. I guess I'd become so busy that I had forgotten a bit, too, and had simply been too pre-occupied with my own tasks this week. When I realized I'd missed it I decided instead to attend the city-wide Remembrance Day ceremony held yesterday morning at MacDonald Island. I arrived fairly early, and noted the parking lot was already quite busy - far more busy than I'd anticipated, too.

I walked in the door, and accepted a program from one of the cadets lining the entrance of the Nexen Field House. I sat down, opened the program, and stopped a bit short. The ceremony consisted of three phases - starting at 9:30 AM, and not ending until 11:45. Two hours, I thought? I had other plans - a phone call to return, a meeting to organize, the Intrepid Junior Bloggers still at home in bed, and who would soon be up and looking for food, attention, and their promised (but undone) clean laundry. Two hours. And almost as soon as that ungrateful thought hit me I felt shame. Shame, because I was sitting there feeling a little resentful about giving up two hours of my life when others had given up the entire length of their life so that I could be there at all. I stopped those selfish thoughts, grabbed a new perspective, and settled in. The field house was virtually entirely full by the time the ceremony began, and even up in the atrium above it was standing room only. I was delighted to see several on-duty RCMP and fire department officers in the atrium, radios at the ready to receive calls, but there to witness as much of the ceremony as possible.

The ceremony began, as it usually does, with bagpipes, those instruments seemingly designed to raise goosebumps on your arms. As they piped, in marched the local RCMP, all in red serge (an impressive sight at any time, people), the Fire Department, the Peace Officers, and all the rest of those who serve our community. It was a solemn moment and yet one of distinct pride, too, as these are all people in our community who have committed their lives to us, just as our soldiers have done over the decades.

The first phase of the ceremony was lovely, of course, with messages from our MP, MLA, and mayor. There were hymns and more bag-pipes and drums. There was the singing of "O Canada", and "God Save the Queen", a song that always makes me a bit melancholy as some day, probably not far off, it will end and instead we will sing "God Save the King", signifying the end of another era.

I must admit, though, that it was during phase two that I could feel tears well up. The sound of the trumpet on Last Post and Reveille always does this to me - that solemn moment, that solitary sound, just makes me feel so close to those who never came home from the war. Those forlorn trumpet notes, all alone, make me think of all the soldiers who died all alone, and never came back to those they loved, and who loved them in return. Then there is the laying of the wreaths, again a solemn moment of remembering.

I don't have a lot of family members who fought in the war, people. My father had tried to volunteer for the Canadian Army during WWII, but was turned down due to health issues. The funny thing is that I never even knew this about him since he never spoke of it, and I only found out when my eldest sister delivered the eulogy at his funeral. It was the first I'd heard of his attempt to enlist, and I was a bit stunned. I was stunned because, of course, had he been successful at enlisting I may not exist. He could well have been one of the young men who ended up buried in a graveyard in France. And too it was so bold of him to enlist - he was a young man of German descent, one who had only learned English when he went to school, and enlisting in the Canadian Army to fight the Germans (and, to be honest, knowing there was family still in Germany fighting on the other side) must have been a difficult thing to do. But he was Canadian first, German second, and he also knew right from wrong - and he knew that in this case what Germany was doing could not be allowed to continue.

So, my personal experience of war is very slender. However, I have thought long and hard about what war means, and what it has done. When I was in London recently I saw buildings pockmarked from bomb shrapnel. I saw places where a centuries-old building stood beside one erected in the early 1950's, and knew this was because the original building had been destroyed by bombs. And just as war destroyed cities it destroyed lives, and families. It scarred generations of people, and it damaged the fabric of our world.

After the second phase ended we moved into the hall at MacDonald Island in order to view the "March Past". I was astonished at all the people attending - more than 1000, the official count says - from infants to the elderly. I saw friends, we exchanged hugs and quiet hellos, and we watched the March Past together. During the March Past of flags, red serge, fire department uniforms, cadets, and the rest, I reflected on those two hours I had just spent. I reflected on a father who, had things been different, might not have been my father at all. I reflected on world wars where thousands died - and on those who continue even today to give their lives for freedom. I reflected on the story told by the pastor during the ceremony, a story about two WWII veterans in the same senior citizen's home - but veterans who fought on the opposite side, one Canadian, and one German. I thought about how these two elderly men had become friends who ate meals together, and shared war stories. I thought about how they could have instead met on a battlefield, and how they could have both died there and never found the friendship they discovered in their final years on this earth. I reflected most, though, on how those two hours spent remembering were not enough. I had thought, initially, that two hours seemed an unreasonable amount of my life to spend in remembrance, but I was reminded instead that I should be devoting time every day to gratitude, remembrance, and thought. I was reminded that I was given those two hours - and every other hour of my life - by those who had given their entire lives so I could have them. I was, people, completely humbled. I will remember them, people, not for two hours, but for my entire life, because they deserve so much more than just two hours, and just one day every year.