Challenging Perceptions, Telling Our Stories - and Ending the Trash Talk

Well, people, I think most readers of this blog know I have a pretty low tolerance for Fort McMurray bashing. I acknowledge and recognize the issues in this city, and I know we have things we need to deal with. What I don't accept, though, is the depiction and perception of our city that seems to persist in some parts of this world - and even in our own country. Yesterday I was hanging out on Twitter, and saw a photo that had been posted by another Twitter user. The photo was of the kind of thing that makes me see red, and go off on a bit of rant. The photo? This: 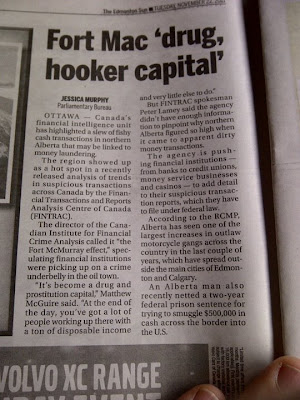 Yes, it's an article from the Edmonton Sun, and yes, it's about Fort Mac. Now, it does point to some issues we have experienced in this community - organized crime, drugs, and prostitution. But there are a couple of things wrong with it, and a couple of things that angered me enough to start sending emails and tweets.

First up is the headline. Clearly the headline is simply sensationalist. It's an irresponsible way of grabbing attention, and it's really not the focus of the article - and yet it becomes the headline. Why? Because Fort Mac has a giant bulls-eye painted on it's back as far as the national media is concerned. Why write a title about there being an increase of financial crime in northern AB when you can instead spin it into an indictment of the evils of our community? Why go for responsible journalism when you can instead go for the sensational, seedy stuff? And we all know how well that sort of journalism has been working out in places like Great Britain recently (and in case you don't know it's not going so well for tabloids across the pond).

The second issue I have is the comments attributed to Matthew McGuire, director of the Canadian Institute of Financial Crime Analysis and director of Risk and Financial Intelligence with Williams McGuire - AML Compliance. I have no doubt Mr. McGuire knows his financial stuff, and that he has experience in investigating money laundering and other forms of financial fraud. What I think he doesn't know, however, is Fort McMurray.

To assess our community as a "capital of drugs and prostitution" is one thing, and we can argue about the statistics and whether or not they constitute making us a "capital" of such activities. My real problem, though, is the quote that "at the end of the day you've got a lot of people working up there with a ton of disposable income and very little else to do". That's not an objective statement by any measure, and not one you can back up with any sort of statistics, either. That's purely a subjective value judgement - it's an opinion, not a fact, and I find that tremendously disappointing.

You see, painting us as a community of people with a "ton of disposable income" and "little else to do" simply perpetuates a stereotype that anyone who has lived in this community or even visited it knows isn't true. Yes, many people here make an astonishingly good living - and they subsequently spend it on housing, food, their families, local sports activities, hobbies, and charities (we are, incidentally, the most philanthropic community in the country). The majority of citizens aren't spending their hard-earned dollars on "hookers and blow".  A segment of our population does, but doesn't that occur in any city? Especially in any city where a significant boom in size and economy is occurring? And that "little else to do" comment is like taking a sharp stick and poking it in my eye. Little else to do? Only someone who has never spent time in Fort Mac can think this. People, I can't even keep up with all there is to do in this place, and I defy any other person to, either. Those who think there is little to do aren't looking very hard - and those who think that about us have never spent a weekend in my house as we rush off frantically from event to event. It's just an old, jaded misconception of what this city is. We aren't a community of high-earning drug users. We aren't all taking our paycheques and visiting prostitutes. In fact I'd say that it's a definite minority involved in those activities, not "a lot" as is postulated in the article. The rest of us? Well, we are having kids (as evidenced by our astronomical birth rate), raising those kids (as evidenced by our filled-to-capacity schools and kid's sports activities), and leading normal family lives - much like everyone does everywhere else in Canada.

I was advised today that by the time this piece made it into the Sun archives the headline had been changed to something far less inflammatory. The problem remains, though. The inflammatory headline was read by hundreds, if not thousands, of people. The comments in the article remain the same, and I do not believe we can allow such comments to go unchallenged. To that end I have contacted Mr. McGuire and am in private communication with him regarding this matter. I have also contacted Jessica Murphy, the journalist who wrote the article, to issue my standard invitation to journalists who write such pieces about my community. What is that invitation? Come to Fort McMurray, and let me be your tour guide. Let me show you the Fort Mac I've grown to know and love over my decade here. Come and see our recreational facilities, our schools, our college, our businesses, and meet our citizens. I will also extend that same invitation to Mr. McGuire. You see, I think it's very easy to make such comments when you have never really spent time in a community or gotten to know the people in it. The only way to deal with this kind of media coverage is to confront is, challenge it - and then invite those involved to see the real Fort Mac. If we want to change the way our community is viewed then we need to show the world who we really are. This blog is my humble attempt to do so, and I hope every single one of you use every opportunity to act as ambassadors for this city. So, I'm not angry today, just a little disappointed - and, too, maybe just a little bit hopeful. Just maybe this is another opportunity to educate people about Fort McMurray, our community - and who we are. Just maybe this is a chance to tell our story yet again, to change perceptions and to show that there are people in this community who care about it, and about each other. This is a chance to show that there are people like you who want to share the story of your Fort McMurray - and I strongly encourage you to do so.