Coming Soon to a Wall Near You - Rock Climbing, Baby! 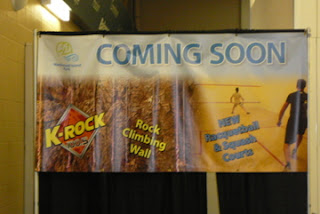 A few years ago when they released the initial drawings for the first renovation and expansion of MacDonald Island I was checking them out with the younger Intrepid Junior Blogger. We noted the pool, and the rinks - and then her eyes spied something special. There, in the centre atrium - was that a rock climbing wall?!?

You see, this Junior Blogger is a daredevil sort. She has in her future plans ice climbing, skydiving, and causing her mother's premature death due to sheer anxiety and terror. She's the kind of kid who never holds the bar on a rollercoaster, and who likes to grab life with her teeth and shake it a bit. She'd already done some rock "scrambling", so the idea of a local rock climbing wall was pure excitement.

Then, of course, when MI was finished I faced the inevitable question: "Where's the rock climbing wall?". Well, it had never been done as part of the renovation, and I wasn't surprised. The atrium seemed an odd place for it right from the start, and frankly the entire MI expansion project had faced a few challenges along the way. The dropping of the rock climbing wall wasn't a real shock, but the Intrepid Junior Blogger was disappointed - and unimpressed.

So, this week when I got an email from Adam Hardiman, MacDonald Island's Communications Co-Ordinator, inviting me to take a sneak peek at the up and coming K-Rock Climbing Wall I said yes. I said yes for a few reasons, among them being that the words "sneak peek" and "grand opening" always draw me in - but also because I knew the Intrepid Junior Blogger would want to know the inside scoop on this (although she was a little bitter that I had been invited - as she commented I don't know much about rock climbing, and an abject fear of heights makes it unlikely I'll ever know much more than I currently do). 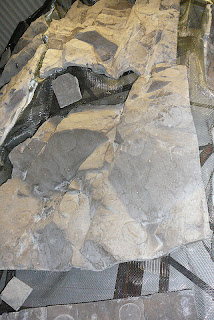 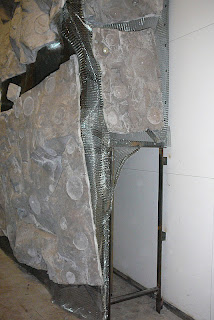 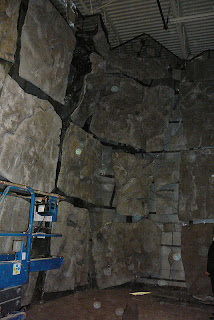 People, I am pleased to report that I think the new rock climbing wall will not only satisfy my Intrepid Junior Blogger but many other people, too. What's really neat about it is that they have built this in the space of a squash court, and yet it feels expansive in a way I hadn't anticipated. The wall is 22 feet high, and takes up three sides of the room. 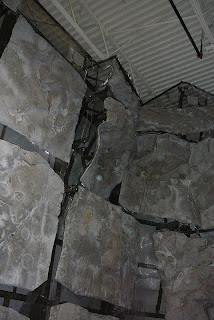 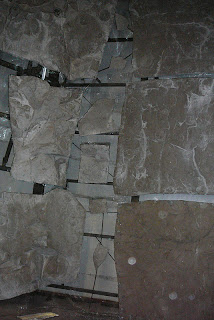 The rock is not what I expected, either. Some rock climbing walls are that lousy plastic stuff, with handholds attached but which lack the feel of real rock. I suspect this means that while you can practice climbing it doesn't do much to help with real rock climbing (I've noted few mountains have built-in plastic handholds). Real rock has rough surfaces, facets into which you can stick a few fingers or toes and secure a grip. In typical MI style they weren't content with a plastic wall with some handholds built in - no, this is a rock wall designed with the look and feel of real rock. I ran my hands across it and the similarity to real rock is amazing. There are spaces for handholds, but climbers will be able to use the surface of the "rock" to practice those skills, too, and have a more authentic experience. The corner areas are especially intriguing, designed to challenge those with more advanced technical skills. 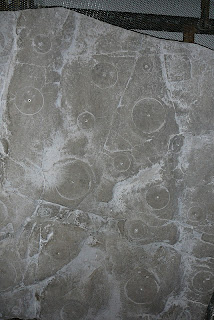 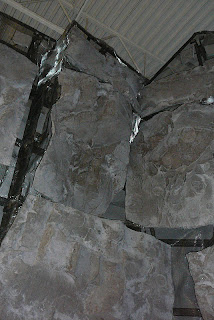 I'm also happy to report that the rock climbing wall is proceeding well and, in fact, ahead of schedule. Those aren't words you hear very often in Fort Mac, and so MI is justifiably proud that they will soon be able to offer yet another activity to the community. How soon? Well, people, the K-Rock Climbing Wall is scheduled to open at the very end of December or early January (in time for the upcoming Banff Mountain Film Festival, an event presented by the Fort McMurray Public Library, and which may well inspire future rock climbers!). 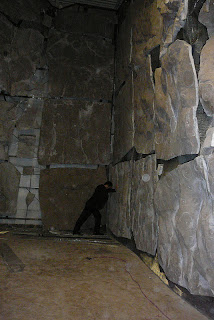 I can pretty much guarantee two things, people. One is that the rock climbing wall is going to be very, very popular - and the second is that if you see a woman standing by the rock climbing wall, covering her eyes, it's quite likely  to be me as my little Intrepid Junior Blogger climbs to the top, her future, and  several years of scaring her mother to death.
at November 17, 2011