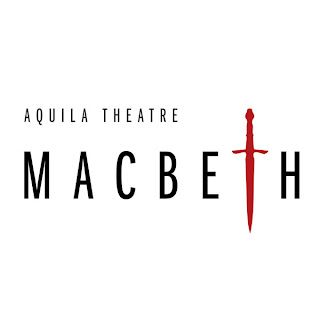 One of the best things about this city has to be some of the opportunities that come your way. A couple of weeks ago my friend contacted me and asked if I would be interested in a backstage tour of the play Keyano was presenting this past weekend - "Macbeth". I said yes, even though I didn't actually have tickets for the play. I suppose I said yes because I just love doing anything unusual, and getting a backstage tour is a bit unusual. As it turns out, of course, I did go to see Aquila Theatre's production of "Macbeth" and I loved it - so the backstage tour I got on Sunday took on an entirely new meaning for me. I was delighted to accompany my friend, one other person, and Keyano's production manager Nick Beach on a brief backstage tour - a tour that gave me some new understanding and perspective on "the Scottish play" as presented by Aquila Theatre.

When I wrote my review of Aquila's production one of the main things I commented on was the clean simplicity of the play. No elaborate sets or costumes, just the actors, some sound effects, some fog, and lighting. As we all know, though, sometimes the more simple something is the harder it is to pull off successfully. For all it's simplicity this play was not "simple" to stage, as in order to achieve that clean and pure ambience they needed precision and darkness. 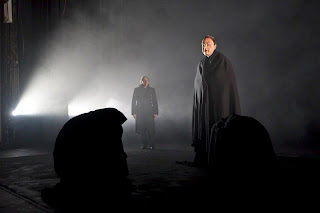 Photo credit to Aquila Theatre
Why darkness? Because in the most fundamental way "Macbeth" is about the darkness of the human soul. The best way to reflect this in the production is to have the stage in almost total darkness, with only strategic lighting used as the action unfolds. Total darkness presents some challenges, people. The theatre company typically travels with a large black dropcloth that they use on the set, but as they flew in they could not bring it. So, Keyano repainted the stage floor with a very matte black paint, designed to absorb any light and not create any "bounce" from the lighting. And the lighting was unique, too, as the action occurs in a fairly small space that uses 16 "squares", lit or unlit, to showcase the actors. The most unusual aspect of the lighting was the use of "sidekicks", a form of lighting from the side typically used in dance shows as opposed to theatrical productions - but as anyone who saw the play can tell you the lighting was incredibly effective.

So, the lighting was phenomenally important, as it is integral to the ambience of the play. So too is the fog, that mist that hung not only over the stage but the audience, too, enveloping you in the sense that you are on the moors of Scotland and not inside a theatre. So delicate was this balance that the machine creating the fog was moved several times in order to achieve the best possible effect. 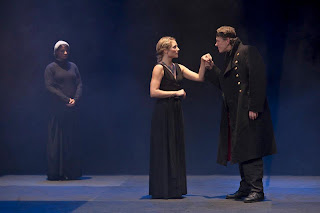 Photo credit to Aquila Theatre
Macbeth is about violence, of course, and I was delighted when I was given the opportunity to hold one of the daggers. Keyano's production manager explained that the daggers and swords were not of the theatrical variety, which are prone to breakage. No, these swords and daggers were made in an actual armoury in Britain, and they have the heft and feel of true weaponry, too.

We were able to see some of the costumes, the black cloth worn by the witches, and the flak jacket-style vests worn in the play. Simple costumes, yes, but again with an attention to detail and an eye to making the play modern and accessible and yet somehow still true to Shakespeare, too. It's a delicate balancing act, this, and yet they achieved it so marvelously. 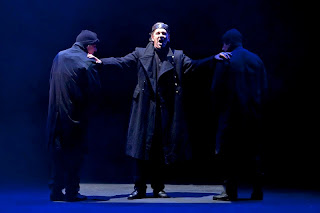 Photo credit to Aquila Theatre
We spoke about the judicious use of colour in the play. The colours worn on stage were black, grey, white, and, in only one scene, red. This careful use of colour again reflects the understated nature of the staging of the production and yet it again shows the meticulous attention to detail. To use a colour too often, like red, would make it meaningless. To use white inappropriately would mar the visual image as well as the unspoken metaphor for what was being said about the scene. To use these colours carefully, delicately balancing them with black and grey and the darkness that is the heart of "Macbeth"? Brilliant. And to use black tempera paint as the "blood" that covers the hands of the murderers? So very, very clever, as the blood then appears as dark as the souls of those soaked in it.

The tour included a bit on the sound technology used (which is something I know so little about as to be laughable) and about the sound effects, which again were used to maximum effect. What kept coming to my mind, though, was that the clean simplicity that I had noted was actually an illusion. What seemed so simple when you sat in the audience was actually a finely choreographed dance of lighting, special effects, sound, and actors. As an audience member you could simply revel in what appeared to be an effortless and pure production, but it's clear months of thought and planning had gone into it. 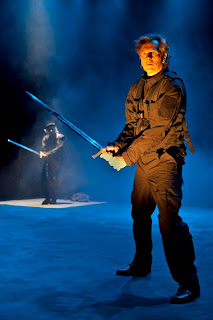 Photo credit to Aquila Theatre
I so enjoyed the presentation of "Macbeth" that I have made plans. I have plans to visit New York in the near future, and I have decided that when I do I will go and see whatever production Aquila Theatre happens to be presenting at that time. You see, this stop in Fort McMurray was their only Canadian destination on this tour. It was also their last stop on a 3-month tour that saw them staging and rehearsing not just one but two productions ("Macbeth" and "The Importance of Being Earnest"). I suppose I feel that if they are kind enough to visit us then I can surely return the favour, and when I am in their home I will drop in and catch some more terrific theatre. I must tell you, people, I'm already looking forward to it.


My sincere thanks to Keyano Theatre,
Production Manager Nick Beach,
and my friend Tracy for making the backstage
tour a possibility!
at November 28, 2011