When I wrote about NorthWord magazine last week I knew that I wanted to attend the launch of the latest issue, which happened to be occurring the same day that NorthWord hosted a Poetry Party at the Fort McMurray Public Library. What is a Poetry Party, you ask? Well, I think fellow blogger/writer Kevin Thornton has summed it up pretty well here, but to further summarize it's fun - with words.

On Friday I had asked the Intrepid Junior Bloggers (aka my daughter and niece) if they would like to accompany me to the party. Being twelve and thirteen you never know what might interest them, and one agreed right away to come. By Saturday morning they were both on board, and so off we went to explore the world of poetry.

Now, the FMPL is one of my favourite places in this city, and has been since we moved here almost a decade ago. Going there is always a happy occasion as it means new books, but on Saturday the second floor had become poetry central. There were several stations set up, each featuring different kinds of poetry. The first we visited was the "Word Window", the idea being to look out the window and use what you see as inspiration for a word to be used in a poem. The trees are in their full autumn dress of gold, of course, so that word was prominent, but people contributed other words, too. My contribution was "glowing", as the trees simply seemed incandescent in the bright fall sunshine. 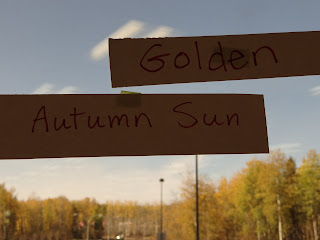 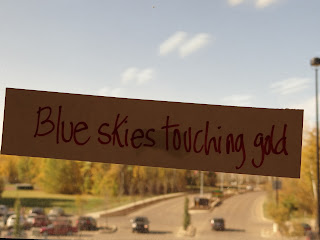 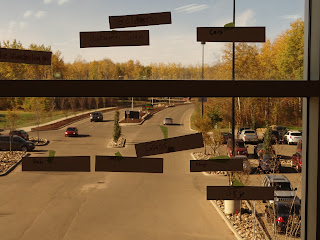 Our second stop was Poetry on Demand, where you gave the poet an idea and some descriptive words, and they would produce a poem. Now, being a writer who occasionally struggles to "find the words" this impressed me, and we had to give it a try. My daughter suggested the topic of Ireland, a country we visited this year, and that made a deep impression on all of us. She provided a few descriptive words, and within minutes she had in her hand a lovely poem that mentioned castles and stone fences, sheep and pubs, and all those things that mirrored all the good feelings she had in her heart for the Emerald Isle. I asked the poet if she'd ever been to Ireland, and she said she had not - and yet she had produced a poem that felt as if she had been there several times. 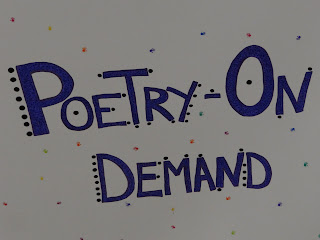 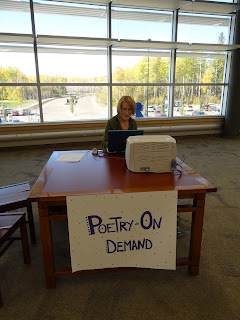 Our next stop was the Limerick station, where local limerick master Kevin Thornton was creating these little masterpieces. I mentioned we had been to Limerick and been profoundly disappointed at how few limericks people there actually told (just kidding, people, I didn't really expect the Irish to walk around starting sentences with "There was a young man from Cork..."). Kevin pointed out, however, that limericks had become quite famous as no one has ever heard of "Galway poetry". This time it was my niece's turn, and she gave him her name to use in the limerick. Now, my niece has an unusual name, and it stumped Kevin for a bit to find an appropriate rhyme, but within a short time frame she too had a poem in her hand written just for her. By this point both the girls were delighted with events so far, and we had just begun. 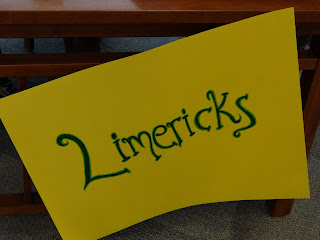 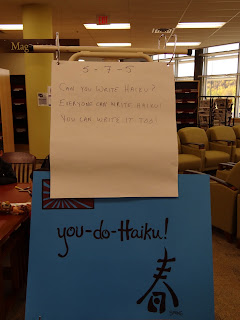 We stopped briefly at the You-Do-Haiku station but realized that we felt a bit depleted in terms of ideas for a haiku and it still felt a little too early in the day for potentially complex rhyming, so while we tried we came up with no haiku worth recording. Next up, though? A station where I think the Intrepid Junior Bloggers could have spent hours - Ransom Poetry. 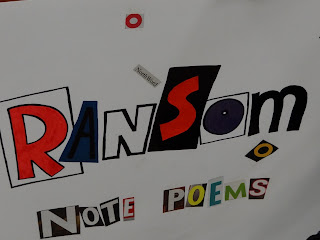 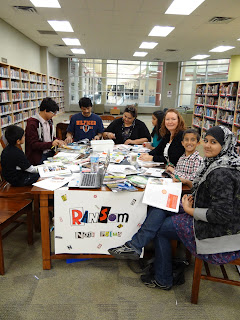 The entire concept of Ransom Poetry is, in my opinion, awesome. You cut words out of magazines or newspapers, form them into a poem, glue them onto a piece of paper, and voila! Instant poetry. I noted different strategies - some people would look for specific words to fit their poem, and others would simply cut out words that sang to them and then fit them together in whatever manner felt right. The result? Well, in my niece's case, this: 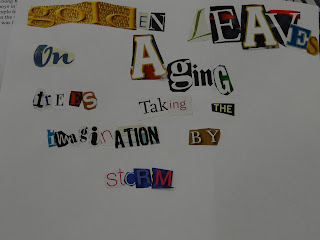 I just loved seeing the works in progress as random (and some carefully selected) words began to fill the table: 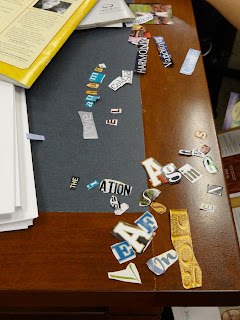 I think the Intrepid Junior Bloggers enjoyed the Ransom Poetry most of all, but there were other things to see and do, too, like the List Poetry: 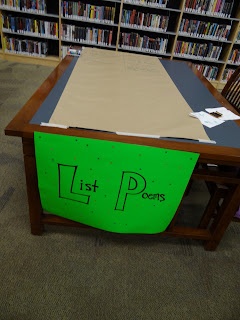 NorthWord had a table set up to sell copies of the magazine, including the latest issue, and there was coffee and juice and treats (and to whomever made the chocolate chip oatmeal cookies - thumbs up, the Intrepid Junior Bloggers and I loved them!). There was a silent auction table (and I'm pleased to say I was the winner of two items, lovely bracelets - there is a reason I am nicknamed "the crow" by my family, that reason being my weakness for the sparkly shiny things in life). 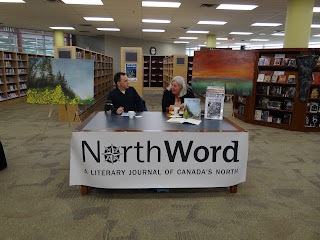 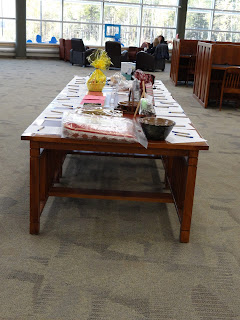 On display there were two artworks by local artist Megan Storrar. One of them also graces the cover of the latest issue of NorthWord. I am a huge fan of Megan's, and I am proud to say I own one of her beautiful works. 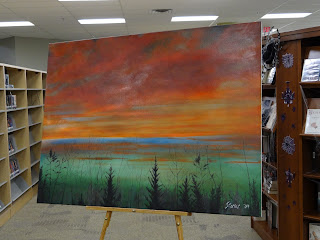 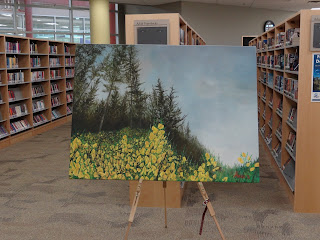 So, final summary of the NorthWord Poetry Party? Words made fun, people. When an event entertains a twelve year old girl who loves fantasy novels, a thirteen year old girl who loves anime, and their considerably older adult companion, then you know it's been a success. We all had a brilliant time at the party, and I would like to thank NorthWord for hosting such a terrific event. So, people, let's make sure they can host many more of these. How? It's time to go pick up the latest issue of NorthWord. Copies are $9.50, and can be purchased at the Keyano College Bookstore, Coles, Sunshine Cafe by Mitchell's in Syncrude Sport and Wellness Centre, Frames and More, the Airport Gift Shop, and the Heritage Park Gift Shop. If you were at the Poetry Party then you know what a great time it was, and how much love these folks have for the written word. If you didn't make it to the party you can still be part of it, though, by reading the magazine and seeing northern talent shine. Go grab a copy of NorthWord, settle in for some good reading, and enjoy the results of the hard work by the producers of NorthWord. You'll be glad you did - guaranteed.