WBBDI and Marketing in the New Millennium 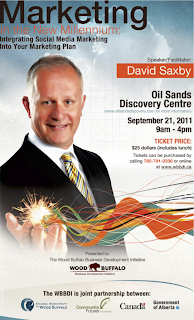 It seems only reasonable that I learned about the seminar in the title above through Twitter. After all, the seminar hosted by Wood Buffalo Business Development Initiative was all about using social media as a marketing tool, and how to effectively incorporate it into a marketing and communications plan. So, how did this blogger who is employed by no one end up there? Well, endless curiousity, of course, and also a desire to see how what I am doing connects with others in our community - businesses, organizations, and non-profit groups.

So, I found myself at the Oil Sands Discovery Centre to hear David Saxby, marketing guru, give a presentation on social media as a marketing tool. I discovered I was in excellent company, too, with representatives from most of the major businesses and groups in the city - Keyano College, local banks, realtors, non-profit groups, and entrepreneurs - attending. It was an eclectic group,  but all had a common goal - how to use this brave new world of Twitter and Facebook, blogs and LinkedIn, to maximize their public exposure.

David Saxby might have his roots in traditional marketing but he has clearly embraced the new landscape of social media, and knows his stuff. I was delighted with the examples of effective social media he mentioned (among them the campaign for mayor in Calgary that ended with Nenshi elected when he was very much a dark horse at the beginning, and the advertising coup that was the "Best Job in the World" contest in Queensland, Australia). While some at the seminar were familiar with these examples some were not, and I could see little lightbulbs going off as they began to realize just how effective social media can be.

The afternoon was spent in a working session, and as many participants had brought laptops we were able to practice some of what we had learned. I think that many walked away with a new appreciation of the role of social media, and a better understanding of how to use it effectively and efficiently.

Now, to me what is best about much of social media is that it is free. You can have a page on Facebook, a Twitter account, and a blog, and have it cost you absolutely nothing. The true beauty of this is for non-profit groups that operate under very tight budgets, but still need to reach the largest audience they can. Social media has huge potential for them, although the down side is, as always, finding the time to use it.

I also wanted to say a few words about the WBBDI, which is a group that I think deserves some mention. This group was formed initially to help retail businesses, but then changed their directive to encompass all small and medium sized businesses in the RMWB, and to help them to achieve their business goals. They do this through an IADR approach, which summarized means Informing businesses of marketing strategies, Attracting qualified employees, Developing the knowledge and skills of the existing workforce, and helping businesses learn to Retain their employees. This seminar was a great example of the assistance they provide to business owners, and for a cost of $25 I think most attendees walked away with new ideas and strategies worth far more in the long run.

So, people, I went to a seminar, I learned about the effectiveness of social media (okay, I'll admit, I already knew about this aspect because I've been doing it for awhile now, and because I have a keen interest in it), I had a great lunch catered by the Sawridge, I learned about the WBBDI, I met a marketing genius who embraces social media, and, best of all, I met some people in our community who are of that passionate and visionary kind I love - business owners, marketing professionals, entrepreneurs, and employees of non-profit groups. I had a chance to meet some of the people in our region who work in all these fields, and it made me realize what truly amazing people exist in this community. There are some remarkable people in Fort Mac - and last week a few of them were in the theatre at the Oil Sands Discovery Centre talking about Twitter. It's a brave new world indeed. 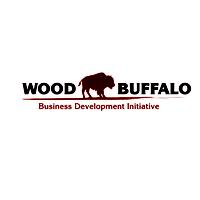