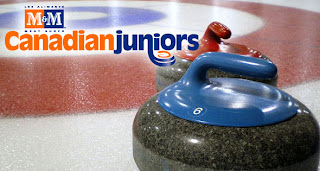 You know, it seems like I spend an awful lot of time at MacDonald Island these days. I go to the gym there, so that's pretty much a daily visit. Library for new books and great free wi-fi, at least once a week. At least every couple of weeks for lunch at the Fox Den (I love the quiet ambience, looking out over the golf course). And finally I'm finding myself there a lot these days for press conferences. That seems to be an almost weekly event lately too, but I'm not complaining - because with each press conference comes great new things.

I attended a press conference at Mac Island yesterday, and the announcement? RMWB will be hosting the 2013 M&M Canadian Junior Men's and Women's Curling Championships. This is pretty exciting stuff, people, and exciting for a variety of reasons.

Local lawyer and RMWB councillor Don Scott was the bid committee chairman representing our region, and he explained that this entire thing began when Tim Reid, Mac Island Chief Operating Officer, asked him to a meeting in Tim's office. Don said meetings with Tim often involve such ideas, and the hard work that follows (I've made note of this, incidentally, and if Tim ever asks to meet with me I will be intrigued but may just have to be "busy" that day). Fortunately Don was the exact right person to ask, and he took on the task of helping to formulate a bid for the championships. Now, there have been so many of these exciting announcements recently (pro baseball, 2015 Western Canada Summer Games) that I worry that people will begin to think that attracting these events to our community is effortless - it is not. A great deal of work goes into those ventures, and a lot of commitment, too.

So, to pursue our chance at these championships a bid committee was formed, our proposal was submitted, and it was, in the end, successful. Now we get to the exciting part. This championship will mean that our community will play host to teams of curlers from across the country. From January 31 - February 10, 2013, 26 teams of young curlers will visit our city. In the past famous curlers such as Kevin Martin, Brad Gushue, and Jennifer Jones have competed in these championships. Our city will be hosting the future greats of the Canadian curling world, of that there is no doubt. But there is more to it than that - our community will be hosting potential ambassadors for our region.

You see, in my mind every person who visits this area is a potential ambassador for us. They may come with pre-conceived ideas about who we are, and about what we do - ideas gleaned from the national media. Many of these ideas are negative, and many of them are, quite frankly, misguided. So, every time a new group visits what I see is an opportunity for us to showcase who we really are, to show them our big spirit, and to show them what Fort McMurray means to the people who call it home.

So, what I know about curling would fit in a thimble. I was in a curling league once, although it was more of a drinking league where we occasionally curled (and thus it didn't do much for my understanding of the sport, my skills, or my liver). I know that I like curling, I know it's as Canadian as beavers and maple leaves, and I know that there is a passionate following for this sport. And there's the other opportunity, people. Guess who is coming with the championships? TSN, that's who.

Yes, we will also be hosting a crew from TSN, who will be covering the championships. This is yet another huge opportunity to showcase our region and to show the entire nation who we are. One of the taglines for this blog, and my personal mantra for it, is "telling our own story". I think we, the citizens of Fort McMurray, need to seize every chance to tell our own story to the world. We cannot and should not entrust our story to drive-by journalists and expect them to tell it well or accurately. If we want the world to know who we are then we need to tell our story - and having a crew from a national sports network here is just another opportunity.

So, people, we will host a junior curling championship, and we will be able to enjoy some amazing curling. We will see some future curling stars in our city, young people that you may see curling for Canada in the Olympics one day. And, to me, even more importantly we will be hosting 26 curling teams, their families, and an entire nation of TSN watchers. This is a huge opportunity for our community, whether you are a curling fan or not. I'd like to thank Don Scott and the bid committee for making it happen, and Tim Reid and everyone at MacDonald Island for ensuring we have the kind of facility that makes it possible. I know, I've told you all that I'm not a sports fan - but in early 2013 I'm pretty sure you can find me in a local curling rink, watching some fine curling and helping RMWB to tell our own story. I hope you'll join me there, Fort Mac! 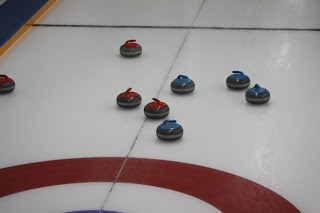