2011 State of the Island (Or, "Why MacDonald Island Park Is The Heart of Fort McMurray") 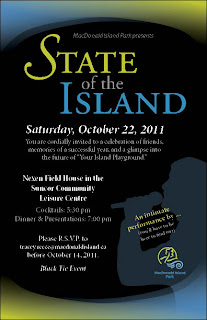 This past week I opened the email associated with this blog and discovered a message from MacDonald Island Park. It wasn't just any email, either - it was an invitation. Now, I love invitations and I was very excited to see that I was being asked to attend MI's "State of the Island" gala event. I immediately replied that I would love to come, which is how I found myself at what I affectionately call "my second home" last night.

I've written before about spending a lot of time at Mac Island, and it's true. Over the years we have lived here it's become very central to our lives. For years my daughter did figure skating lessons there, which meant I was there 3 times a week. Now that it houses the Total Fitness Centre (my preferred place to attempt physical fitness), the library, the Fox Den restaurant, and the water park I'm there almost daily. This means I am developing a vested interest in the future of Mac Island, and thus being invited to this event meant a great deal to me. You see, "State of the Island" is where Mac Island looks back on the last year, "presses pause" (as COO Tim Reid said last night), and reviews their progress. It's also where the future of Mac Island is showcased, so to be there last night was an honour.

I arrived at Mac Island shortly after 5:30, and here is where you will find my only complaint about the night. The line-up to get into the event stretched back to the main doors as they were checking everyone's name on a computer and list and telling them their table number. This process was a bit tedious, and for women standing in 4 inch heels a bit excruciating. I think a seating chart with attendants to answer questions might have been the better option considering there were 570 guests waiting to get in, as most people are quite capable of reading a seating chart (and that seems to be standard at most galas). Anyhow, that's a minor quibble and while waiting in line I chatted with some of the new people I've met recently in my city.

Upon entry to the gala I found myself in a delightful little cocktail lounge - once again set up in a field house. It's almost like someone waves a magic wand over these places, as what hours before was full of soccer players was now a softly lit bar filled with residents wearing their finest. Mac Island's wonderful and charming Director of Hospitality Naved Noorani handed me a blue cocktail, and my evening was off to a roaring start indeed. I mingled and chatted with various folks, including a couple of the ladies from The Hub, those same ladies who stole my heart when they allowed me to share their table (and their fun) at the recent Harvest of Hope dinner.

When we were called in to dinner I found myself seated with a direct view of the stage, and with three other couples. I found myself alone once again at this event, as my husband was away and my best friend unable to come due to illness, but it was not long before I began to chat with the people at my table. Once again I found a variety of stories, people who had been here for decades, and those who had been here for much less. It's one of the things I love about this community, really, and a true joy to just hear others tell me their stories of life here. 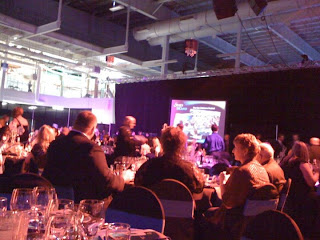 I must comment on the meal, as I must admit in previous years I have attended banquets at Mac Island that were disappointing. Not so this year, though, as new Executive Chef Jaimeet Kathuria has clearly raised the bar. The food was excellent, with variety galore and quality shining. There was a panko-encrusted eggplant dish that completely captivated me, as I'm not a fan of eggplant and anyone who can make it enjoyable has my appreciation. Later in the evening I had the opportunity to meet Jaimeet and to tell him of my pleasure with the quality of the meal, and I meant every word. I think with him in charge food services at Mac Island will see significant improvement as he brings an entirely new set of standards with him (and he makes a mean vegetable sculpture, too, which apparently he spent hours on when everyone else in this city was sleeping - true dedication, people, to spend that much time on a centrepiece of food that no one will eat).

Before and after the meal there were the usual speeches, of course. MLA Guy Boutilier was in attendance, as was our lovely mayor Melissa Blake. Their speeches were short but focused on the importance of Mac Island in our community, and I can't help but agree with them. In my own life Mac Island has become a focal point, and I suspect this is true of many others, too. The chair of the Mac Island board of directors spoke, too, and I was interested to hear from him as I think this board is quite bold and visionary, which are qualities I admire, and which I think we need in this community. The real address I was waiting for, though, was from Tim Reid, someone I have come to know and truly respect, and who I think is responsible for a great deal of Mac Island's success. 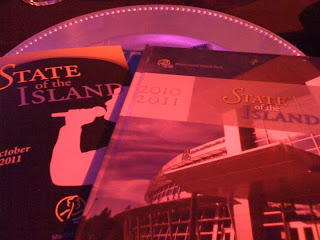 Tim's "State of the Island" address was terrific. It contained a lot of numbers, like feet of lawn mowed at the golf course, and numbers of dives off the diving boards at the water park. It contained numbers like how many people were members (with 76% of the membership being annual members, which is an astonishing number). It spoke of the significance of the date of October 30, which is when the island closed for renovations in 2007, and opened two years later on the same date (and if anyone recalls those renovations did not come without some degree of pain and frustration). Two numbers truly stood out to me, though. Those numbers? The number 1 - Mac Island being the single largest recreational facility in Canada. I had no idea about that, and I was astonished. The second number? 1.8 million - the number of visits to Mac Island. As Tim said, where did all those people go before Mac Island? What were they doing? That number actually had me speechless for a bit (and people, speechless is NOT a usual state for me). One of the other things Tim mentioned in his speech was heart - and about Mac Island being the heart of our community. And you know what? He's absolutely right.

There were so many other things last night, too, like Brian Hatfield, one of the key organizers of my now -beloved "Kids Forever" being honoured for his years of volunteer service to this community. There were announcements of the Oil Sands Trade Show and the Fort McMurray Board of Tourism Trade Shows being signed to deals committing them to Mac Island until 2020. There were announcements of corporate sponsorships and new ventures, like the ATB Financial MI Day, which will see 1500 students attend Mac Island every year to experience the recreation it offers - as part of their curriculum, and free of charge to them. There was so much that it was a bit overwhelming, and so much that there is far too much to share here.

After all the speeches were done it was time for the "surprise" musical guest, a well-kept secret although rumours had been flying for days. It was a delight to find out it was Albertan Paul Brandt, and he performed an acoustic, solo set of songs. Now, I've said I'm not a country fan, and it's true - but his performance was heart-felt and intimate and lovely, and I was mesmerized by every moment of it. I think all the other non-country fans felt much the same, too. 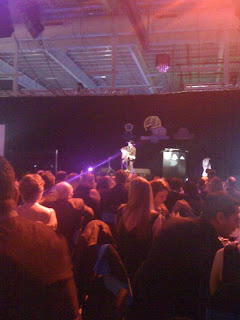 I ended my evening very late, talking with two friends, one I've known for some time and one I've just met. One has been in Fort Mac for decades, and one for mere weeks. I looked at them and was reminded of why I love this community. I went to the gala solo but wasn't alone for very long, and didn't have a second of boredom. I met new people and ran into old friends. I enjoyed an evening both looking back at the past year for Mac Island, and envisioning the future. I saw the heart of Mac Island, which is not really the building at all but Tim Reid, the MI team, the board of directors - and all of us, people. We, the community of Fort McMurray, are the true heart of Mac Island, and we have just decided to let Mac Island be the place we keep it. I think our heart is in very good hands, people, and last night's "State of the Island" gala assured me of all that.

One of the songs Paul sang last night captured my attention. It is called "Small Towns, Big Dreams", and I couldn't think of anything more fitting for this community, and for MacDonald Island. What started years ago as a dream has become a world-class facility, a legacy to a man named Chuck Knight who probably never could have anticipated what it has become. What  began as a small town is becoming a true urban centre where it seems that anything is possible, and where such dreams can come true because there is opportunity and potential and the people to make it happen. I saw that all over again at MacDonald Island last night, people, and all I can is that the state of the island, and of our community, is mighty fine indeed.

My sincere thanks go to MacDonald Island Park
for inviting me to attend the "State of the Island"
gala. It was a privilege and an honour to attend!
at October 23, 2011