I freely admit it. I'm a big fan of our current city council, but I haven't attended a city council meeting since the election in 2010. It's not due to a lack of interest as I actually have a keen interest in the operation of our civic government, but more a matter of lack of personal time. Last night, though, I packed up my iPhone and iPad (and even my old fashioned pen and paper) and headed down to the Regional Municipality of Wood Buffalo council chambers to check out democracy in action.

Over my life I've attended sessions of various levels of government, from federal to provincial to civic (in Toronto and Saskatoon). They all follow fairly similar formal rules, of course, and often even the issues are similar from place to place. There are people who find these sorts of meetings boring, but not me. I find them entertaining, from reading the nuances of the facial expressions of various councillors to listening very carefully to their words to see if they represent us well and are asking the right questions (in my opinion our current council is doing very well in this regard, people).

Last night a few different issues were discussed, including River Bend Point (a new housing development slated for Abasand). There was no real "debate" but rather wide-ranging discussion, and it was clear that council is well informed and pretty much on the same page when it comes to local developments.

I think there was exactly one thing that troubled me about our city council, though. I looked around the council table and saw mostly male, white faces. Now, I have nothing against white men (I happen to be married to one). Our city, though, is becoming very diverse. We have a female mayor, and one female councillor. We have First Nations representation on council, but no other identifiable ethnic group. And those two lone women at that table shouldn't be the two lone women, either. Where are the other women in our community who I KNOW have the skills and community interest to sit on council? Where is the representation from our ethnic communities? Here's what I'd love to see next election - a flood of women and ethnic candidates all running for council. They won't all make it in, of course, but I think the time has come for council to reflect the diversity of our city. The only way for that to happen is to encourage candidates from those groups to pursue a seat on council, and this is my official encouragement for them to do so. Your time has come!

Apart from that minor quibble, though, I enjoyed the council meeting. Some might see this as very dry and dull stuff, but this is the stuff that constitutes the running of our city. This is where decisions that impact all residents are made. I was pleased that there were several members of the public in attendance last night, but most appeared to be from special interest groups related to the agenda. What I'd love to see is just average, regular Fort Mac citizens in those chambers watching our local government perform. It gives you a different sense of this city, to watch these meetings and to see how these decisions are made. And who knows? Maybe it will inspire someone to make their own run at city council and to serve their community just as these current councillors and mayor are doing.

You can catch the next meeting of council on October 25th, 6 pm, at the Council Chambers in the Jubilee Centre on Franklin Avenue. You can also watch archived broadcasts of the meetings as well as live broadcasts during the meetings. Agendas of future meetings and minutes are also available online. My suggestion, though? Come on out to a city council meeting and see democracy in action. Maybe you'll learn something about the functioning of our city - or maybe you'll just catch a councillor eye roll or two that makes you snicker a bit. Regardless, it's a couple of hours well spent, people, if you want to know what's really going on in this crazy, exciting, growing place we call home. See ya in chambers, Fort Mac! 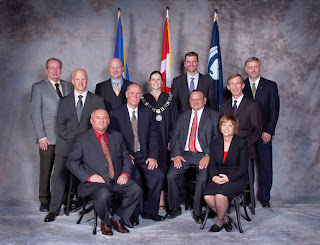