Pocket Retweets, Apologies, and the Nature of Mistakes 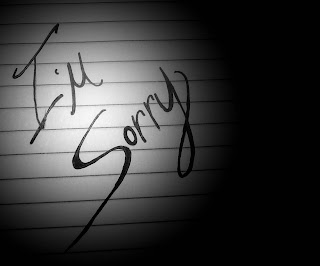 You know, life is always interesting in Fort Mac, and this week has been particularly interesting for me personally. It began with a kerfuffle on Twitter that somehow involved me,  the incorporation of a new word into my vocabulary (pocket retweet), and ended with an apology - and some thoughts on mistakes.

I received a phone call yesterday from the city councillor that I wrote about on Wednesday. I had debated long and hard over blogging about that original incident, as it was clearly an event of the "tempest in a teapot" kind,  but it had happened in my teapot, and I'd been caught in the storm, too. I had been quite angry and disappointed over this incident, but I try to be a reasonable person, and I don't believe in carrying grudges. I think they are harmful, both personally and professionally, and so when some of the councillor's friends approached me to ask if he could call me of I said yes, of course.

Apologies take courage, people. Sincere, genuine regret is truly rare, but I feel I saw that yesterday. An error in judgement occurred. It was compounded with a "pocket retweet" joke gone wrong. The words on a social media forum carried far more weight and had more impact than had been expected. And, in the end, there were lessons learned.

You see, I believe we are ALL responsible for what we say and do - whether we are city councillors or bloggers. I know that some day I will make an error in judgement, and I actually hope that if I do I am called on it. I hope that those who point it out to me will give me a chance to apologize and rectify it, but even if they don't I know I will learn from the experience. It might be uncomfortable, it might be embarrassing, and it might even be a little painful - but growth can be all that. In the end, though, if you walk away with a lesson learned it's worth it all.

I consider the pocket retweet matter over. I accepted the apology offered, and I hope I helped the city councillor (who seems like a nice man, and who I have always respected prior to this incident) feel better about it, too. I don't enjoy making people feel badly, but I will hold them accountable for their actions and words, particularly when they affect me. I recognize, though, that we all make mistakes. This week it was the turn of a city councillor - next week it might be mine. I hope that when my turn comes that I am able to show the genuine contrition I was shown. I hope that when my turn comes that I can take that deep breath, pick up that phone, and say "I'm truly sorry". For that, people, takes strength of character and courage - and I hope I have those qualities in the same measure as the councillor who expressed his sincere regret to me.