"Not Just a Boom Town, It's A Home Town" - Premier Alison Redford in RMWB 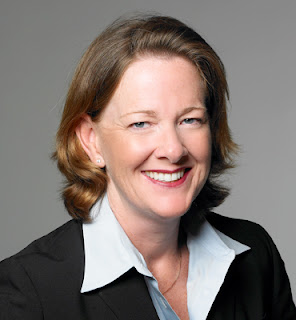 If you read this blog on a regular basis then you may know that I don't consider myself a political sort. Oh, I like politics in a general way, and I have opinions (I have LOTS of opinions, people, LOTS), but I don't consider myself particularly astute when it comes to political issues. I know the general issues but if you want to discuss the fine points of some hot political topic I probably won't be able to contribute much. Despite all that, though, I do have a keen interest in the political world, and for me it's more about the character of those involved in it. I may not be politically astute but I like to think I'm a fairly good judge of character, and thus my thoughts on politicians - and their value - is often based on a certain gut instinct about them. This was certainly true when I attended the PC Leadership Debate that was held here in Fort Mac a few months ago, and at the time I wrote about the two candidates who impressed me most that night. One of those candidates was Alison Redford, who is now, of course, our premier.

I had the opportunity this week to hear Alison speak again. I hadn't planned to attend the local Premier's Dinner, as to be honest I thought the tickets prohibitively expensive (and money that I could donate to a local charity as opposed to hear a politician). I recognize it serves as a party fundraiser and that one pays a price to hear our premier at such events - but to me the price seemed a bit high. I was both surprised and delighted, though, when I received a phone call from Donald Scott's assistant (Don Scott is, of course, a RMWB councillor and local lawyer) telling me that he had kindly and generously purchased a table so all the local media could attend - and I was one of those invited. I accepted, of course, and thus I attended the Premier's Dinner at the Sawridge on Thursday night (if you are keeping track that means I ate both lunch and dinner at the Sawridge that day, which makes my renewal of my MacDonald Island gym membership that very same day very opportune indeed).

I arrived at the Sawridge a bit early as I knew it was going to be packed. The dinner had sold out, which I think is terrific as it shows our tremendous community interest in government and how it affects us. I got my name tag and began to mingle. Politics isn't my thing, as I've said, and I tend to find myself a bit uncomfortable in that atmosphere (and I always wonder if they realize how I probably lean quite far to the left compared to most people in this province - one doesn't escape a childhood in NDP Saskatchewan and young adulthood in liberal Toronto easily, people). It was nice, though, as I began to run into people I know a bit and I was able to chat and blend in fairly easily. I even chatted very briefly with a couple of the MLA's who had accompanied Alison to the city (and there were several who made the trip, which I think speaks volumes to the importance of Fort Mac in this government).

I had met Alison Redford at the leadership debate. I introduced myself to her then, and I was struck by how genuine she seemed. She said something to me that night that I wrote about, and that has stayed with me ever since. She said that when she thinks of Fort McMurray she "gets goosebumps". It seemed to me to be the most sincere and authentic thing any of the candidates said that night, in fact. One of the other candidates had said that he "woke up every day thinking of Fort McMurray" and I must admit I didn't believe it for a heartbeat. But when Alison told me about her goosebumps I could sense her sincerity - and I believed her, too.

One of the other things I noticed when I met Alison the first time was how similar we are in some ways. Our gender, of course, but we are contemporaries in age, too. We are both parents of young daughters. And, sadly, we now have even more in common as we both lost our mothers very unexpectedly, mine three years ago and hers only very recently (a pain which must still be so fresh and sting so deep, a pain I know so well and that I wanted to express my sympathy for, but which I also know to be so private and deeply held). So, I saw in Alison a bit of an equal in some ways, although also someone who has done far more in this world than I, and someone to hold up to my daughter as a role model, regardless of the outcome of the leadership race. When Alison won the leadership I was not surprised. I always thought she might be the dark horse candidate, but that she had something genuine and authentic about her that impressed people, as it had impressed me.

So, being able to listen to Alison at the Premier's Dinner was a delight. She spoke of many things, of course, but made no grand and sweeping promises. She spoke of her commitment to education, health care, local infrastructure, and resource management. She spoke of Alberta being opportunity, and about Fort McMurray being the "beating heart" of the economy of this province (and people, there is no doubt this is true). She spoke of her commitment to making our province better, and using a thoughtful approach to governance that creates a prosperous and healthy future for all Albertans. She said two things that struck me most, though. She said that we are a visible symbol of the courage to create and imagine a future. And she said this : "Fort McMurray is not just a boom town, it's a home town". People, at that very moment I knew she got it. She understood that we are not just a community of contract workers and drive-by journalists. She understood that we are a community where we raise our families. She got that some day children like my daughter will look back from wherever they end up in this world and refer to Fort McMurray as their "home town". Alison Redford gets it, people.

After her speech was over there was a brief and very civil media scrum (I must admit the traditional scrums, with microphones shoved in faces and media types jockeying for position aren't my thing - I'm a writer who doesn't even carry a recording device!). I asked no questions during the scrum, being content instead to listen to our premier answer questions from others and watching her response. What I saw was a woman who is incredibly intelligent and astute, but one who freely admits things she does not know. She answers questions honestly, quickly, and with confidence. What impressed me most, though, is that I think she's a very nice woman but also has a steely determination, the kind of determination you want in the leader of a province that may see some turbulent times ahead. I saw a woman who has been premier for 3 very short weeks but in that time has grasped the leadership. I saw, quite frankly, a premier that made me proud to be Albertan.

After the scrum I noted that Alison stopped in the hall outside. Why? To speak to the young boys running the coat check at the Sawridge. I have no doubt this thrilled them, and it impressed me, too. It showed an interest in everyone, not just those of voting age, but in all Albertans. I would also note that later that evening I saw our mayor, Melissa Blake, do the same thing at the coat check, chatting with the boys, and I was struck by the similarities between our mayor and our new premier. They are, both of them, mothers and professionals,  and women of vision, passion, drive, courage - and authenticity. They are both women who have earned my respect and admiration. They are both women I hold up to my daughter and say "See? See what you can do and be?".

Just before I left for the evening I stood in the line to speak with Alison. Many had brought cameras to have photos taken with the new premier, but I brought no camera. I didn't want a photo, you see. I wanted to congratulate her on her new role as premier, and when my turn finally came, I did. She remembered me from the leadership debate (and even commented that she reads me on Twitter all the time, which pleased me deeply). I told her I was proud to have her as my premier, and that she is a role model for my daughter - and I am, and she is.

There was a moment Thursday night I will never forget, people. As I listened to Alison deliver her speech, as I listened to her speak about Fort McMurray, I sensed that odd pricking sensation on my arms. I realized that I was getting goosebumps, much like the ones Alison said she gets when she thinks about our community. I too was getting goosebumps, but not from thinking about Fort Mac. I was getting goosebumps listening to our new premier as I began to realize how much I respect and admire this woman, and as I realized how very much I want her to lead my province into that future she described. Fort McMurray might give Alison Redford goosebumps, people, but it is Alison herself that gives me those same feelings. I might not know political issues in depth, but I trust my instincts - and those goose bumps told me that our new premier is someone very, very special. They told me that she is, indeed, the premier for the brightest possible future of Alberta. So, in the final analysis, Alison Redford gives me goosebumps, people, and I'm trusting them - and her.