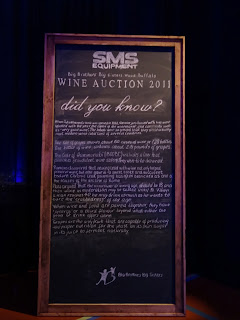 Well, people, I am discovering some perks to this unpaid blogging job I seem to have fallen into - and one of those perks is being able to attend local events not as a guest, but as media. Why is this a perk? Because it's a different side of the event, the media angle, and I can walk around with a camera and not be thought of as strange. Two weeks ago, on a whim, I contacted the people in charge of the SMS Big Brother Big Sisters Wine Auction and asked if they would be interested in having me at the event. They kindly extended an invitation and a media pass, so my camera and I headed off to the Syncrude Sport and Wellness Centre to check it out. I expected it to be fun and entertaining and nice - I didn't expect it to be  what it was - spectacular! 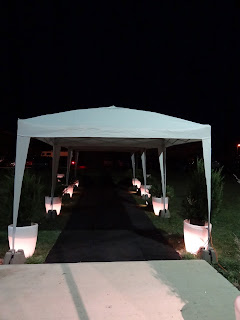 Now, to establish some personal credentials. I have been to some of the finest cocktail bars in Canada  (in Vancouver and Toronto). I have also had drinks at what could be arguably considered the finest cocktail bar in the world, the astonishing Beaufort Bar at the Savoy Hotel in London, England (a place where £40,000 of gold leaf adorns the walls, and where international celebrities and royalty choose to swill a martini). So, I like to think I can appreciate a lovely ambience. When I arrived at the Wine Auction the ambience I found exceeded all expectations. The field house, an indoor sports field really, had been transformed with black curtains, white couches, soft lighting, chandeliers, floral arrangements, and wine bars. It had the true feel of an elegant cocktail bar in any large city, and I was completely delighted - and amazed. The effort and attention to detail was incredible, and it evoked all the best feelings I'd had in any swanky bar. 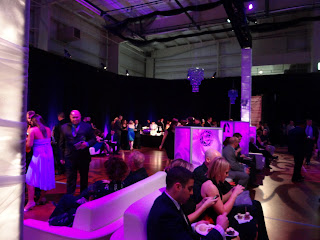 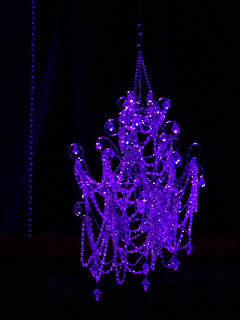 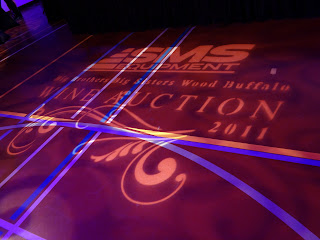 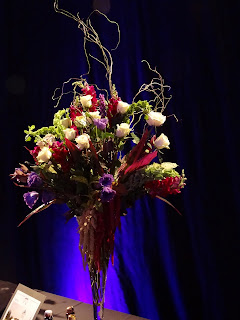 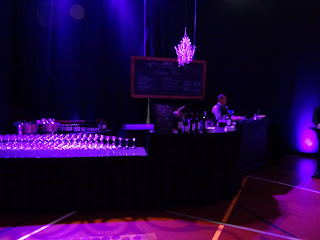 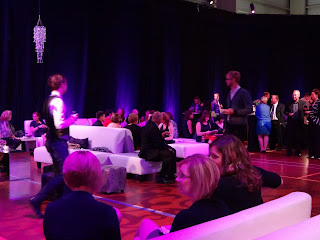 There were dozens of silent auction items from wines to craft beers to furniture to Kopi Luwak coffee (if you aren't familiar with this item it is a very rare, very expensive coffee made from coffee beans that have been eaten by the Asian Civet cat and then excreted - and yes, that is a euphimism for "pooped"). The variety was amazing, and silent bids were being written in fast and furious as I watched. 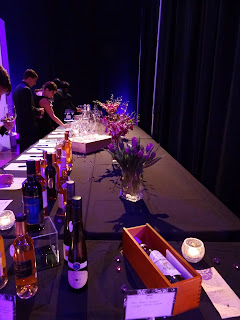 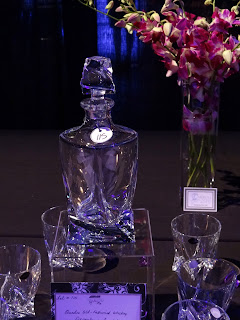 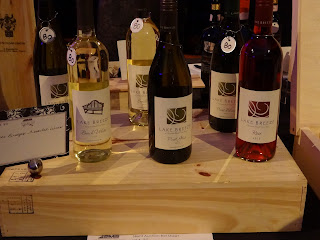 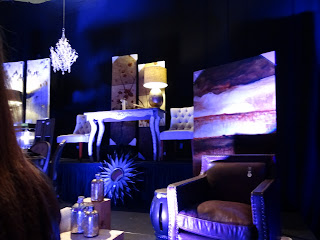 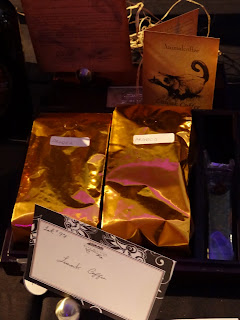 Then there were the items for the live auction. I walked around that table viewing the items and being just slightly more stunned by each one. The guitar signed by Shania Twain. The rare wines with the beautiful labels. The port from 1932 that had been hidden away during World War II. The one that really caught my eye, though, was the bottle of Barbeita Madeira (Portugal) from 1834. 1834?!? I was astonished and even though my knowledge of wines is zero I became quite covetous of that particular bottle - just to own something that had seen that much history, really. The retail value of those last two items? "Priceless", the sign said - and I'd have to agree. Just to hold that kind of bottle in your hand is to touch history. 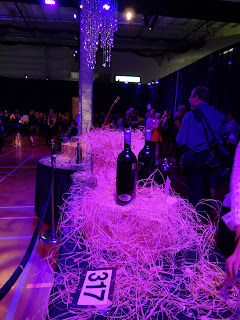 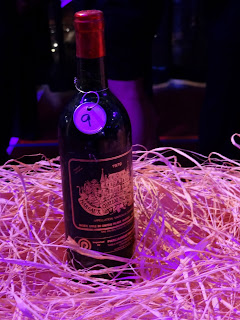 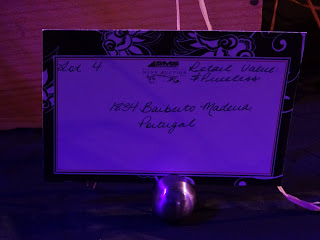 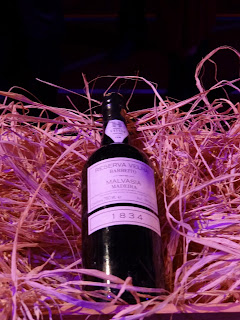 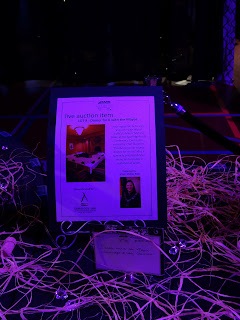 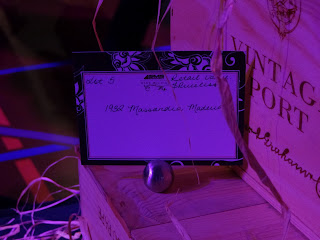 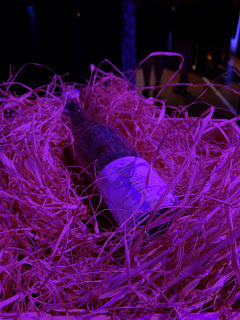 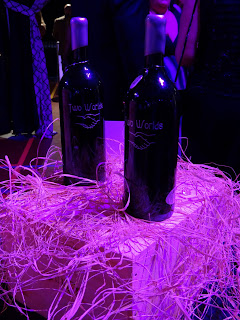 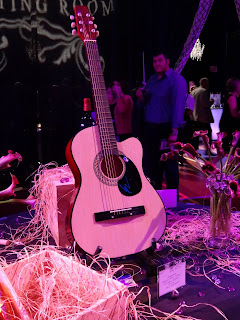 There was live entertainment in the form of the talented and gorgeous local Becca Hess, and the amazing Zerbin Band (I've never seen them before, and I was quite impressed!). 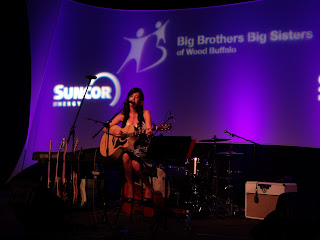 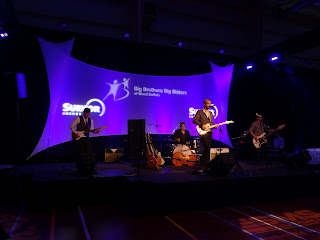 There was the "Tasting Room", where you could buy tickets to sample unusual beverages - and where I found one of my favourite Fort Mac people, Ruth Francoeur, tending one of the bars. 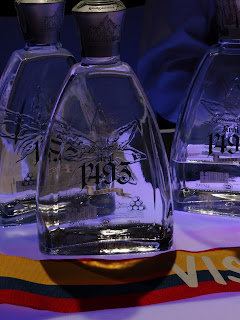 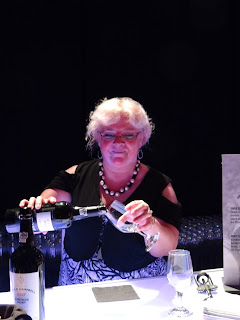 They are still tallying the totals for the live and silent auction, so I can't say exactly how much was raised. What I can say, though, is that this event was a TOTAL success. They created an ambience that rivalled the best cocktail bars in the country - in a field house. They paid attention to all the little details, provided wonderful entertainment, and gave the residents of this city a reason to don their fanciest clothing and raise a glass (literally!) to a terrific charity - Big Brothers Big Sisters.  It was an evening of wine and food, glittering glasses and chandeliers, elegance and charity - and community. It was a beautiful thing to witness, people, and I thank them for allowing this blogger to attend an event that is sure to become the annual "cannot miss" cocktail social of the season. Congratulations to the organizers, the staff, and the volunteers - you hit it right out of the field house, folks, and into the Fort McMurray stratosphere. 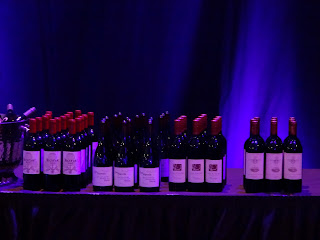 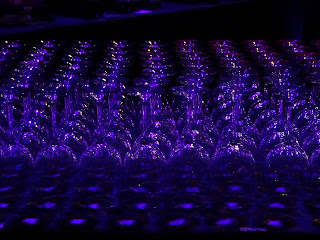 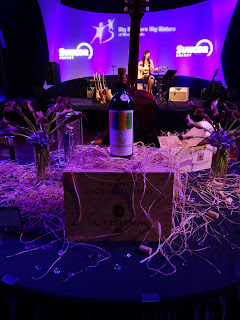