As I've noted before there is no shortage of fundraising galas and banquets in our community. It seems the gala and banquet season is in full swing in Fort Mac, and every year there are the usual events - Keyano Gala, Festival of Trees, and the like. One that I hadn't really heard much about is one I attended just last night - and people, I'm still a bit overwhelmed by the experience. The charity it raises money for has been around for 14 years, but as I commented to someone last night it might just be the best kept secret charitable organization in town - Kids Forever.

Kids Forever started 14 years ago, founded by local resident John Foy. The group had very modest beginnings, too, starting operations in the basement of John's house. The first banquet 14 years ago apparently attracted 35 people. Last night the Sawridge saw over 700 enthusiastic, engaged, and involved attendees. The growth over those 14 years has been exponential, and for good reason - Kids Forever is a charity of the very best kind.

John founded the charity to assist families with children that were experiencing a medical crisis. This could mean a child diagnosed with cancer, or one born with a disability. It could mean an infant or a teenager. It was designed to help with all those costs that our provincial medical plan doesn't cover - travel expenses, hotels, and meals. It was designed to help families to mitigate the devastation that a serious medical diagnosis creates. The founder felt that these families had enough to contend with in the emotional sense, and shouldn't have to deal with all the financial worries as well. So, he founded Kids Forever - and in 14 years Kids Forever has helped 164 families.

One of the first things I noticed at the banquet last night was all the men in red shirts. They were selling tickets, showing people where their tables were located, and just generally running the show. What impressed me most, though, was that the founder of the charity was not wearing a suit and schmoozing with the crowd. No, he was there in a red shirt, toiling away just like all the others. This was my first inkling that there was a humility and sincerity here that was genuine. People have different motivations for philanthropy. Some do it because it raises their public image, and some do it for adulation. Some, though, just do it because in their hearts they believe it is the right thing to do - and it's pretty clear that the Kids Forever gang fall into this last category, the category I reserve for true community heroes.

I noticed several other things at the banquet, too. The crowd ranged in age from elderly to very small children. They were dressed in everything from ballgowns to jeans. There were lawyers and realtors, welders and labourers. This was a wide cross-section of our community, not one specific group. There was something very interesting going on here, and I could tell that almost instantly. It wasn't until the presentations began that I realized how interesting, though - or how very profound.

The program brochure for the evening showcased the twelve children that Kids Forever helped in 2011. What I learned, though, is that usually these families don't go seeking Kids Forever. Instead Kids Forever somehow finds them, through the local grapevine. They hear about a family in distress and they show up, asking how they can help. I find that not only astonishing but amazing. It's like that true sense of old-style communities, where a family would experience a crisis and neighbours would suddenly appear with casseroles and start doing the dishes. Kids Forever has that feel to it, a sense of that community that doesn't need to be sought out or chased after - they are the neighbours who come to you.

The stories of the twelve children in the brochure tore at my heart. Even more compelling was the story told to us last night by a young woman who has been battling cancer for the last 14 months. She is an incredible young woman, someone who despite her medical crisis managed to graduate from high school this year with a 90% average. This despite 14 months in and out of hospital, despite treatments and surgeries that are reflected in her "journey beads" (beads that are collected and strung, each bead representing a treatment, needle poke, lab test, or surgery). The length of her journey beads? Over 10 feet, people. I gasped a bit when she revealed that, and I cried when I realized what this young woman, so much younger than me, has already had to face in her life. Her courage in both her journey and her ability to tell us her own story was profound and beautiful, and she spoke of her gratitude to Kids Forever for all they had done for her, from helping her family with general costs to helping with the costs for wigs to cover that precious, beautiful head of hers.

I battled tears the entire time she spoke, and found what she said deep and profound, and a true depiction of the people that are helped by Kids Forever. I dried my tears, and then it was time for the live auction. Ross Jacobs, local auctioneer and crazy guy, burnt up the floor. He cajoled and teased, he created rivalries and joked. Best line of the night? When someone was hesitant about upping their bid to $4600 and Ross said "You can find that in your couch, sir, this is Fort McMurray!". I nearly died laughing at that - and the bid, of course, was increased. The live auction raised over $77,000, and there is no doubt in my mind that the auctioneer was a significant component of that success.

The roller coaster ride wasn't over though. After the live auction there were more presentations, and then a young couple came up to take the floor. When they began to tell their story, the young woman serving as the orator, I knew tears would come swiftly and hard. You see, they had been expecting a baby, and during an ultrasound an abnormality had been found. Further testing revealed the severity of the abnormality, and words like "incompatible with life" had been said to them. Just listening to their story devastated me, as when I was pregnant with my daughter I too had an ultrasound that showed troubling images. I too went for further testing, and I recall so well my terror and pain and just plain fear. In my case, though, the extra testing showed all the worry was for nothing, and my daughter was born healthy and sound. I so wish this had been the case for the young couple last night, but sadly this was not to be. They instead endured the tragedy of a baby born with such severe issues that he lived for only 2 hours and 49 minutes. I imagine those were likely the best, and the worst, 2 hours and 49 minutes of their lives. As the young woman shared her story I wept when I realized how it could have been me, and it could have been my child. When she finished her story I glanced around the room and saw everyone wiping their eyes, not just the women but the men, too. I think we all had the same sense. It could have been any one of us, too.

People, there was so much more, so many moments of tears and laughter. There were cheques presented to hospitals, and there were families grieving the loss of beloved children. Through it all, though, shone the dedication, commitment, and generousity of this quiet little charity. I'd tried to do research on Kids Forever before the banquet, and found very little. Many people told me of how much they raised every year, and all the good work they did, but they seemed to do it so quietly and so gently that it escaped the notice of many in our community. When I mentioned this to both John and Brian Hatfield (a long time member of the group and one who has had a significant impact on it) they had very similar responses - they didn't try to attract a lot of attention. They didn't go out of their way to court the big corporations or companies. In the same way that they find those in need it seems the local businesses seek out Kids Forever, like the tire company that came to them yesterday with four tires and rims and donated them completely free of charge for the silent auction. The tire company had just heard about the event, and wanted to help out. And there, people, is the true beauty of Kids Forever. It is that old-style sense of neighbours, that sense of community - and that humility and dignity.

I could go on and on about the banquet, about Kids Forever, about the children and families it helps, and about my feelings regarding the experience. Instead, though, I will tell you this. There are moments in your life when you witness something amazing, when something catches your heart and you know it will never let it go. That happened to me last night when I fell completely in love with a humble, dignified, compassionate group of men in red shirts. That happened last night when I saw a community open not just their wallets but their hearts. That happened when I heard stories of pain and grief and suffering - and survival. That happened when I looked around a room of 700 people and saw not strangers but neighbours. That happened when I drove home in my car and alternately laughed a bit at Ross Jacobs and then shed a tear when I thought of the courage I'd seen. That happened when I learned about a humble little local charity that began in a basement 14 years ago, but that has become an incredible example of what people can do when they care, what they can do when they do what they think is right, and, what they can do when they do what needs to be done. That happened, people, when I discovered Kids Forever. They captured my heart last night, and they have it forever. 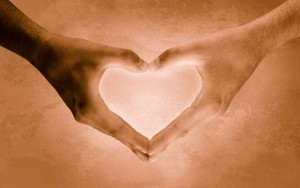