Generally speaking I am a pretty upbeat person. A benefit-of-the-doubt, understanding sort who tries very hard to see the bright side, to be positive, and to cheer on all that is good about this place I call home. There is one dark area I have avoided a bit because nothing nice can be said about it. It's a secret shame we carry here, although it is hardly a hidden one since the examples are right in front of us, and often photographed for posterity. This shame, this blot on all of us? Parking jobs from hell, people.

Look, I grew up in a city. I spent most of my twenties in one of the largest cities in Canada. And this is the only place where I have ever seen parking as atrocious as this, aside from Ireland (where we once came upon a parked car left in the middle of a busy street, and our Irish friend drily commented that many Irish seem to think of all roads as a sort of impromptu parking lot should they need to leave their car). Here in Fort Mac though we take parking to new heights - or lows, perhaps.

Last week I put out the call on Twitter - share your horrible parking photos with me, and I would publish them. I don't do this to embarrass anyone but rather to point out that we need some work on this little thing we call parking. Now maybe it doesn't seem like a big deal and rather a minor annoyance, but it isn't usually the big deals that lead to stress and anger and confusion and aggression. No, it's typically the small deals that do that, small deals like parking gone terribly, terribly wrong. Here's some examples.... 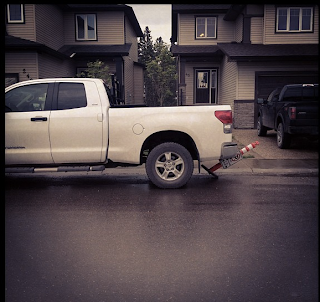 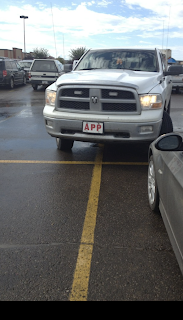 This gem came from Larissa 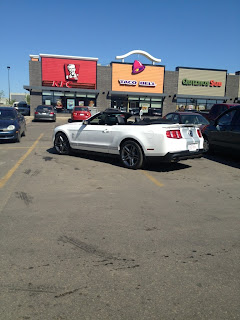 This is from Erin. I mean really?!? 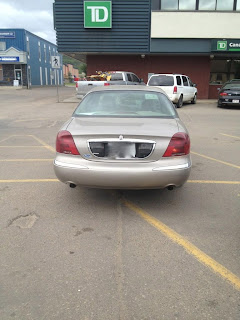 Now maybe when the parking lots are covered in snow there is some reason for not knowing where the lines are, but in the above photos everybody can clearly see the lines, including the drivers. And while there are those who park across several lines so "nobody can damage their car" I have this advice - leave your "precious" at home Golum if you can't risk it being damaged. Nobody wants their car damaged, just like I didn't want the bumper ripped off my car in the Peter Pond mall parking lot two years ago (a truck had pulled in a bit too close in the spot beside me, and when leaving their running board had snagged my bumper - some commented how nice it was of the driver to "stick around" and my reply has always been that they didn't have much choice as they would have been dragging my entire bumper down Franklin). If your car is too precious to be damaged then you probably shouldn't take the risk of driving it, and if you do then you should realize that the rest of us shouldn't be inconvenienced by your decision to chance it. One parking spot per person, people, is it REALLY that hard? 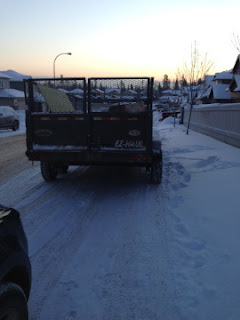 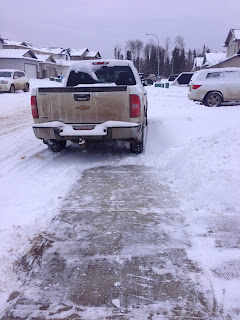 This one is from Kelly.
Um, buddy, you can see the sidewalk, right? 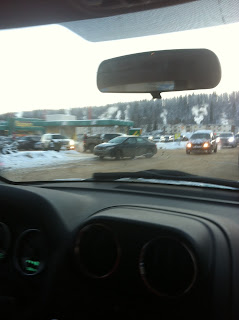 Matt captured this, and I am glad he did.
I saw this on Boxing Day as well.
This car wasn't "parked" so much as "abandoned".
And it backed up traffic leaving the mall and
Superstore, too. Argh. 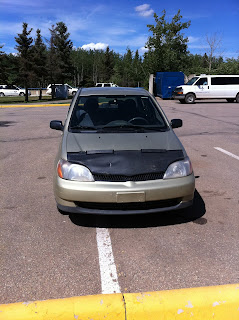 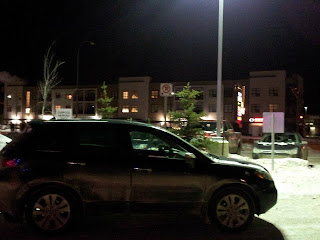 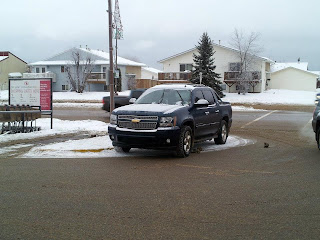 The trio above are courtesy of YMM Podcast.
The problems are obvious.

I must admit though that this blog post was inspired by a scene I stumbled upon at the Peter Pond Mall a few weeks ago. I was walking out of the mall and this stopped me. Dumbfounded I stared at the total lunacy. And while I try to avoid profanity in the blog I must share what I was thinking:

What the eff is wrong with you people? 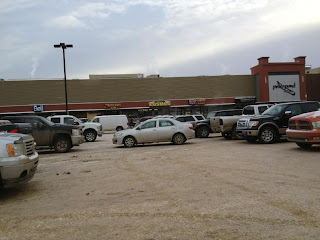 And you know it's not just the guy who abandoned his car in the middle of the lane. It's the other ones who boxed him in that are a problem, and if you look carefully almost every vehicle in the photo is parked haphazardly. Frankly when my nephew was 4 he did a better job with his Matchbox cars and trucks than this. And I wish I could say that seeing cars parked three deep at the mall is unusual but it's not. I always wonder what the hell the third one that pulled in was thinking - did they not even try to think it through logically?

And I guess that's my point. There is a serious lack of logical thinking and common sense going on. This sort of thing inspires anger. This is the sort of thing that simply makes living here seem like an overcrowded lab rat experiment in social rage. I do recognize that we have a parking shortage, but that means we need to engage our brains and park smarter, not simply abandon all the rules (and our cars) wherever we feel like doing so.

I've been laughing and crying over these photos for two days. And I know there are hundreds more, so if you have a photo of atrocious parking? Send it to me at McMurray Musings, and I will post them in an upcoming blog. I think it's time to take back our streets - and our parking lots. And if necessary I will do it one bad parking photo at a time.