On occasion this blog brings me opportunities I simply don't expect, but that make me chuckle with delight when they happen. That occurred this past week when I got an email from one of the owners of the new and about-to-open Wood Buffalo Brewing Co. He suggested I might want to take a sneak peek preview of the new restaurant and pub they are about to launch, and I think it's fair to say I leapt at the chance. I've wanted to see inside that space in the Morrison Centre since they announced their intent to open up here, and after interviewing Socrates for this blog some weeks ago my interest, and curiousity, had simply skyrocketed.

Now, I also happened to mention on my Facebook page that I was going to take a little tour of the new brew pub, and in fairly short order Toddske from YMM Podcast asked if he could come along (well, he pleaded, really, and being a good sport of course I said yes). Actually I was delighted to have Toddske come along as he knows his beer, he is just as passionate about this community as I am, and frankly we have a helluva good time collaborating, so I knew he was the perfect partner for a little tour. We arrived at the new brew pub at the corner of Morrison and Franklin, and met Socrates, who then took us on a little jaunt into the world of a micro-brewery.

Now, the brew pub is still undergoing work to be ready for opening, but I can see they are approaching the final phase, and quickly. Everything is coming together nicely, from a bar that will be jaw-dropping (and I mean the actual bar, long and lean and unique in character and design) to some unusual walls. As I listened to Socrates talk I was again impressed on so many levels - by his passion for beer making, and for business. I was impressed by his plans for merchandise (oh, the T-shirts!) and the "growlers" of beer they will sell. 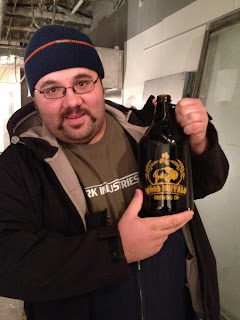 Toddske and his new BFF, Growler

Growler as defined by Wikipedia:

A growler is a glass or ceramic jug with a capacity of 0.5 US gallons (1,900 ml) used to transport draft beer in Australia, the United States and Canada. They are commonly sold at breweries and brewpubs as a means to sell take-out beer. The exploding growth of craft breweries and the growing popularity of home brewing has also led to an emerging market for the sale of collectible growlers.

There is far more to this brew pub than t-shirts and growlers, though. There is a focus on community, including inviting community members to name the new brews, brews made right here using local water. This focus is perhaps what delights me most about the new brew pub, because the intent isn't just to be a new business in the community. The intent is to be part OF the community, to both give to the community and have the community give to it, to become part of the fabric of who we are. And that alone delights me, but of course there is more. There is the beer.
I am thrilled to announce that Toddske and I got to sample two of the new brews that will be on tap. We got to tour the fermenting room, the kegging/cooling room, and we had the chance to sample the India Pale Ale and another ale that will be two of the Wood Buffalo Brewing Co. line up of beers. To say I was honoured is a huge understatement. I was so pleased to be asked to try them, and to give my opinion. And my opinion? They are stellar, people. This brewery is going to open up the entire beer scene in this city, and quite likely revolutionize it. The brews are still being brought to complete perfection but even in a slightly unfinished state, they are, in my mind, incredible. I cannot wait for when they open to try the finished products, and that is why I will be there on that day.
When will that be, you wonder? Socrates and gang are aiming for a mid-December opening, just before the holidays. I'm going to claim my regular table early, because I suspect this will become the place I take visitors, where I will bring people for casual interviews, and where I will choose to unwind. Most people know I have a regular coffee shop in town, and this brew pub is quite likely to become my "other home", the home where I can drink a Fort McMurray-brewed ale and be surrounded by friends.
So, people, I'm telling you this. When you get word that Wood Buffalo Brewing Co. is opening schedule it into your calendar and be there, because you will want a chance at the beer, the merchandise, and the growlers. You'll find me there as I intend to call a massive "tweetup" and invite the entire community, because this is one business where I wish to extend a very warm welcome to Fort McMurray. I want them to know that I am delighted to have them come and join our community, and I hope you will welcome them, too. And besides, how can anyone resist an ultimate Fort Mac in-joke t-shirt like this? I know I can't... 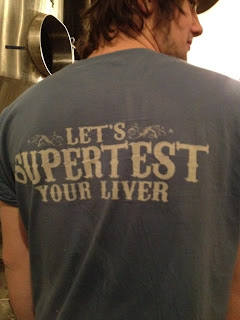 My thanks to
Wood Buffalo Brewing Co.
for the tour,
the beer tasting,
and for choosing
Fort McMurray
for your next brew pub -
and welcome to our community :)
at December 03, 2012