It's The End of the World As We Know It 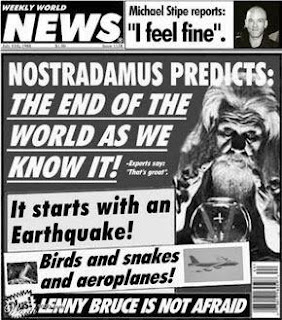 Tap tap - is this thing on? We're still here, right? No apocalypse, zombie or otherwise, occurred on Friday December 21st? Okay, okay, I'm being a wee bit facetious. The world, as we know it or otherwise, did not end on Friday, despite our dubious interpretation of Mayan calendars and our tendency to take ourselves entirely too seriously. All day Friday I had a certain song running through my head, and it was thanks to the Intrepid Junior Blogger. She posted a link to it on her Twitter (yeah, my kid is social media savvy, that's a stunner, eh?) and ever since it has been bouncing around my head. Why? Because while the world didn't end of Friday (and c'mon, who is going to admit NOW that they thought it might? Show of hands?), the world as we know it is ending - or at least changing, and we are right in the centre of it.

There are a lot of changes coming this way, folks. From the changes planned for within the region, like an expanded MacDonald Island Park, and a revitalized city centre, to the changes we may begin to feel from the outside - like concerns about our economic security in this province.

If you've been watching carefully recently there may be a bit of a chill wind blowing in our provincial economy. I've heard dark mutterings about the price of oil, and about the impact this would have on industry. And, of course, those murmurings will have a direct impact on this region and all those who work, live, and play here. I'd be fibbing if I said I wasn't concerned, but I have a strong belief in something about this place I call home. I believe in a certain quality we exhibit (and I don't mean our ability to engage in atrocious parking). I believe in our resilience.

This is a place that has faced adversity in the past. We are a resource-based economy - and community. Much about us rises and falls with the price of that resource. One thing stands alone, though, and is independent of the price of oil and the state of industry - our ability to overcome and to deal with hard times.

I find myself in the past few days reflecting about how a more challenging economy could affect this place, and all the plans. We are expanding in every way, neighbourhoods and airports and recreation centres and population. Should the economy falter these things may slow as well, and someone even asked me recently if I thought Fort Mac could become a ghost town in the future, once the "end of oil" had arrived, or if the economy tanked. It was a sobering question, and one I find myself mulling over, in the end always rejecting it as impossible. And the reason it is impossible is because of the people who live here.

We are a tough bunch, us northerners who deal with -35 temperatures and blustery winds and driving snow. We are a solid group, and most of us have seen tough times of one sort or another. There are those who believe the wolf is at the door again, and if it is we will deal with the wolf once more, beating it back until it retreats into the boreal forest. I am not sure if the wolf is there, or if we will face tough times in this region. I do know that if we do we will face them together, as we have done in the past, and we will simply keep on keeping on.

In the end, whatever happens - the economy soars, or the economy tanks, the boom is on, or the bust begins, the wolf never arrives, or the wolf is creeping into our door - we have no choice but to simply deal with it. What is the alternative, really?

I realize this isn't exactly a cheery "Merry Christmas" post, and I promise one of those tomorrow. For this one you could blame my kid for posting a song that got me thinking about this stuff, or blame REM for the song. Or blame the Mayans, since frankly they seem to be on the receiving end of a lot of blame recently - and given our apparent survival on Friday rather undeservedly so. For me, though, I don't blame anyone. The world didn't end Friday, and it won't end if the this place goes crazy with rapid population growth and a booming economy, and it won't end if the economy gets weak and things slow down. The world will keep right on going, and we will keep right on going, too. In the end, that's just what we do 'round here. There is always an outside chance it could be the end of the world as we know it - in which case we will just adjust to a brave new world instead. And you know what? I feel fine.