Riding the Santa Bus With Country 93.3 - and Community

I guess it all began when I met Santa. It's kind of a complicated story, but when your hairdresser (who you dearly love and who is responsible for saving you from hair chaos) phones you to mention she is curling Santa's wig and beard you take notice. And then you arrange to be there with a camera, because that is one story just too good to miss. That's how I ended up in Ellen's home-based salon chatting with a lovely man who plays Santa for the Diversified children's Christmas party. That's how I heard about his investment in a custom Santa suit and beard and wig (real human hair that requires maintenance - and curling). And that's how I heard about his stint driving the Country 93.3 Santa Bus.

It was an intriguing idea. Country 93.3 partners with Diversified, and Santa drives the bus so local contest winners can be chauffeured around Fort McMurray to see the Christmas light displays in various neighbourhoods. After Santa explained it all to me I sent a message to Jerry Neville, morning show host at Country 93.3 and my buddy (several months ago Jerry finally convinced me to a radio bit with him every two weeks, and while I resisted the idea initially it is now one of the most fun things I do). I asked Jerry if he was involved in this Santa Bus thing, and when he replied he not only said yes, but he asked if I wanted to come along. That is the sort of question that always prompts me to respond with things like: "Do bears poop in the woods? Does Santa slide down chimneys? Do radio hosts like donuts and coffee?!? Hell yes!" - which is how last night I found myself at Tim Horton's downtown with about 50 parents, grandparents, children, infants, Country 93.3 people, and Santa. 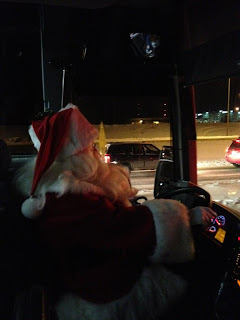 Sitting at Tim's prior to the bus ride Jerry and I talked about life here in Fort Mac, and then folks started arriving. These are people who are regular listeners to Country 93.3, fans of Jerry, and it was wonderful to see them give Jerry the appreciation due to him (Jerry and his wife haven't been here in town for long, but they have embraced this community with open arms). I mingled with people too, feeling a bit out of place because I am not a "radio person" for the most part, but I chatted with the adults, and I talked to the kids, because frankly I love kids and their honesty and charm (and last night one little girl, with blonde hair and glasses and a lovely grin reminded me very much of a certain Intrepid Junior Blogger at that age - bright beyond her years). When it was time to board the bus out we trooped to the Diversified bus waiting at the corner of Hardin Street and there, in the driver's seat, was Santa.

It took a bit to get on the bus because every kid stopped dead when they got their first glimpse of Santa. The kids, who had been so very excited before the bus ride, were now all a bit amazed to actually see the good old man himself, resplendent in his red and white suit (and beautifully coiffed hair and wig, too). Once we managed to get on the bus and they had all found seats Jerry asked if I would come up to the front of the bus with him, and so I did - which is how I found myself co-hosting the Santa Bus tour, something I never imagined would happen (I had thought I'd sit in the back and drink coffee and eat Timbits). Instead I found myself right up beside Jerry, microphone in hand, and off we went to tour the lights.

We headed first to Abasand, my old neighbourhood in fact, where most houses have mounted terrific seasonal displays. It was in Abasand where Jerry announced we were going to sing Christmas carols - and that would be when he handed me the mike so I could lead the bus in a rendition of Jingle Bells. I looked at Jerry aghast, because there are a few things I don't do. I don't swim, due to a fear of water, I don't downhill ski, due to an unfortunate encounter with a very large tree many years ago, and I don't sing in public, due to the likelihood of causing pain in the ears of all around. But once again I was incapable of saying no to Jerry, and so off I went, leading the carol, and finding myself delighted to hear every voice on that bus, even the tiniest ones, joining in. 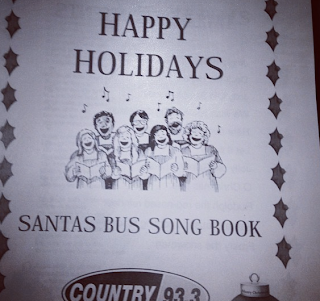 And so it went for the rest of the bus ride, through Gregoire and downtown and Thickwood. Carols were sung, contests were held, prizes were given out (including the windshield scrapers which I suspect some unsuspecting husbands will find in their Christmas stocking on December 25th as a subtle hint of what their wives would like as a gift - pre-scraped windows for the rest of the winter), and in general merriment occurred. 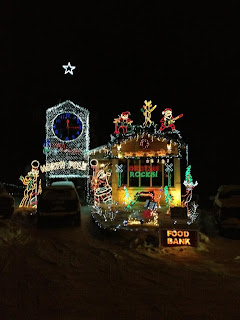 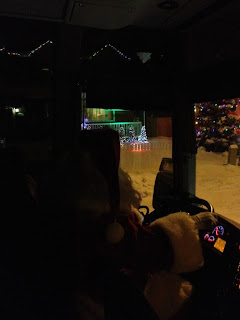 Jerry gave me the mike at several points, like at Inland where I spoke about their long history of lighting up their yard at this time of the year, and about how ever since we arrived in this community it has been one of the things my family has enjoyed. I spoke about the owners of a little house on Sifton Avenue, and how they mount a lights and music show for this month for no other reason than because they love the holidays, and because they love to share it with the community. Jerry kept up the lively banter (because he is the consummate radio professional) and the entire bus rang with laughter and chatter and carols and the sounds of Timbits being munched.

So many things delighted me that it is hard to write about only a few. Watching Santa drive down Highway 63 and watching the reactions of drivers when they glanced into the bus was truly a highlight, though. There was usually an initial look of bafflement, and then frantic waving as even middle-aged men driving transport trucks can't really resist Santa. Watching the kids snarfle down Timbits, hands and faces coated in chocolate, was another moment of joy (as was watching dads try to cover up any evidence of what the kids had been eating before taking the sugar-wired little ones home to mom). But it was listening to the people and seeing their faces that truly warmed my heart. It was hearing those tiny little voices singing, and talking, and interacting with them that made me smile. It was the adults smiling and laughing. It was the sense of Christmas in the air, and in their voices. It was the sense of community.

I write so much about community. It is the "c" word always on my lips, ready to leap into every conversation. It is what excites me, and makes me happy. It is something of which I am so very proud, and last night on the Santa Bus I saw it yet again, in a little group of everyday citizens of this place - this community. These were not politicians, and maybe not those one would think of as "community leaders" - and yet every single one of those people IS a community leader, because they call this place home, they raise their families here, and they embrace things like a Santa Bus run by a local radio station and a bus company. Maybe, just maybe, those folks are the real community leaders.

I go to a lot of events. I've attended many seasonal events this year, and hands-down the best time I have had was last night on the Santa Bus. Sitting beside Jerry and being able to share some of my story of life here, being able to meet new people I would likely have never otherwise met, being able to hear children tell me of their excitement over Santa, singing carols and watching Santa drive the bus and looking at lights? Well, this is one for the memory book indeed, and a time I will never forget. There was a moment when we were driving down Highway 63, singing a carol, Santa at the wheel, and me staring out the front window of the bus into the beautiful snow and ribbons of car lights when I thought "God, I love this place". And it's true. I do. I love Fort McMurray - but even more I love people like Santa and Jerry and the folks at Diversified and Country 93.3 and all those people on the bus, because they are what make this place - this community - a place easy to love.


My huge thanks to
Jerry Neville and Country 93.3
for inviting me onto the bus
and allowing me to co-host,
to Diversified
for being a part of the Santa Bus tour,
to Santa
just for being who he is
(and he is amazing, trust me),
and to all those who rode the bus with me
because they truly reminded me
of what I love about this community -
the people. 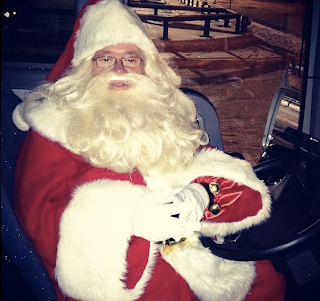