Not Just An Ad Campaign: Big Spirit in Fort McMurray 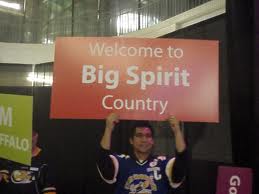 It's a phrase you hear mentioned a lot in Fort McMurray. It is one, in fact, that people have complained to me about, saying it is over-used, become a cliche, and really just a marketing ploy. It is the phrase "big spirit".

Now, let's be honest, and admit that the phrase was likely dreamed up by someone in marketing and communications somewhere, because it is intrinsically linked to our municipal government, with things like the Big Spirit Magazine they publish, and the accompanying website. It is, I suppose, originally an advertising campaign of sorts, a way to promote this region and community in the greater world, and to build community spirit right here. But big spirit is far from being just an ad campaign, because "big spirit" describes this place better than almost any other phrase I've ever heard.

I could talk here about the philanthropy exhibited by the big corporations, like the Syncrude Food Bank Drive, or all the other initiatives that industry engages in to raise money or goods for local non-profit organizations. While those things are terrific I think instead I'd like to talk about the individual, and about that big spirit.

So let's start with the Food Bank Drive. I was stunned to discover that effort requires the participation of 600 volunteers. 600?!? That's a huge number of volunteers, and yet every year they manage to find enough volunteers to man those trucks collecting donations outside grocery stores. That isn't an effort from industry, though - that's 600 individuals giving of their precious time to contribute. 600 is a big number - and a tremendous display of big spirit.

But let's talk about smaller numbers. How about the people who pay for the person behind them in the Tim Horton's line-up? I hear about this fairly frequently, how someone will drive up to the window and discover their order has been paid for by a mysterious stranger ahead of them. Some will call it a "random act of kindness" - I call it big spirit.

How about the individuals who drop in cash every time they see someone collecting for anything? SPCA, Salvation Army, whatever it is, they have a $5 bill that gets dropped in. That's generousity, that's philanthropy, and that is big spirit, too.

But it isn't always about cash or coffee. I'd like to share some personal stories. Two weeks ago I was horribly ill with the stomach virus that has been going around the city. I'll spare you the gory (and ghastly) details but I was as sick as I've been in decades. That weekend it also decided to snow, and suddenly my driveway and sidewalks were virtually impassable due to a thick, heavy blanket of snow. I was just too weak to shovel, and even when I had mostly recovered I couldn't face the thought of trying to clear it. I had to go out briefly one night, and I left feeling disheartened knowing that when I came home I really needed to deal with that snow.

I arrived home, walked around the corner, and found...a freshly snow-blowed driveway, completely cleared of snow. I have no idea who did it, none at all, although I suspect it was one of my neighbours. I almost cried when I realized it had been done for me, and I felt such profound gratitude. I felt this even more when I learned that someone else, who had heard my lament about the snow on Twitter, had come by my house to clean my driveway, but finding it done had gone and done some other random driveways instead. That isn't just a random act of kindness. That is big spirit.

And the funny thing about big spirit is that when you have been the beneficiary of it you are inspired to pay it forward. This past Monday I was downtown and had stopped for a coffee. It was such a cold day, and on days like that my thoughts always turn to my friends at the Centre of Hope. I worry about the patrons being exposed to such harsh temperatures. I thought about what I would want to cheer me up on a cold, bleak day, and being someone with a weakness for baked goods I quickly realized it was donuts. And so I purchased four dozen donuts and dropped them off to the Centre of Hope (and was met with such profound gratitude from the patrons there that once again I was almost moved to tears). It was such a simple act, really, and yet it felt so very, very good to do.

Last night I was headed downtown again, this time listening to Mix 103.7. Morning radio hosts Ashley and Sean had been broadcasting all day from the HUB (and oddly enough from inside a little playhouse set up inside the HUB). They were collecting for the Telus Christmas Critter Care Campaign, raising funds and goods for the Fort McMurray Family Crisis Society, Victims Services, and the HUB. While I was listening Sean issued a challenge. He commented about how many people "talk the talk" of Big Spirit, but that this was time to put the walk into the talk. I immediately pulled over and looked in my purse to see how much cash I had. It wasn't a huge amount, but it was some. I thought about what I would do with it - coffees, a meal out, new shoes, a new dress - and then I drove straight to the HUB, walked in, and handed it all to Sean and Ashley. With a smile I said to them "Big Spirit isn't just an advertising campaign", wished them a Merry Christmas, and then drove away.

You see, I firmly believe that big spirit might have started as a marketing slogan or an advertising campaign, but it has become so much more. It is the one phrase that has truly captured the nature of this place, where people always rise to the occasion and meet the needs of others, whether it is cleaning a driveway or volunteering their time or donating to a cause. Big spirit isn't just what we display or what we do. We are the home of "big" - big trucks, big projects, big plans, big dreams, and big spirits. There are those who may be cynical about the slogan. There are those who may doubt it, and those who think it is nothing more than a marketing tactic. I am not one of those. I am someone who chooses to believe in our big spirit, and who chooses to participate in it whenever I can, whether it is with donuts or cash or volunteering my time. You see, big spirit isn't in industry or government. It resides in each and every one of us in this community, and only we can choose to share it. Big spirit is not just an advertising campaign. Under this big northern sky, surrounded by big boreal forest, big spirit is just who we are. 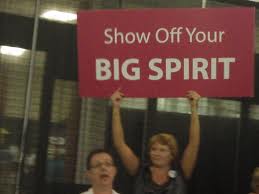