Fort McMurray Is Idle - and Apathetic - No More

To be honest I only went to the Peter Pond Mall yesterday to indulge in some boxing day shopping. I went alone, as the Intrepid Junior Blogger was into day three of pyjamas, Twitter, and X-box, and she didn't want to break a successful streak. I decided to brave the crowds (and worse, the parking lot) in search of some bargains as I am admittedly a bit passionate about more than this community and writing, and often find myself falling in love with a new pair of shoes or dress. I went to the mall with no purpose other than to support our retail economy, but I came away with far more than some new clothing and a new handbag. I came away with some optimism about the future and nature of this place, and our world.

You've probably heard about Idle No More, the movement that has sprung up across this country. It has been painted as being in reaction to the federal government's passage of Bill C-45, an omnibus bill with some worrying content, but I think it has developed in reaction to so much more. And while some have seen it as a "native rights" issue I think it is far more than that, too. I will admit I did not know much about it before yesterday - I had seen footage of some other events associated with it, I had followed the news of Chief Theresa Spence's hunger strike (she has a lovely first name, don't you think?), and I knew there had been a blockade on the highway north of Fort McMurray. But other than that I knew very little, and I'm ashamed to admit that. I know shockingly little of the issues facing the First Nations and Métis people, and it really is a bit sad to admit that because they are pretty fundamental to the fabric of this country, and this region. I know a bit from growing up in Saskatoon, and from working in Northwestern Ontario for a regional airline, one that flew into the reserves there, and so I had a glimpse of that life on occasion. But I know far less than I should, and I acknowledge it. I have no excuse except I've just never known where to begin, although in recent months I have taken steps to remedy that.

Last year the Intrepid Junior Blogger was studying the aboriginal people of Canada in school. She was preparing for a test, and commented that the multiple choice tests in this subject were easy. When I asked why she responded (uncoached and unprompted, which should tell you something) that if asked a question about the treatment of aboriginal people and given four choices the correct answer was always the worst possible outcome. As she said "if there was a crappy end of the stick that is always the one they were handed". Sobering truth from an eleven year old, and wise beyond her years, I think, too.

So what does all this have to do with the Peter Pond Mall on Boxing Day? Not much, I thought - until I arrived at the mall and found it packed. Now, I expected it to be busy, but it was jam-packed. As I looked around I noticed something else, too. Many of the faces were ones I recognized from our First Nations communities around this region. The faces were old and young, male and female. I walked past them and it wasn't until I had gone up the escalator to the second level and looked down and saw the drummers that I realized. I had stumbled onto the local Idle No More round dance. 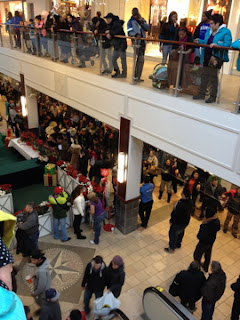 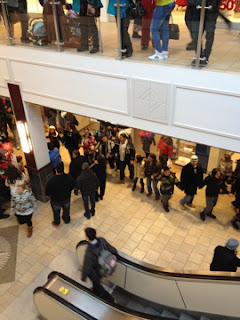 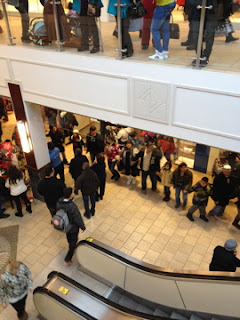 The drumming began almost immediately and I flew back down the escalator, as fast as my impractical black heeled boots could carry me. I grabbed my phone as I had not known to bring a camera, and began snapping photos as people around me linked arms and began to dance. The drumming was beautiful, resounding through the mall, and the aisles were a moving mass of people drawn to the rhythm of the drums. 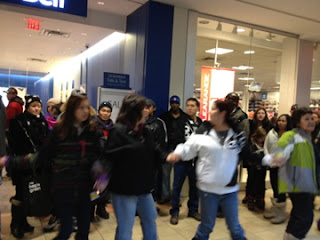 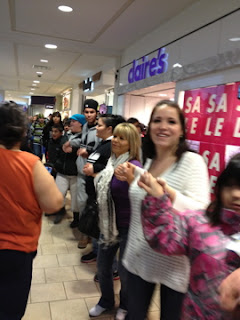 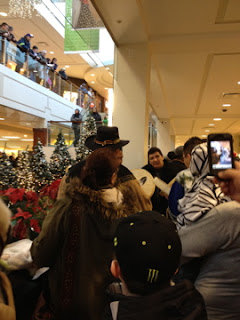 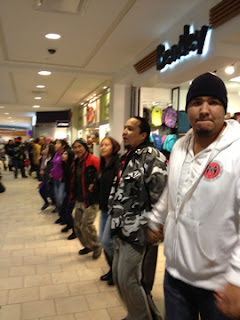 I stood transfixed in the middle of it all, and I think the word "wonderful" escaped my lips more than once. I felt honoured to be there, to have simply discovered it, and I was humbled by it, too. You see it made me realize how little I knew, and how much I needed to learn. 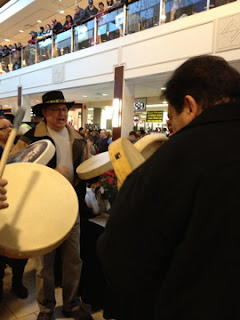 This is a place often accused of apathy. Our voter turnout is worse than abysmal, and sometimes it seems we care little about the issues that affect this world. And in turn I have heard the same charges levelled against First Nations communities, that of apathy and lack of concern - but what I saw yesterday was the complete opposite of that. What I saw was energy and passion and commitment. I saw deep, deep caring about this world, and about what affects not just their community, but ours. You see Bill C-45 has some components, things about removing the environmental protections from dozens of waterways, that will impact us all. This isn't an aboriginal issue - this is a Canadian issue. And the drive to address it, to fight it, is being led by the aboriginal people of this country, the ones too often accused of apathy. They are the ones who have chosen to take this on, and they have my deep respect for doing so.

I think we should be clear on a few things. The aboriginal people of this country form a significant portion of our population, and they have the potential to be a powerful political demographic. They can, and do, influence the outcome of elections, and affect the political process - so the Idle No More movement is one you ignore at your own peril. I think we should also be clear that I do not believe our current federal representative in this region is truly reflecting the needs and desires of at least some of his constituents, as Brian Jean supported Bill C-45 despite the concerns of it's impact on local First Nations peoples - and on all of us. And I should be clear on something else, too - this is far from a simple issue, and I freely acknowledge that, which is why I hope to learn much, much more, because I think there is something very important happening here.

And in the end that is truly what matters to me. While Idle No More is a national movement it is also happening right here, in Fort McMurray. I care about this region, and the people in it, and if this movement has struck a chord with them, and one so deep that they round dance in the local shopping mall on Boxing Day, then you damn well know I am going to pay attention to it. I believe in political activism, and even more than that I believe in passion and drive to effect change in our world. What I saw yesterday might have been some drummers and a round dance, but it was, I think, the tip of the iceberg in terms of potential to change things dramatically in this region, and this country. I saw political activism, and I saw passion, and vision, and drive - and those four things combined hold a power than can topple governments, and change the destiny of a nation. 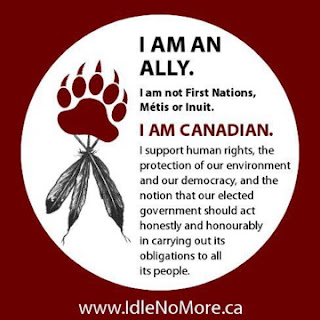