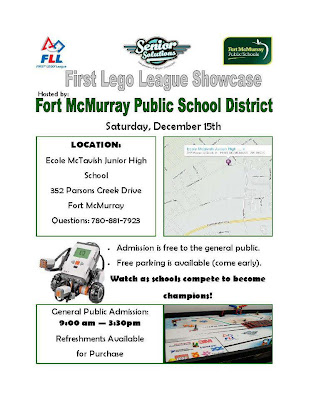 There are many things I do specifically for this blog, and then there are things that cross over from my personal life and into this blog. Often these things involve the Intrepid Junior Blogger and activities she is involved in, and so it happened this past weekend when I spent a day at École McTavish for the Fort McMurray Public School District First Lego League Robotics Showcase.

For the past several weeks the IJB has been putting in a lot of extra time at school. She had a role as one of the orphans in the school's recent production of Annie, and she has been a part of the school robotics team. Between those two activities she has been spending hours of her off-school time at the school, in rehearsals for the musical and meetings for robotics. This past weekend both activities culminated in a sense, with the final performance of Annie on Friday night, and then on Saturday for the robotics competition.

The robotics league is very active in the FMPSD. Several of the elementary schools fielded teams for the showcase yesterday, and McTavish actually had three teams of students participating. The teams all build the robots using the Lego Mindstorm robotics kits, and then the robots are put to the test by performing tasks in a time-monitored contest. The robots, which are programmable, put the students to the test, too, requiring them to use both design skills and logic to create robots that are able to accomplish the tasks required of them. 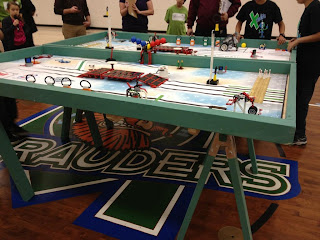 One of the most interesting aspects is the team judging, where the students must present the robots to the judges and explain the operation of the robot, as well as demonstrate some of the programs. They do this on their own, without the presence of coaches or parents, meaning they must exhibit an understanding of the robot and programming.

Now, to be honest the IJB has a bit of an advantage in all this. Several years ago for Christmas her father, an engineer, bought her the Lego Mindstorm kit, and she built robots, and programmed them. And she built some very interesting robots, including the one that I discovered when I entered her room one day when she was at school. I walked into her room and realized that something was shooting small plastic balls at my ankles. Her robot, armed with a motion sensor, had detected me entering her room and launched an attack (being me I of course re-armed it and then sent the dog in, as I was not willing to be the only one surprised by a sudden avalanche of plastic balls).

The IJB and her team had been hard at work on their robot, but she was concerned about some disturbing traits it was exhibiting, including a tendency to spin in circles on occasion. Despite these concerns she and her team were at McTavish bright and early to compete against the other teams.

It's very interesting to watch the competition, and to see the excitement of the kids involved. It is clear that these kids share a passion for design and engineering, and for innovation. Most of the robots performed well, and the teams expressed enthusiasm with cheering and chanting. Over the course of the day each team competed three times, and met with the team judges to explain the intricacies of their robot. And, at the end of the day, while the judges compiled the results, MC and Thickwood principal Kevin Bergen entertained the crowd with an impromptu dance party, which delighted the kids (and included a gangnam-style dance off which may have involved the participation of a certain parent/blogger who would do anything for her kid).

When the results were announced there were prizes for strategy and design, and many other aspects of robotics. Each team got certificates and a chance for a team photograph, and then the winners of the day were announced. I wish I could have captured the face of the IJB when the name "École McTavish Xcentric" was read for the first place winner. You see, that was her team, and they had achieved top place in a rather fierce little competition. To say she was delighted is a complete understatement. 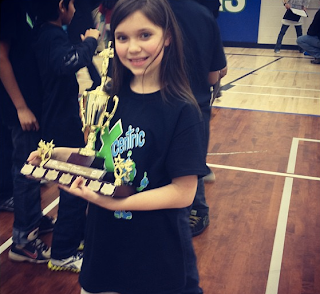 What's up next for the IJB, her team, and some of the other robotics competitors? A provincial competition in January in Edmonton, where they will have the chance to see their robot compete against those from schools all across the province. Last year McTavish did very well at this competition, and this year promises to be another good year for the students. Regardless of the outcome of the provincial competition, though, I think the students will all be winners for what this activity teaches them.

And what does it teach them? Robotics, of course, both design and programming. It builds problem solving skills, and it encourages innovation. And perhaps most importantly it teaches the fundamentals of team work, with the students having to work together to achieve results, and needing to use skills in communication and cooperation to accomplish a task.

I spent all day yesterday at McTavish, hanging out with the IJB and her friends, chatting with parents and judges, and just generally enjoying the dual role of blogger and parent. It was absolutely wonderful to see the IJB's team do so well, but I would have been proud regardless, because I know the level of effort and work the students put in, and so all involved should be proud no matter how they did. And I am proud too, of a school and school district that encourages students to explore so many different facets of life, from performances of the musical Annie to Lego robotics. I feel fortunate that the IJB has been a student in the FMPSD since Kindergarten, and that she has been able to participate in so many incredible activities as a result.

Today the IJB is exhausted after so many weeks of rehearsals and robotics sessions, and I admit I am rather tired, too. I think, though, that she is very satisfied with the results of her hard work, as am I. She was pretty proud to hold that first place trophy, but I think she was even more proud to hold their robot. And, at the end of the day, I was just pretty damn proud to hold her, too.