So, it's taken me a while to write this blog post, but it's not because I didn't want to. It's more because life has this way of interfering with the fun stuff, like this blog. In the vein of "better late than never" though, I decided to write about my trip to Edmonton in November, or, as I like to call it, the Edmonton  Escapade, Revisited.

My original Edmonton Escapade was courtesy of the good folks at the Edmonton Economic Development Corporation. They were kind enough to pay for my travel expenses, but this time my escapade was self-funded, and I went for a few reasons. The main one was just to get away and spend a few days in Edmonton, as I am very fond of that city, and the residents. I had some meetings lined up, which I will discuss further on, and I had some plans (like eating and shopping). First, though, there was the matter of getting there, because while I didn't feel like driving I was reluctant to pay the plane fare, too - and that's where Red Arrow came to the rescue.

Red Arrow is one of those companies that has embraced Twitter, and are active in the medium. I tweeted about my plans to head down to Edmonton and almost immediately I was contacted by them through Twitter, offering me a complimentary bus trip down the 63 and right into the heart of Edmonton. Now, I've travelled with Red Arrow before, and I like them for a few reasons: comfortable seats, free wifi, outlets to charge my myriad devices, free beverages, and cookies. Yes, cookies. It doesn't take a rocket scientist to say yes to an offer like that, and so I gratefully accepted and plans were underway.

Then there was the matter of where to stay. I immediately headed to the website for my preferred Edmonton hotel, Union Bank Inn, but when I plugged in my travel dates was saddened to see they appeared to be full. It was Twitter to the rescue again, though, as I contacted them via direct messaging and asked about those dates - and voila! A reservation was quickly secured, and I had transportation and accommodation lined up and ready to go.

And that's how I found myself on a bus headed down Highway 63 bright and early the Sunday morning after Keyano Gala (being very glad I hadn't overindulged the night before). I'll be honest - I love to travel, and I rather like the bus since I am strapped down for a few hours and forced to focus (which can be a challenge for me on occasion). I got more writing done on that bus ride than I normally do in three days, knocking off article after article as I merrily tore into stories. By the time I arrived in Edmonton I was feeling downright virtuous. 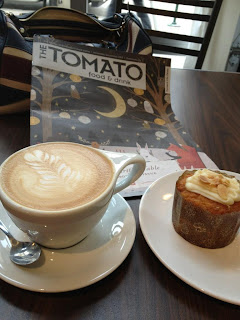 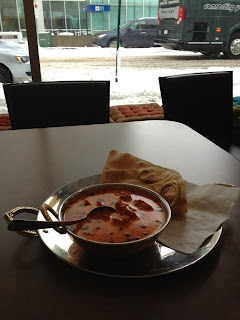 It was a rather nice day when I arrived, and so I decided to walk from the Red Arrow depot downtown to my hotel, a short jaunt past some of my favourite Edmonton destinations, like Transcend Coffee and Wener shoes. I checked into the Union Bank Inn, greeted as usual by their lovely staff, and the escapade truly began. 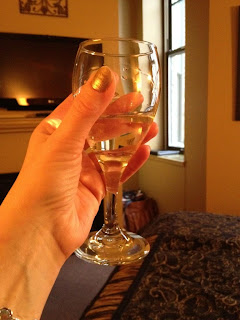 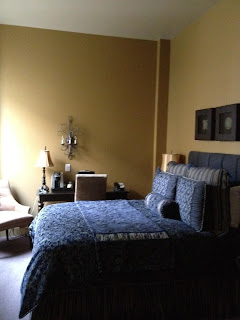 There are things I love about this hotel, and most revolve around the character and charm. The nightly glass of wine and cheese tray is especially wonderful, though, and I relaxed Sunday night with wine in my hotel room as the next day I was off to something a little more challenging - the Alberta Legislature.

Late Monday morning I arrived at the Legislature building, which is a beautiful place. I think every Albertan should visit it, at least once, to see a place that is so stuffed with history. But it isn't just history that happens here - this is the seat of governance in our province. This is where decisions are made that affect us all.

I stopped in to visit at a few offices and chat with some folks I know, and then it was time to head to the Chambers, because I had a special reason to be there that day. I went through security, giving up my purse and my cellphone (I resisted the last and was tempted to hide it on my body but alas being without pockets and wearing a dress I had few options for smuggling). I went and sat in the visitor galleries, watching as the formal traditions of government played out below me, and, then, when visitors were introduced, I was delighted to stand when MLA Don Scott introduced me to the house.

It was pretty amazing to be introduced to the legislative assembly. I felt a wee bit self conscious, waving to the assembled politicians below, and listening as my biography was read. It felt a bit surreal almost, but it was such an honour, too. After introductions ended I settled in to try to watch the proceedings, and I almost made it to the end, too, giving up at about 5 pm when I realized I was falling asleep in the visitor galleries, I was entirely alone as all other visitors had vacated long before, and I was freezing as they seem to keep the galleries at roughly the same temperature as the inside of my fridge. I snuck out, as I was famished, and I wanted a burger.

I put the call out on Twitter, and after several responses I decided to head to the West Edmonton Mall and Delux Burger Bar, where I feasted on a delicious burger and fries. I also feasted on some new shoes and dresses, satiating my appetite for both shopping and food, and then headed back to the hotel where I found the usual glass of wine. 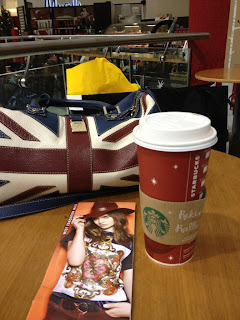 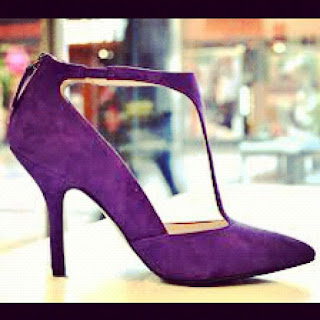 I'll admit it. The next two days were spent in a blur of shopping and coffee dates and eating and meetings. I spent a lot of time exploring downtown Edmonton, shopping malls and art stores and restaurants, fuelled by regular stops for coffee. I met with politicians, including two MLAs from the Wild Rose Party, to discuss all matters Fort McMurray, and I spent a lot of time drinking wine late into the night while working on various stories. I ate at places like Remedy Cafe (fan-freaking-tastic) and Blue Plate Diner (OMG, awesome food), and I quietly enjoyed my time until the day before I was to come home. Which is when the enormous snow storm struck.

I woke up the day before I was to leave to total white out conditions. Edmonton was blanketed in fresh snow, and it was still coming down. I watched out my hotel windows as traffic began to resemble bumper car amusement park rides, and then, coffee in hand, I grabbed a taxi to my final meeting at the Alberta Legislature. When that meeting was over I tried to call a taxi, and found only busy signals.

After 15 minutes of busy signals I decided to walk from Legislature downtown, and to say I had fun is an understatement. I walked past city transit buses that were entirely stuck, and past several fender-benders. I walked past people building impromptu snowmen, and found myself chatting to random people along the way as we all marvelled at the dumping of snow and the ensuing mayhem. I even found myself in the middle of a snowball fight when someone with bad aim beaned me in the head with an errant snowball, apologizing profusely but finding me in laughter instead of tears (and for the record of course I didn't toss a snowball at his departing back, catching him squarely in the centre of his shoulder blades, and then dashing away).

By the time I arrived downtown I looked like a snowman,  and I was in desperate need of a cupcake (and thanks to Flirt Cupcakes I found two, as the lovely lady behind the counter told me if I mentioned I had seen them in social media I could get two for the price of one, and indeed I had seen them there). Realizing that I wasn't anxious to head home the next day given the roads, I arrived back at my hotel, called the front desk, and asked if there was any chance to stay another night - was there room at the inn? 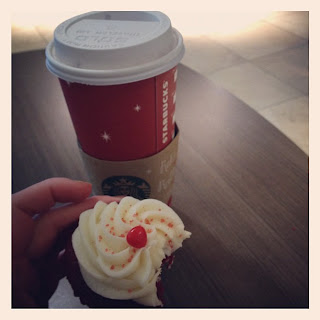 Indeed there was, although it meant switching rooms (which they did for me, moving all my things to the new room), and I was delighted to get the chance to see another room, too. I decided that although I had enjoyed the bus ride down with a delayed departure I would instead fly home, and so I booked a flight (surprisingly inexpensive on such short notice). And so I spent one last night in Edmonton, enjoying a city now under a lush white blanket of snowflakes. Despite the snow and cold I grabbed a taxi and headed straight to a movie theatre, where I caught the opening night of "Skyfall", and I settled into a seat to enjoy James Bond at his finest,  marvel at the Scottish countryside, and  drink in the beauty of my favourite city in the world, London. 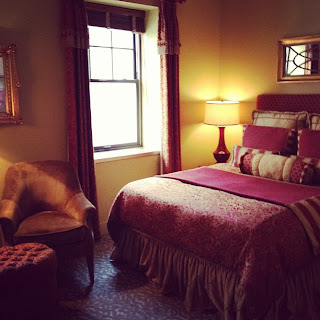 This escapade was a bit different from the one in the spring, and yet not so different, either. You see on every trip I discover things I fall in love with, and return to again and again. Last time I found Transcend Coffee and the Union Bank Inn, and those are now staples of my trips to our neighbour to the south. This time I found Remedy Cafe and The Blue Plate Diner, sure to be spots I visit again. I wandered the streets, I shopped, I ate, I talked, and I enjoyed a city of which I am very fond. I took note of things like their "I love Edmonton downtown" campaign, and wondered about similar such campaigns for the downtown of Fort McMurray when the revitalization is complete. 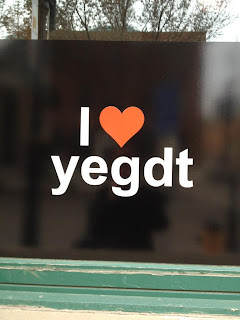 It was a wonderful trip, another Edmonton Escapade with food and new shoes and memories of being officially introduced in the Alberta Legislature. When it drew to a close, though, and when I boarded a plane to fly home? Well, I was happy as usual, because as much as I love Edmonton and my adventures there in the end, really, there is no place like home. And for me, that is right here, in Fort McMurray. 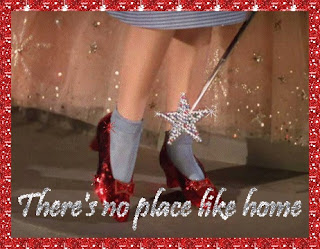