Tomorrow Is Always A Day Away - "Annie" at École McTavish

I now know the words to every song in the musical Annie. Oh, it's not because I've seen it on Broadway, as I haven't, and not because I've watched videos of countless productions, because I haven't done that, either. It's not even because I'm a huge Annie fan, as I'm not, although I've always thought it was a charming story. No, it's because for the last few weeks I have been listening and watching as the Intrepid Junior Blogger prepared for her performance in the production of Annie being mounted at École McTavish Junior High.

When she auditioned for Annie I was delighted, as the IJB is a rather dramatic creature, prone to fine little performances right here at home. I've always known she had a flair for the stage, and I wasn't surprised when she landed a fine role. She was pleased to get this role, too, although I think she had no idea of the amount of work that would go into making it happen. And work she has, rehearsals almost every day after school, and this past weekend, the last one pre-perfomance, she spent virtually the entire three days working on the musical. And last night, in the atrium of the school, the performers hit the stage in front of an audience on opening night.

And hit the stage they did, and hard. This cast and crew of students have poured their hearts and souls into this, and you can tell, too. The entire musical is wonderful, and the entire cast is terrific. There are moments that truly stand out, like the numbers that involve several cast members - and, well I have a weakness for the scenes that involve the orphans as one little orphan looks an awful lot like the sleepy-eyed kid I wake up for school every morning. The sets are incredibly detailed and well done, and the costuming is frankly impeccable (especially for a school performance - look, I notice clothing and costumes and these ones rank very, very highly). 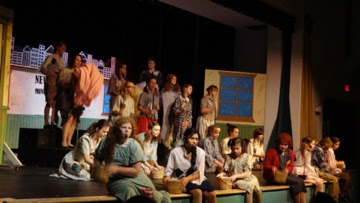 The students know their lines beautifully, and deliver the songs with the feeling intended - some are heartfelt while some are simply amusing. The character interaction is brilliant, and the musical flows nicely, with no sudden or abrupt moments to interrupt the story. 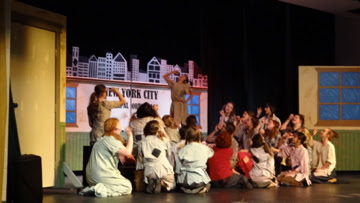 Annie is a lovely story, and likely you are familiar with it, the tale of an orphan who finds a father. Every single performer does a stellar job in this production, from the adorable and feisty Annie to the clever Grace to the slightly more reserved Daddy Warbucks to the horrendous Miss Hannigan. The chorus and supporting performers are amazing, and well, as I said I am quite partial to the orphans, and one in particular. 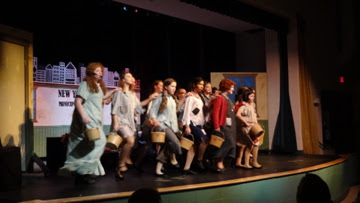 I will admit I sang along last night, quietly, because I know all the words. I managed to not break out into the dance steps as I know all the choreography, too. And, at the end, when the cast took their final bows and the IJB glanced into the audience I admit that tears stung my eyes as I watched her take in the applause that she, and her castmates, so richly deserve. 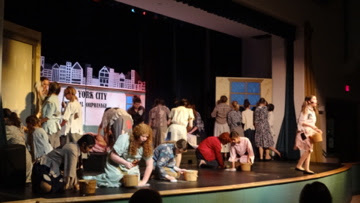 Last night after the performance when she came home she still had a dirt-smudged face, and she was exhausted. This morning she woke up and trooped off to school, and tonight she will perform again. I will be there again too, as  I have committed to being at every performance. And not because she requested this, as she didn't, but because wild horses couldn't keep me away. I wouldn't miss a single chance to see her, and a cast of other very talented young adults, perform in a wonderful musical of which they can all be proud. 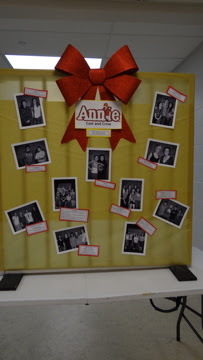 So, people. There are three more performances of Annie, and then it's over. Maybe you have a kid in school at McTavish, and maybe you don't. Maybe you don't even have kids. Whatever you do or don't have, though, I'm going to suggest that if you want to enjoy some seasonal spirit, be entertained, and see some up and coming performers on the Fort McMurray scene then come to McTavish and see Annie. Oh, and if you let me know you are coming I'll save you a seat. Warning, though. Bring Kleenex. Not for you, for me.