There is a little building on Franklin Avenue. Once it was a little blue building, although it has had a recent facelift and is no longer blue, although in my mind it may always be the little blue building. It is not a big building, and yet it helped over 22,000 people last year alone. It is a place of concern, of caring, of support, and, most importantly, of hope. It is, in fact, the Centre of Hope.

I've written about the Centre of Hope before, more than once. I have written about how the patrons and staff have captured my heart, and how this little building and those inside it have somehow become one of my favourite places in this community. I have written some of the stories of those who use the centre, and I have told of my experiences there. This past weekend I had the pleasure of attending the KD Gala, the fundraiser the Centre hosts to raise funds for the United Way.

The KD Gala is a bit different from some of the other galas in this community. I don't want to detract from them in any way, with their glitz and glamour, but the KD Gala is not like those. It is not glamourous, but heartfelt. It is not about ball gowns and diamonds but about jeans and something far more precious than diamonds. It is about life. 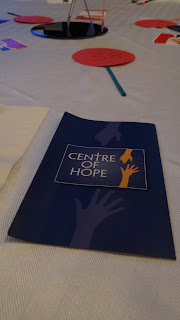 You see the patrons at the Centre of Hope are homeless, either those who are chronically in that state or in a transient situation. They are often "sleeping rough" on our streets, finding warm places to curl up at night, especially in the winter when the mercury drops and the weather is cruel. This past spring I had a chance to experience homelessness for just one night at the "Hope in the Dark" event the Centre hosted. The experience changed me. One night quickly showed me how hopeless you could become living on the streets, and how quickly you could descend into a very dark place. But in those dark places the Centre of Hope shines a beacon of light. The Centre of Hope changes lives, and it quite likely saves them.

Over the past few years we have lost many homeless individuals in this community. They have died as they lived, on the streets. This troubles me more than I can express, and it brings me to tears as I comprehend fellow human beings ending their lives this way. I cannot stand the idea of any of them dying alone, or facing their struggles alone. And so the Centre of Hope stands for me as a place where those who are homeless are not alone. They have a place where they are welcomed, not judged, and supported, not turned away. They find a community of other patrons and staff who care about them, and about their struggles. If they lose their lives on our streets, as too many have, they are mourned. They are missed. They may be homeless, but they are not without a home in some sense as the Centre becomes a daytime home for them, a place to be safe and warm and find comfort. And for this the Centre of Hope has won my heart, because in a community where we often find ourselves dazzled by the glitz and glamour this little building - this little community - shines as a true gem.

The KD Gala is a fundraiser, make no doubt, with a live auction (hosted once again by the indomitable Phil Meagher, someone who has rapidly become one of my favourite people in this community, with his quick wit and complete lack of a filter), and a silent auction. The food is not the swanky cocktails and hors d'oeuvres served at most galas but rather water and pop and dishes based on Kraft Dinner, that most basic of foods (and one most of us existed on at some point in our lives). The setting this year was inside the McMurray Gospel Assembly (and it was lovely, too, lovingly decorated and set up as a dining room instead of a church). The servers were volunteers, and the attendees were community members wearing not ball gowns and tuxedos but casual clothing. And yet somehow every year this little gala stands out as it focuses not on food and cocktails and decor and gowns but rather on people, and on their needs. 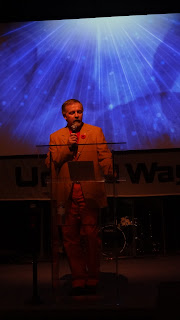 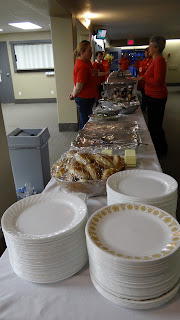 For me this year the highlight was a poem read by a woman identified only as Jackie. The voice came over the loudspeaker system of the church, a voice that was clearly a bit rough around the edges. It was the voice of someone who has seen hard times. And the poem was one that took my breath away, that brought me to tears as Jackie expressed what her life is like, and her fears.

You see Jackie's poem, entitled "My Sorrow", focused a great deal on what the mistakes she has made in her life have done to her children and her relationship with them. It spoke of the love a mother has for her children, and of her sorrow and regret that her choices have hurt them. It made me want to hug Jackie, to tell her that my own parents, while not sharing her same problems, were also imperfect and that I did not love them despite their imperfections but rather because of them, because they were so utterly human. I wanted to tell Jackie that both my parents, now long gone, had their own issues and struggles and that through it all I loved them, and love them to this very day.

This year I brought some people with me to the KD Gala. They are students from Calgary who were in the region filming a documentary on life in our community. When they contacted me several weeks ago I provided them with names of people to contact, and suggestions of places to go. And one of the things I suggested was coming with me to the KD Gala. Some may wonder at this, at why I would suggest they go to this gala that exposes some of our problems in this community instead of trying to direct them to purely positive experiences. The explanation is simple - because we DO have problems, and because we ARE doing things about them. We are doing things like supporting a little once-blue building on Franklin Avenue, and all the work they do there. We are addressing those issues, not pretending they don't exist. We are bidding in live and silent auctions and eating Kraft Dinner and raising money for the United Way so the United Way can support places like the Centre of Hope. I think, perhaps, places like the Centre of Hope show what is truly best about this community and the people in it. I think maybe they are our masterpieces as we show our commitment to the other humans in our midst, those who are suffering and struggling. I think, just maybe, our crown jewel might be a little building on Franklin Avenue that dispenses oatmeal and coffee and hot showers and 15,000 pairs of socks annually - and hope, the kind of hope that sustains you in a world that can, at times, seem hopeless. Just maybe the Centre of Hope symbolizes what we are really all about here. Maybe, in the end, we are all about hope.


My sincere thanks to
The Centre of Hope
their staff,
and all the volunteers
who participated in
The KD Gala -
and for the work they do every day.

My thanks to
The United Way
for all they do in this community.

And my thanks to a community
that supports organizations like
The Centre of Hope
and enables them to continue
to give hope to others.

During the KD Gala local Lorraine Demers performed a rendition of this.
I would like to share it with you.