Taken to The Extremities At Keyano Theatre

One of the great perks of this job is that I am now considered media, and thanks to the wonderful groups and organizations in the community I often find myself invited to events in that role. Sometimes it means I get a sneak peek behind the scenes as they set up a gala, or a backstage pass to meet a band. Last night, however, it meant I got to participate in the media call for the new play at Keyano Theatre, a play called Extremities - and one that I think will provoke a lot of discussion, and, perhaps, emotion.

When I saw the advertising for Extremities a few weeks ago I was a bit startled by the imagery. I had heard the synopsis of the play, about the dark nature of a story of an attempted rape and the aftermath in the lives of four people. The picture, though, is a haunting one. It is troubling on many levels, and perhaps most of all because it isn't just fiction, as we all know that violence is a reality.

Last night I arrived at Keyano Theatre with a few other media types, and we laughed and joked together before the director and stage designer met with us for interviews. Oddly enough I didn't speak to them, perhaps because I wanted to see the brief bit of the play they were going to present for us that night before speaking to anyone about it. I didn't want to know anything - I wanted to go in blind just as an audience member would, not having any inside knowledge of the director's vision or anything else. And so that is what I did, and I took my third row seat to watch as four marvelous local actors played out a brief two minute scene from the play.

The set itself is a bit unsettling, the wooden floor sloped and unsteady looking, the walls and door frames wonky and at unusual angles. It is perhaps the first clue that what you are about to see is a world gone topsy-turvy, full of shifting moods and emotions, moods and emotions and dialogue and action as unsettling as the set. 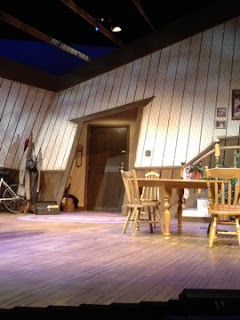 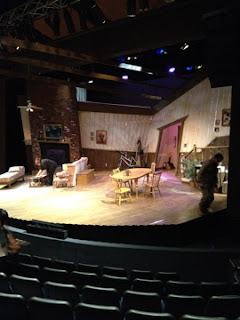 On the stage were the four actors in this play, a small cast for a play that packs a powerful punch. They played the scene twice, and the first time I took photos, which distracted me from listening to the dialogue. The second time, though, I put my iPhone down and listened to every word, and what I heard had my heart and mind racing almost immediately. 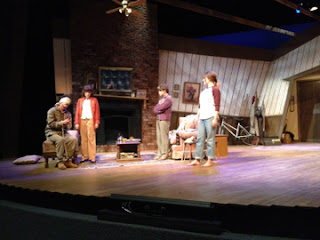 You see I won't tell you what was said in those two minutes, because I think you should go see this play and hear it for yourself. I will tell you that, as a woman, I have had those words said to me by others, by men and by women, and that those words in my own life made me angry and sad and deeply, deeply hurt. I suspect most women have heard some version of those words, even those of us (like me) who have never been the victim of an assault. Sometimes we hear those words just because we are women. 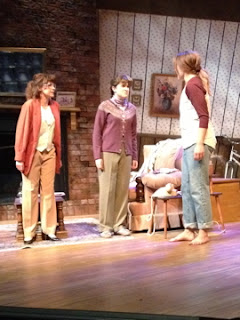 In that brief two minute scene I caught a glimpse of a play that will not be easy to watch. It will not be light and happy and playful and comfortable. It will be as challenging to watch as it is challenging to act, a fact I confirmed with Nathan Loitz, the incredibly gifted actor who plays the male role in the play. He and I chatted afterwards, as I have had the pleasure of meeting him before. He is clearly passionate about the play and his role, and as he acknowledged you will either love or hate this play - there is no middle ground. 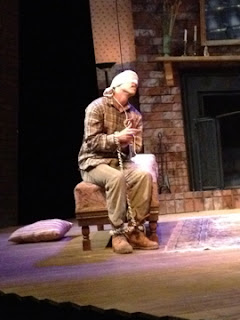 As for me - well, in two minutes I found myself experiencing a variety of emotions, including rage. I found myself slightly open-mouthed and on the edge of my seat. I found myself both wanting to see the rest of the play and dreading it slightly, knowing that it will not be easy to walk out of the theatre untouched by the experience - but that's the beauty of it.

I think drama should touch us. We could only see light and happy plays all the time, but does that provoke us, inspire us, change us? Does it make us think? I have nothing against happy at all, but at times I think we need something to come along that stops us dead in our tracks, that challenges us and makes us question and makes us think. I think sometimes we need to be taken to the extreme edges of ourselves, and left on the brink to consider the path that led us there. And so this is what Extremities will very likely do for most people - because in just two minutes it did it to me.

This morning I will be purchasing my ticket to see the play next week. I wish I could be there when it opens tonight but my own edgy adventure awaits, a trip down Highway 63 to Edmonton, and so I will not see the entire play until next week. To you, though, I say this: go see Extremities. Don't go thinking that it is light and fluffy and happy because it won't be. It will be dark and searing and possibly even painful, and it is rated R for a reason. Go see it and be taken to the edge of your seat, and the edge of yourself. Go see it and then either love it or hate it, but know why you feel either way. Go see it for four actors who take a difficult play and bring it to life with the help of their director and stage manager and all the others behind the scenes. Go see it, Fort McMurray. Just go, and be prepared to be challenged.

My sincere and genuine thanks to
Keyano Theatre
for inviting me to see a sneak preview of
"Extremities",
and my congratulations to
the cast and crew
on their accomplishment with this play.
at October 11, 2012