Chateau Boo - The Horror of Haunted Houses and Neighbourhood Disputes

I am not a fan of haunted houses. There, I admitted it. In fact the Intrepid Junior Blogger now refuses to accompany me to anything scary because of my innate tendency to scream, cry, run, and sucker punch anyone who pops out unexpectedly. She's terrified I'll end up in jail, or, even worse, embarrass her, and so this past week when I wanted to take in Chateau Boo I found myself looking for company (because the only thing worse than a haunted house is going into one alone).

I posted on Facebook and my friend Toddske from YMMPodcast immediately said he'd join me, and then a young woman named Fiona who I met a few months ago said she didn't like haunted houses either but wanted to check it out. Toddske suggested she join us, and so it was set, the three of us headed to Dunvegan Gardens on Tuesday night to get scared.

I was pleased when at a recent municipal council meeting the decision was made to allow Chateau Boo to go ahead at Dunvegan this year. It's fairly complicated with a lot of stuff like bylaws and rewording and a neighbourhood dispute gotten ugly and apparently the involvement of solders who fought for freedom (don't ask about that bit, I don't get that either but someone opposing the holding of special events at Dunvegan brought this up). The long and short of it is that this year Chateau Boo had a home (a good thing too since it was already pretty much built by that time and the cancellation would have disappointed hundreds of children - and adults) but next year the future is uncertain as the situation on Draper Road continues to wind it's way through the the municipal administration and the court of public opinion. Regardless, this year The Boo got the green light, which is how I ended up there two nights ago.

Now, it was supposed to be Toddske and Fiona and I, but at the very final hour Toddske sent a message saying he had been "delayed at site due to accidents". I'm willing to grant this is possible but it could also be interpreted as "scared to scream like a little girl in front of two women", so you take your pick. All I know is that this left two women to face Chateau Boo alone, and two women who had already admitted to not being fans of horror.

Look, I don't even like horror movies. I watched Paranormal Activity and it made me scared to go into my laundry room alone, although the Intrepid Junior Blogger told me it was the lamest horror movie ever made (so I didn't tell her about the laundry room, although the family dog is getting really tired of being dragged in there to keep me company while I put a load in the wash). So tackling Chateau Boo was a bit like scaling Everest for me, right down to possibly needing an oxygen tank to get through it.

When we arrived at Dunvegan it was cold and dark, about 8:30, and I heard some screaming. Okay, it was some kids playing outside but it still set my teeth on edge. We walked to the entrance, opened the door, and stepped into the den of horrors.

Oh, it seemed innocuous enough on the surface, the admission guy who took our money and stamped our hands. But things got a little weird with the creepy figure at the entrance banging the baby doll against the wall. It was dark and it was a bit cold and frankly I was already horrified and I hadn't gone in yet.

After it was all over Fiona thanked me for going first, but I'm thinking maybe she misunderstood. I haven't seen a lot of horror movies but I've seen enough to know that I'm not the one who is going to be at the back of the line, as they are always the ones who are noticed missing at some point with people saying "hey, where did so-and-so go?". So-and-so ended up getting their brain eaten or some other such terror, and so while she thought I was being brave it was purely self-protection. We entered the haunted house and I went right into my "haunted house" mode.

What's that, you ask? Well, it's back to the wall, sidling along very slowly, cautiously lifting the drapes separating the rooms. It's peering carefully around corners and watching for shadows. It's being ready to run for the nearest exit, and trying to control my hands so they don't form fists and sucker punch some creature of the night that is just an actor in a suit. It's me, wearing not heels but Timberland boots, not a dress but jeans, with enough adrenalin in my system to run a marathon as if a horde of zombies were nipping at my brain.

And so we went through Chateau Boo, me in front, sidling along the walls. There were some hallways that particularly disturbed me, the white-sheeted one with bloodstains and body parts particularly making me wary. There was the werewolf character that seemed so still that I was sure it was a mannequin until I approached close enough for him to jump out at me eliciting a shrill shriek. There was the creepy baby in the crib, and all the rest. And then, just as we entered one hallway, there was a shadow on the floor. It was the shadow of hair.

Not just any hair, but clown hair. I whispered "There is a creepy clown right behind this corner", and when I turned there he was. Look, people, nobody likes clowns. I apologize if you are of the clowning-kind but frankly Stephen King ruined clowns forever, at least finishing clowns off for those of us who thought there might still be some hope for them and hadn't already been clown-traumatized. Clowns are now part of the creepy lexicon, and in fact might just be the creepiest. So, when I turned the corner and saw the clown the same words left my lips that I had been chanting since we entered Chateau Boo: "DO. NOT. LIKE." But I went into "do not like" overdrive, repeating it as we finished The Boo, left the last room, and dashed out to our respective cars. I'm pretty sure every person in Chateau Boo from the nice security people at the escape doors to the werewolf to the clown was pretty sure where I stood on things - "do not like".

And the funny thing is while I did not like the clowns and the body parts and the gore I LOVED Chateau Boo. I said good-bye to Fiona and got in my car, and sat there for a few minutes while I collected myself. I realized that I had some sort of chemical rush going on in my system, a fight-or-flight reaction that had pretty much taken over my body, and I knew I needed to calm down a bit. I had been frightened, no doubt, but in such a good way. As many of you know Chateau Boo is a fundraiser for the local Boys and Girls Club, an organization that does such amazing work in our community. They are one of the many non-profit organizations here that does so much with so little, that preserves the quality of life in this community, with staff and volunteers that give of themselves so others may benefit.They have been putting on Chateau Boo for many years now, and it has become a staple part of the local pre-Halloween scene. And I am damn proud of them all for doing it, too, even in the face of adversity and a neighbourhood dispute and all the other headaches that go along with mounting this kind of event.

I'm going to take a moment to talk about that neighbourhood dispute here, and some won't like what I have to say - but I am going to say it anyhow. One of the comments made to council about not allowing an exception for events like Chateau Boo was that it wasn't just that they didn't want it in their backyard, but that it shouldn't be in anyone's backyard - and I fundamentally disagree. If Chateau Boo wanted to set up in my backyard I would let them, because even though I am not a fan of haunted houses I am a fan of what this event does for the Boys and Girls Club. A few nights of inconvenience and shrieks and cars and people and laughter? I could deal with all that because I would be PROUD to have it be part of my neighbourhood and community. I would be delighted to be part of it in any way. I would try to put aside any animosity that had been generated by a neighbourhood dispute and I would instead delight in a community coming together with laughter and screaming and clowns. What I saw Tuesday night was not a defiant act of those who wished to disrupt a quiet little country residential neighbourhood. What I saw was not the latest salvo in a neighbourhood dispute raging out of control and threatening to rip apart the very neighbourhood it hopes to protect. What I saw was a little non-profit organization trying to raise some funds in a very fun, very scary, and very community-minded way. Others may see it differently, and they are entitled to do so, but that is what I saw. Well, all that and a clown, too.

So, Chateau Boo. Thanks for the memories, the adrenalin rush, the sleepless night, and the clown nightmare. Thanks for making me remember why haunted houses are so great, and reminding me why I shouldn't watch horror movies. Thanks for giving me a chance to look brave while actually leaving poor unsuspecting Fiona behind me so that she got eaten first should there be a zombie attack. Most of all, thanks for raising money for The Boys and Girls Club. In the end I "do not like" clowns and zombies and werewolves and neighbourhood disputes - but I really, really like Chateau Boo, and all that it stands for, too.


My sincere thanks to
The Boys and Girls Club
and all the volunteers
who made Chateau Boo a reality this year,
to Fiona for coming with me,
and to RMWB council
for allowing Chateau Boo 2012
to be a reality.
And to the creepy clown - yeah.
I still don't like you.
And I'm not sorry, either. 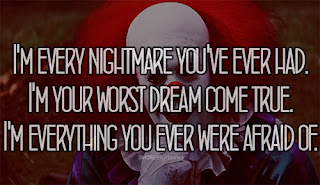