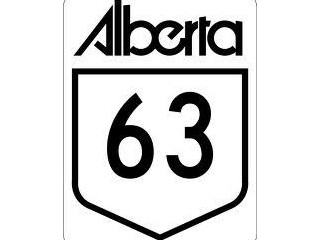 When the invitation popped into my email inbox I knew I would say yes. A "sneak peek" media tour of the newly twinned section of Highway 63, 36 km near Wandering River, travelling on a Red Arrow bus, and in the presence of some local and provincial politicians. What caught my attention, though, was the statement at the bottom of the release indicating that "announcement materials" would be made available on the bus, and that the entire trip would be subject to a media embargo until a certain time (an embargo means you are held to secrecy until the information is made public to all). I think I knew right then that something big was going to happen, and I knew in my heart what it was.

You see this has been a long journey, this trip on Highway 63. I have always travelled that highway, many times in the decade we have lived here, but on April 27 of this year it became in integral part of my life in ways I never expected. That night, after a day that saw seven people die on that highway, two survive, and hundreds of lives changed forever, I sat down at my laptop and opened this blog. One of my favourite quotes about writing is this: "Writing is easy - you just sit down at a keyboard and open up a vein." And that's what I did that late spring night. I sat down, opened a vein, and bled pain and fear and sorrow and anger all over this blog page. I did it in the form of an open letter to Premier Alison Redford, and I cried while I wrote it, sickened by the deaths of so many, but particularly by that of one little girl named Faith, who was only one year younger than my own child. I closed my laptop and went to bed, never expecting my world would be forever changed by one simple act. I woke up in the morning to discover thousands had already read the letter, and the readers kept coming. I woke up to requests for interviews with provincial media covering the accident. I woke up to discover that Highway 63 and I had started a journey together.

Since that day I could not tell you the number of times I have written, talked, or thought about Highway 63. I have researched it, written about it, discussed it, and mourned over it as more lives were lost. I travelled on it again several times, but with new eyes each time, seeing things in ways I never had before. And somehow I earned the moniker "passionate advocate for my community", a name I am proud to bear, but one I wish had never come to me through tragedy. I have been to several press conferences about Highway 63, like when newly-elected MLA Mike Allen was named Special Advisor. The one on Friday was different, though. The one on Friday is when, just as I asked in April, the rubber hit the road.

The bus ride down to Wandering River was mostly silent, early as it was. Coffee in hand I did some work, and then the officials passed out some announcement materials. First was the announcement that, weather permitting, the newly twinned section would open this month, not next year as anticipated. This was good news, but I had the sense that there was more. And I was correct. The next document handed to me was the one I had been wanting to see for months. My hands shook as I read. It said simply that Highway 63 twinning had been fast-tracked. And the new date proposed was the fall of 2016.

I will admit it because you likely know already. I had tears in the corners of my eyes as I read it, as I read the plans to fund the twinning, and as I read a document that I see as a pledge and commitment to saving lives. I read it again and again, trying to absorb every nuance, and then, before I knew it, we were at Wandering River and driving on that new blacktop highway. 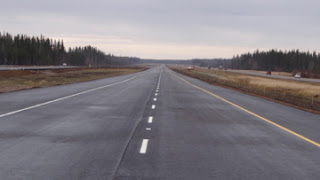 When the buses had stopped, one from Edmonton full of media and dignitaries, one from Athabasca, and ours, we filed out into the brisk wind and cool fall temperatures and light rain. We gathered in front of a podium and waited as politicians took their turns in making announcements, and then, finally, Minister of Transportation Ric McIver said the date. He said the year 2016, and it was official. There were smiling faces all around, and there was a sense of accomplishment. As we stood there, in the distance where vehicles drove on the still untwinned section of Highway 63, horns sounded as people drove by and realized that something, something big, was happening, and it involved the highway that is the lifeline of our community. 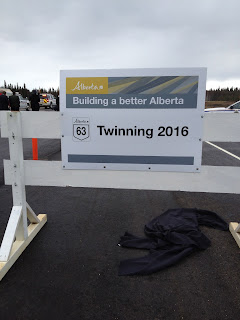 To commemorate the opening of  the newly twinned section they had at the ready a vehicle to drive on the fresh pavement, and again there was the photo op as politicians removed the barricades so the vehicle could drive on through. There was photo ops with local emergency vehicles, and there was the usual media scrums. For myself, though, there was this other need. 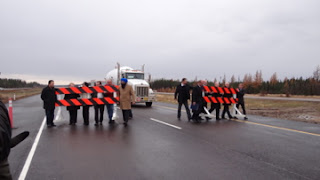 I snuck away close to the end of things and walked to the edge of the new blacktop. I removed my gloves, so needed to protect my hands from the cold fall air, and I leaned down. I touched my hand to the blacktop, and laid it there, feeling the black surface gently. There were some highway construction workers standing there and they found this very amusing, this woman touching the road they had just built, and they asked what I was doing. I looked up and told them that this is what success looks like in Fort McMurray, that success looks like twinned pavement stretching from Grassland right into our community.

You see, as I touched that asphalt I was thinking about all the lives that had ended on blacktop just like the one underneath my hand. I thought about the hundreds of lives changed, and the ocean of tears shed, some of them my own. I thought about how this blacktop, this simple road, could save lives, and as I watched cars and trucks drive by on the non-twinned section of Highway 63 I thought perhaps it could save their lives and they would never even know it. There were tears in my eyes again when I stood up, tears remembering some of the names of those who died on Highway 63, and there was something else. There was hope. There was faith.

As I said in interviews with media later that day I am optimistic. I am hopeful that all the things needed to accomplish twinning are in place, like money and commitment and a timeline. I also indicated that the community would be watching, and that we would hold those in power to account. I said that we would make sure this pledge and commitment was not forgotten, and that while we had optimism it was not blind.

After I arrived home from the announcement I sat down to write a story on it for a local newspaper, and I struggled horribly with it. I suppose it is because it was so difficult to write a dry and facts-based piece on a little highway in northern Alberta that has become the ribbon that runs through not just our boreal forest but my life. In some ways my life now feels tied to that highway, like we began an intimate dance on April 27, 2012, a dance that is nowhere near finished and really just beginning. As I wrote I kept remembering the feel of the cold asphalt under my hand, and I kept remembering how this highway was where so many lives have ended. Finally, in the end, I gave up and shut my laptop, too overwhelmed once again to finish that piece on the highway, a piece that would need to wait for me to sort out some of my personal feelings over it all. 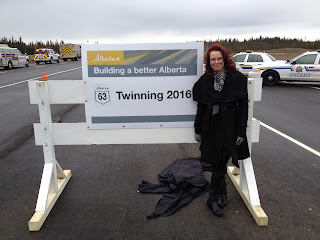 Late that night, in my kitchen, I lit a candle. I lit it in memory of little Faith, and the memory of all those who died on Highway 63. I lit it thinking about the lives that would be saved, and I lit it thinking about how that highway had changed so many lives, including my own. When I blew the candle out I stood there in total darkness, the only light the streetlights shining through my kitchen windows, and I wept as the tears I had held in all day were finally released. I cried an ocean of tears for a ribbon of road, and for all those who had been bound to it in some way by the same ribbon that binds me to it. I cried until I could cry no more, and then I went to bed, hoping and believing that in the fall of 2016 I will cry again as I touch my hand to a fully twinned ribbon of road that meanders through the boreal forest, and right into the heart of our community. 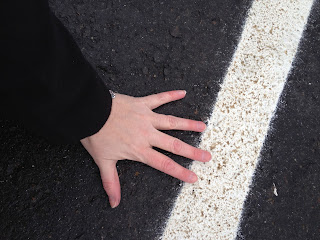