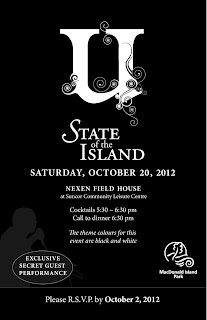 When the invitation hit my inbox I was delighted, of course. I adore a good party, and after having attended last year I knew that MacDonald Island Park throws a helluva party at their annual State of the Island event. It's an event designed to reflect on the past year at the facility, and to look ahead at the future (a very exciting future given the new expansion plans). One thing about the invitation puzzled me, though. What was the "U" all about?
I invited my best friend to join me for the evening, and when Saturday night rolled around we headed down to MacDonald Island, found a parking spot, and headed inside to find the field houses transformed. 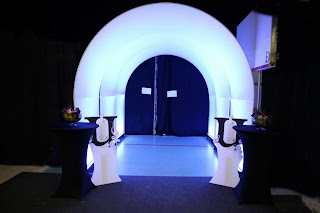 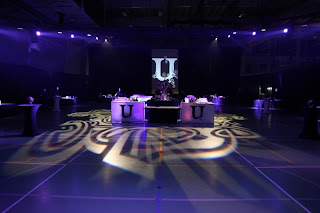 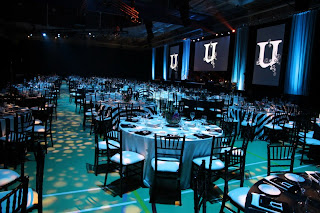 Photo courtesy of MacDonald Island Park
The Mac Island staff do such an amazing job with these transformations. It always astonishes me that they can take those field houses and suddenly turn them into something like a black and white themed nightclub.
My friend and I wandered the crowd, stopping to chat with assorted guests and about assorted topics. I must admit I didn't try any of the available appetizers as I was waiting for the meal, and hadn't really eaten all day in preparation. The reports from others, though, indicated the food was great (as it usually is, as Mac Island has truly stepped up their culinary game in stellar fashion over the past year or so under new direction and leadership).

When the time came to eat we filed into the other field house, which had again been lovingly decorated and dominated by enormous "U"s everywhere - but still no explanation as to what was up with that "U".

We sat at our table and met our table mates, and then settled in for food and entertainment, both of which was plentiful and flavourful. Masters of ceremonies Sheldon Germain and Russell Thomas entertained the crowd, MLAs Mike Allen and Don Scott made an appearance on stage, and there were some of the usual speeches about Mac Island. The running theme, though, was memories. 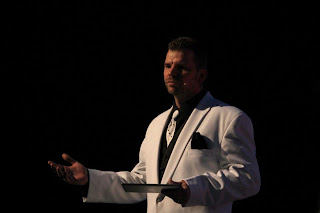 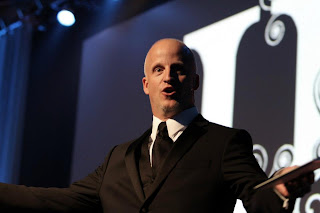 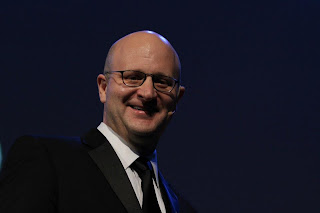 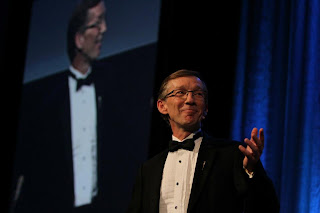 Photo courtesy of MacDonald Island Park
You see, every guest shared some memories from times at Mac Island. I have a few of those, too, hundreds in fact from over the decade I've been here, and most of them involving my Intrepid Junior Blogger. She was 2 when we arrived, and just barely 3 when she began skating lessons at Mac Island. Every week we would arrive at the arena (as we called it then) and she would bundle into a little red snowsuit with little red mittens and step onto the ice in little skates that fastened with velcro. Over the years the snowsuit became elaborate figure skating dresses, the mittens became colourful and fashionable gloves, and the velcro skates became authentic figure skates. She went from a toddler just learning to balance on ice to a young woman who did spins and jumps, and, when she decided to leave the figure skating world, became a young woman who attends rock concerts and meets musicians like Down With Webster and Hedley.

I have some memories that are just mine, too, like joining the fitness centre at Mac Island. You see, I'd never had a gym membership before, and I was terrified. I thought I'd feel out of place, like an alien that had wandered in - and yet from my very first day the MI staff made me feel so at home. I've been neglectful recently of my gym time, and while part of me fears returning after such a long absence I know that they will say "good to see you" when I do drop in, and not "where the hell have you been?". And then there all the memories from events I have attended at Mac Island to those I have volunteered at, and so much more. As I sat there on Saturday night I reflected on what an integral part of my life Mac Island has truly been, and as I looked around at the gathered guests, about 700 of us, I knew that it had been the same for most, if not all, of them.

There were several deeply touching moments on Saturday night. When John H. Wilson was named to the Mac Island Walk of Honour for all his work in this community, and his commitment to it, his tears were genuine. He spoke of his years here, marrying here and raising children here, and it was so very touching to see his love for this place that I love so dearly too. When Helen Bishop was introduced as someone who was born on Mac Island 90 years ago I got chills (and have them again right now) as the changes she has seen in this community over her life are nothing short of astonishing. To see her get an orange MI jacket, to become part of the MI family, was a moment of pure joy. 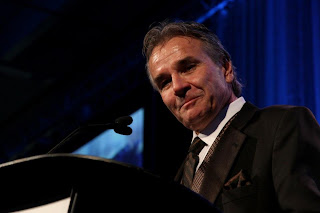 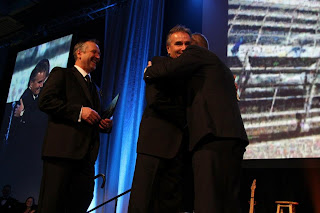 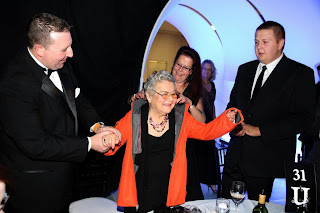 Photo courtesy of MacDonald Island Park
There was the recognition of new sponsors, and existing ones. The announcement of an investment from Shell Albian Sands of 2.5 million dollars into the new expansion was an exciting moment, and now that the new expansion has a name - Shell Place. There were speeches from board members and the mayor, presentations and the revealing of a photo collage made up of hundreds of photos taken at Mac Island. But, for me, the best moment was the speech from COO of Mac Island Tim Reid. 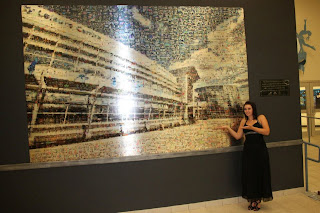 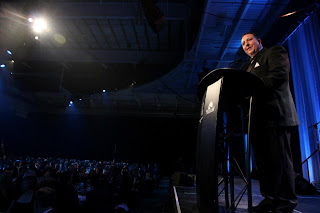 Photo courtesy of MacDonald Island Park
I'm going to take a minute here to talk a bit about Tim. I've had the pleasure of getting to know Tim fairly well over the last year, and his commitment and passion for Mac Island and this community is incredible. He is a consummate professional, but he is so much more. He is a visionary of the best kind, bold and thoughtful and brave. Tim is taking our little "arena" and bringing it into the future. Tim is the best steward for the heart of our community that I could imagine. Tim is, in a word, amazing. So, for me, the best moment was Tim's speech which was, as I told him later, pure gold. He explained that this year instead of crunching the numbers for us - golf balls lost and grass blades cut, tickets sold and visits logged - it was about us. It was, in fact, about you - U. It was about the fact that Mac Island is not about golf balls and grass blades and tickets and visits but rather about what it means to this community, about the dance between the facility and the users, about the relationship it has developed with you - U. And there it was, the explanation for the "U". This year State of the Island wasn't about Mac Island really - it was about you, and what you bring to Mac Island, and what it can bring to you. It was, for me, the crowning moment, even more so than what came next.

You see, what came next was the surprise musical guest - Jann Arden. As someone who has listened to Jann since the beginning of her career I was delighted to finally see her live, and discover a woman who is sincere and authentic and funny as hell and more talented than I could have ever thought possible. She gave a spectacular performance, mesmerizing the audience, and even playing "Good Mother", a song that always brings me to tears as I remember my now-gone but much loved own good mother (and hoping that I too am the "good mother" my daughter deserves). It was a stunning end to a wonderful evening - and made even more so when, after Jann left the stage, my friend and I were able to meet her backstage for a photo and a few quick words (discovering that Jann is as lovely in person as she is on stage, and in every single way). 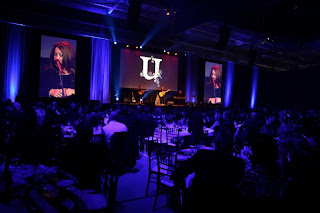 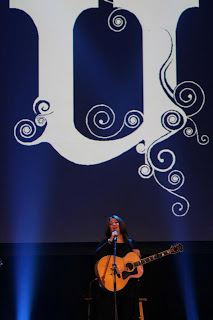 Photo courtesy of MacDonald Island Park
As we left that night we were handed some commemorative books about a day in the life of Mac Island. It's a beautiful book, lovingly photographed and full of familiar faces. It is about a day of memories at Mac Island. It is, I guess, about you - U. I went home that night thinking about what Mac Island has been in my life, what it has meant to me and my family, and how it has touched my life. I thought about the times I spent there, and all the memories made. I thought especially about New Year's Eve 2011 when I watched fireworks while standing in the snow outside the Fox Den, my arms wrapped around the Intrepid Junior Bloggers, one of them my niece who has now gone back home to Newfoundland and the other my own daughter, and realized I would never forget that moment. Saturday night State of the Island celebrated you, and me. Saturday night I didn't learn how many blades of grass were cut last year, or how many golf balls went astray. Instead I learned about how the place I have come to see as the heart of our community has fixed itself in so many memories - including, it seems, my own.


My sincere thanks to
MacDonald Island Park
for inviting me to attend
State of the Island 2012
and for all they do
for our community.
I would also like to thank them
for allowing me to feel in some
small way like part of the MI family :)
at October 24, 2012