One Young Woman, A Crazy Number of Dogs, and A Challenge - Mush McMurray Takes on the Yukon Quest 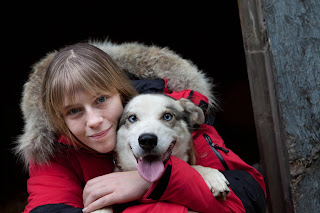 As regular readers of this blog already know I am quite obsessed with three qualities - passion, vision, and drive. When I meet someone who possesses these qualities it isn't long until I too am infused with their passion and vision, and it often doesn't even matter what it revolves around. When it happens to involve something that I am already curious about, interested in, or find intriguing then it occurs even more quickly - and so it was when I had lunch recently with Christina Traverse, a young woman who has become associated with the moniker "Mush McMurray".

What's unusual about Christina, you might ask? Well, she's a lovely young woman, intelligent and funny, but that isn't the really unusual bit. The unusual bit is that she is a musher, someone who has sled dogs and participates in the world of sled dog racing. It's a world that is a bit foreign to me, but one that has roots and tradition that go far, far back in our northern Canadian culture. Christina wasn't always a sled dog owner and racer, although she told me that when she was young, long before sled dogs entered her life, she would harness up her brother and drive him around pretending he was a sled dog, and then the family dog became the target of her game (likely once her brother started hiding when he saw her coming, I imagine). It seems Christina was fated to end up as a musher, and so she has, a young woman of 23 participating in a sport and hobby that tends to not be the first choice of many young women.

When Christina and I sat down we talked about how she got into sled dogs, and how she has participated in some sled dog races. We talked about the epitome of sled dog racing, the Iditarod, and how that gruelling race challenges even the most seasoned of competitors. And then she began to tell me about the race she will take on in 2013, a race called the Yukon Quest, and while the Iditarod sounded difficult the Yukon Quest didn't sound like a picnic, either.

You see the Yukon Quest is a 1000-mile race, running from Whitehorse, Yukon, to Fairbanks, Alaska. 1000 miles doesn't sound so awful in terms of a car trip but when you start to talk about it as a dog sled race, through a thousand miles of wilderness, in snow and ice, and with temperatures dropping to -60 degrees, it suddenly starts to sound a lot less like a trip and a lot more like an ordeal. I watched Christina's face and while I suspect my face showed some fear hers showed excitement at the thought of taking on such a daunting task. She talked about her sled and boots and sleeping bag and special equipment and "snow hooks" (to stop the sled and keep the dogs in place when you stop, an essential piece of equipment as she told me what happens when you stop to answer a call of nature and the dogs decide to take off, sled flying behind them, and you, pants around your ankles, racing behind them to catch up). There was a moment her face truly lit up, though, and it wasn't when she talked about the prizes at the end of the Quest or the accolades. It was when she spoke about her dogs. 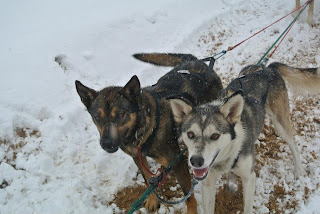 Christina loves her dogs, and that is very plain. She currently has 22, with another 7 dogs coming soon. I can't imagine taking care of that many of anything, let alone barking, howling, pooping, and whining creatures, and yet she is absolutely calm about it. This is a young woman who pours all her money into those dogs, buying food and paying vet bills, ensuring that their well-being is secure. She spoke at length about her research on different dog foods, on needing to ensure they have enough fat and protein for peak performance and health, and I quickly realized that dog sledding is part history, part sport, and part science.

Christina is training hard for the Yukon Quest, often taking the sled dogs out for runs that last from before dawn until well after dusk, because even when the day of sledding is over there are dogs to feed and clean, pet and cuddle. I asked her the biggest challenges of the Quest and some were those I hadn't even thought about, like sleep deprivation. After all, how does one sleep when you are supposed to be trying to cover dozens of miles in a day, and when the dogs require attention, and when if you drift off you fear the dogs could take off and leave you behind in the cold? (I doubt I'd sleep a wink with that fear in the back of my head, frankly) And then there are all the other more mundane concerns, like freezing your feet or your hands, you or the dogs getting ill or injured, problems with equipment...the more she spoke the more I knew I could never do something like this, but the more she spoke the more animated she became. You see Christina isn't "in it to win it", although she would like to post a respectable finish. No, she would like to simply finish at all, to achieve something that few people will ever even attempt, to challenge herself and her abilities and her will to see if she can do it at all. And she wants to do it with the dogs she loves, and with whom she shares a deep and enduring bond. 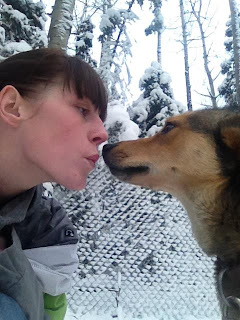 One of the things Christina needs is sponsors. Sponsors help a dog sledder to pay for essentials, and they too can become a part of the team with their name and logo displayed to show their support of the musher. Sponsors can do more, though, especially in an instance like this because Christina is, in my opinion, a shining example of what young people can do in this community. She has a dream, a dream that began perhaps when she was harnessing up her poor brother to race him around the house, and she has followed it. She has encountered obstacles, no doubt, and she will continue to find many blocking her path - but in Christina I see that Fort McMurray spirit that will help her find a way around - or right over - any obstacles in her way. I think local businesses would do well to find a way to support this young woman and those like her, because they are fundamentally what is best about this community. People like Christina are the ones who make us proud to be from here, who show the world who we are and what we do, who share their vision and passion and drive, and who let the world know that we in Fort McMurray are so much more than oil sands and all the misconceptions about how we live and who we are.

You have a chance to meet Christina too, people. She is holding a very special meet and greet event on Saturday November 24th at 11 am at the MDRA race track on Highway 63. There will be a bonfire, hot chocolate and hot dogs, and there will be real dogs, too, as Christina brings her team along to be greeted. And then she and her team will head down Highway 63 to travel to a very special place in Christina's heart. You see another thing about Christina is that she is cousin to Justin Slade, a young man who lost his life on Highway 63 a few years ago, a loss that is still very fresh and very painful for this young woman. She will take her dogs on a little pilgrimage in memory of Justin, and she will travel Highway 63 in the memory of those who lost their lives just like her beloved cousin.

Now, when you come to the meet and greet (and I am going to assume you are because you'd be crazy to miss it) I am going to suggest you bring along a little cash, because this is also a fundraiser. I've done some calculations on what it costs to feed and house a couple of dozen dogs, and the number is staggering. Then factor in what it will cost for Christina to get to the Yukon, to transport her dogs and her sled, and all the other costs associated with the adventure, and you will quickly realize that what she needs is cash. This is money well spent, people, because it is money to be part of an adventure. It is to be part of a dream, to see a young woman go out and represent the youth of this community in a positive and inspiring way. 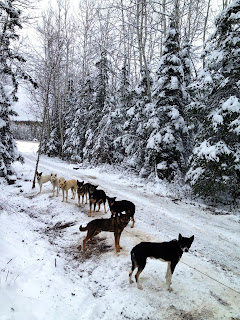 On Saturday November 24th you will find the Intrepid Junior Blogger and I meeting and greeting with Christina and her dogs. You will find us sending her off down Highway 63 as she takes a journey in memory of her cousin and all those others we have lost on that little ribbon of road. You will find us petting dogs and laughing with Christina and bursting with pride at the tenacity and courage of a young woman who is not only ready but excited about the prospect of a 1000-mile race through frigid temperatures and uncertain territory in February 2013. You'll find us cheering on someone with vision, passion, and drive - just as it should be in this place called Fort McMurray, where those qualities are not only present but abundant in young women like Christina Traverse. We will be there celebrating our community - and Christina. 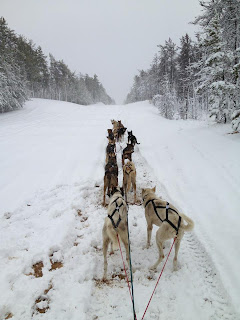