Girls Inc. Zombie Run (Or How I Almost Lost My Brain) 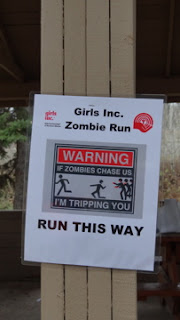 Sometimes I hear about an event so novel that I can't help but be captivated by it. I catch word of some happening or some fundraiser and it captures my imagination and attention, and I know that I have to be there to witness it, not just for this blog but for me personally as a member of this community. And so it was when I heard about the Girls Inc. of Northern Alberta Zombie Run.

Girls Inc. is a wonderful non-profit organization directed at young women in our community. Their mandate is broad but fundamentally it's about empowering young women, and as both a woman and the mother of the 13-year old Intrepid Junior Blogger I endorse this concept heartily. I think this is a world that is infused with mixed messages in the media about the role of women, and about what constitutes beauty and strength. So, Girls Inc. has always held a special place in my heart for this reason, and when I heard they were going to hold a zombie run fundraiser I was delighted.

What is a zombie run? Well, it's exactly that. You run - and you run a course that has been attacked by zombies, zombies intent not on stealing your brain but rather the flags attached to you. The zombies in this run were not allowed any physical contact with the runners, and there was no actual brain eating (well, not with the runners anyhow, although as I will explain later I had a bit of a personal scare with all that brain-eating stuff). Instead the runners, who paid a $40 registration fee and collected pledges, were given three flags to wear, flags the assorted zombies would try to steal. 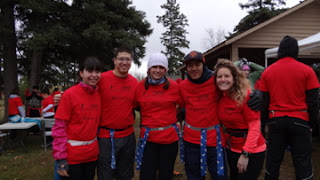 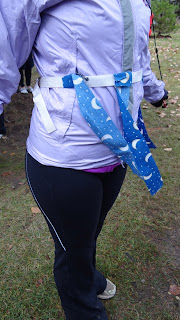 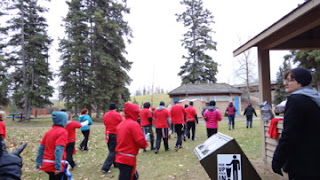 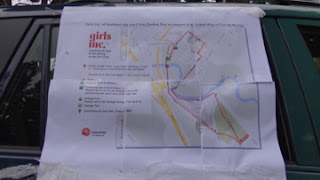 Saturday morning was quite cold when I arrived at Lion's Park, where the runners would set off to run or walk a course through there, Howard Pew Park, Corless Field, and Heritage Park. I snapped some photos of the rather chilly participants, assuring some that they would likely warm up as soon as they saw their first zombie coming at them. I watched as the first group set off on the course, and then I tried to figure out where to station myself for the best action.The kind folks from Girls Inc. gave me an inside story on where I could find the most zombies, and off I went to Heritage Park, the normally sedate little history park that was now full of the undead.

In some cases my words tell the story best, but not this one. I think, in this case, what you really need are the photos, so here goes... 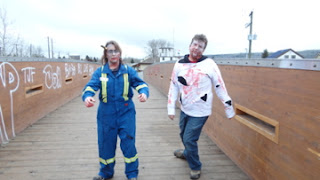 These two met me on the bridge. I admit to being disturbed. 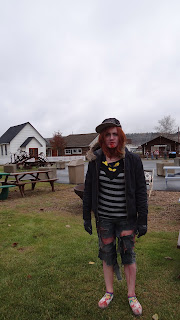 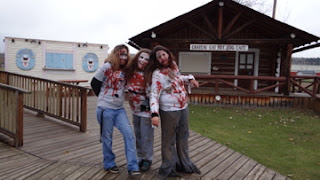 Hamming it up for the camera, zombie-style. 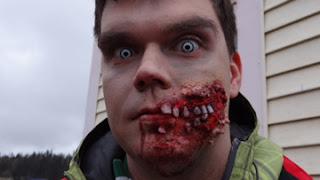 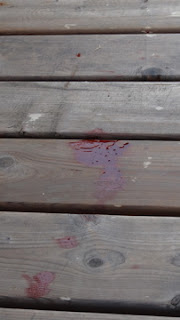 Blood on the boardwalk. Creepy. 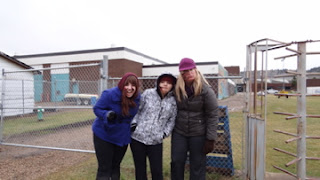 Almost too cute to be zombies, really. 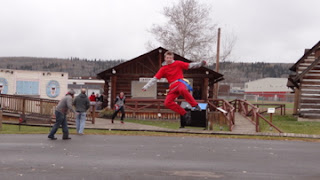 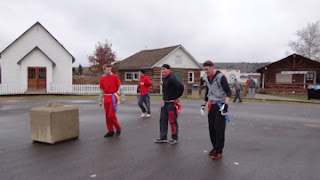 They shouldn't look relieved yet. They still have to
find the way out of Heritage Park -
and there are more zombies to meet, too. 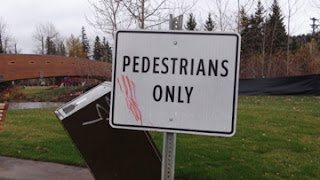 Bloody handprint. Not a good sign of what lies ahead. 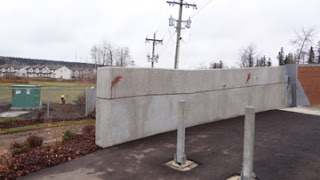 The entrance to the bridge, and bloody handprints
signifying that you will soon encounter... 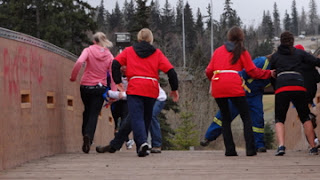 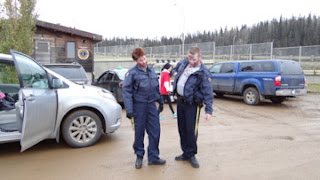 I'm a bit worried about some members of our local constabulary.
They look dead tired.

I could say the Zombie Run was fun, but that's an understatement. Laughter rang out in the cool autumn air as runners encountered horrifically convincing zombies. Every runner I spoke to after the finish line told me they would do it again, and they told stories of being pushed into the path of the zombies by their "friends" who used the distraction to escape. They laughed and joked, some telling me they kept all their flags while some told me they lost them all immediately to the zombie hordes. The mood was light and happy (despite all the fake blood), and the event, I would say, a complete and utter success. Considering the current prevalence of zombies in popular culture, the proximity to Halloween, the chance for a good time, and the opportunity to raise money for a great organization I suspect this event will become an annual tradition. The fact that in the very first year all registration spots filled (about 100 runners) and there were 40-50 zombie volunteers shows that this event will be one that will see repeated success.

I decided after a bit that I was quite frozen, and began to head to my car. The runners were still trickling in, and zombies from the start of the course were beginning to head back to the starting point, too. I was walking towards the parking lot when I was distracted briefly, and suddenly I was grabbed from behind. A small strangled yelp escaped me as I realized I was in the clutches of a zombie - a zombie who turned out to be my own personal zombie expert, friend, and fellow writer Roddy Cross, author of a zombie e-book (and someone who enjoys startling someone already wary of zombies, and who is prone to shrieking). I hugged my zombie friend, and then off I went, leaving behind me runners and zombies to enjoy a BBQ - which I think was hot dogs and burgers, not brains, but I can't say that for sure, really. 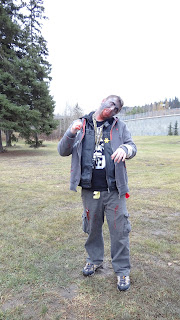 My sincere thanks to
Girls Inc. of Northern Alberta
for welcoming me to the
2012 Zombie Run
and my congratulations on a terrific event!

To all the runners and zombies -
you guys are amazing.
You endured the cold, the damp, the mud,
and the woman with the camera,
and turned this event into a
brain-eating good time! :)