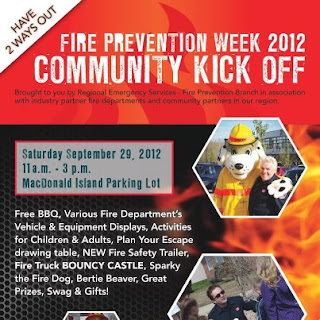 Things change, and thing stay the same. In this blog post I'm going to give you a little glimpse into my life, and an idea of how things are changing for me. I sense a wild ride ahead of me and I'm both amused and slightly terrified. It all involves the Intrepid Junior Blogger, or IJB for short.

Saturday morning of this past weekend I told the IJB I was headed to MacDonald Island to check some things out. I wanted to see what was going on at the Wood Buffalo Corporate Challenge, and I wanted to check out the kick off for Fire Prevention Week. The IJB seemed vaguely interested so I enticed her with an offer of a trip to the mall and a treat from Starbucks, which was enough to get her dressed and in the passenger seat of the car.

Now, the IJB just turned thirteen, so it's official. I'm parenting a teenager, and frankly it was a bit of a mental hump to get over. Now the IJB is a terrific kid, smart and funny and beautiful - and she's also a cynic, a skeptic, and a handful when it comes to opinions (I have no idea where she gets ANY of this from, must be her father's side, right?). So, we hopped in the car, and headed to Mac Island.

When we arrived we saw fire trucks and cranes, all set up for Fire Prevention Week, and I suggested we check that out first. We wandered over and began inspecting the fire trucks, and checking out the information booths (incidentally it seemed much bigger than last year, much better, and much more well attended, too). That's when I spotted one of our local mascots. The ensuing discussion went something like this:

Me: Hey, why don't you go stand beside that mascot so I can take a photo?
IJB: Why don't you go stand beside that mascot and I can take a photo?
Me: No, seriously, I want a photo for the blog. Go stand beside the mascot.
IJB: No, seriously, it's your blog, why can't you stand with the mascot for the photo?
Me: I don't like mascots. They scare me.
IJB:  I don't like them either. They're creepy.
Me: Well, that's not what you said in Disneyworld and I have the photos to prove it.
IJB: I can't believe you took me to Disneyworld and made me stand with all those mascots.
Me: Whaddya mean? Do you have any idea what it cost for those character meals where you got photos with all those mascots?
IJB: Probably cost less than the therapy I'll need to recover from the trauma of being surrounded by creepy mascots. I was just a kid, I can't believe you did that to me.

And that is why there are no photos of either of us with a mascot, people. But I do have the photos from Disneyworld and I swear some day they will appear at her wedding to prove that she did, in fact, hug mascots at one point in her life and she liked it, too. 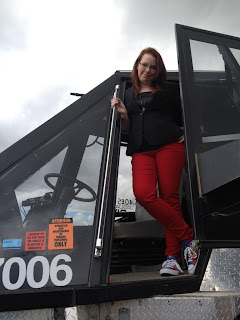 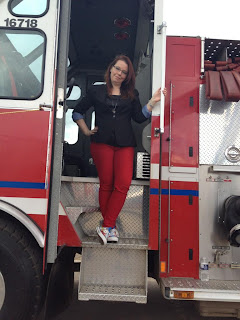 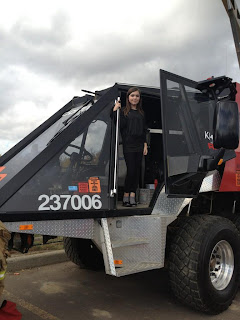 But I digress. Convincing her to take photos inside the fire trucks was a bit easier, and we meandered around doing that for a bit. Then we found the fire safety house and after some coaxing (meaning me saying I was going in with or without her) we went inside with a couple of young firemen and talked about fire safety. 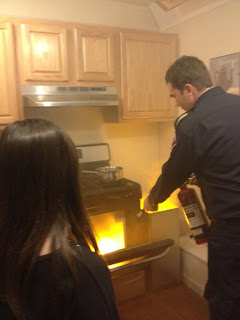 The first room, the kitchen, was a bit smoky and hazy, and the fireman talked to us about kitchen fires. The IJB has taken Foods class in Junior High and so she is quite up to snuff on fire safety of this sort, and she and the young fireman discussed how you handle kitchen fires. Then he taught her to use a fire extinguisher (reminding me that we don't actually have one and to add that to my list of essential items to purchase). After the kitchen we moved onto the bedroom, and there the "fire" was on the other side of the door and the fireman explained how you escape from a house fire of that sort. The littler kids around us began going through the window where another fireman on the other side helped them to the ground, and I stated that I was NOT going out the window (I'm sorry but you don't want to know the contortions it would take to get this body through a one foot by two foot window, thanks). The IJB agreed and decided she would exit through the door as well, and that's what we did. As we were walking away, though, she turned to me.

"You know," she said, "I would have gone out the window. Did you see the fireman on the other side lifting the little kids out? He was cute." I think I choked a little as I realized my kid is now way past mascots and into noticing cute firemen, although I couldn't really blame her (what woman doesn't notice cute firemen, really?). 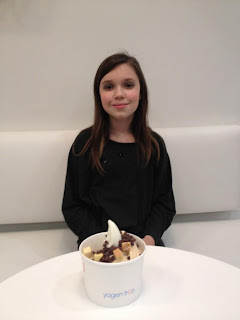 We were both pretty happy with our fire prevention week kick off, and I, still reeling from our conversations, quickly agreed when she asked for some Yogen Fruz from inside Mac Island to end that little part of our adventure. The mall and Starbucks awaited, but we sat in Mac Island for a bit, sharing banana split frozen yogurt topped with cheesecake and chocolate chips and discussed mascots and fire trucks and fire safety. We talked about how events like this are aimed at families and how little kids like them, but how even moms like me - and their teenaged daughters - like them too. And then we discussed which fireman was the cutest, but that conversation, people, will remain between the two of us.

My thanks to everyone
who participated in the
Fire Prevention Week kick-off,
and congratulations on such a
well-attended and well organized event!

And to the mascots -
don't take it personally,
as we are sure you are lovely people,
but the IJB and I want nothing to do with you ;)
at October 03, 2012