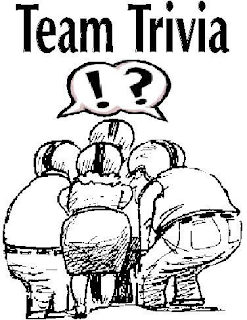 So, what do the four things in the title of this post mean when linked together? Well, they seem to mean trouble if my recent experience is any indication, because this past weekend I was part of Team YMMPodcast at the Team Trivia event hosted and organized by the Fort McMurray Public Library - and frankly our team started to slide sideways as soon as we spotted the cash bar.

A few weeks ago my buddy Toddske from YMMPodcast asked if I would be interested in being part of his team for this annual event. I said yes, of course, being one to rarely say no if there is a chance of entertainment and blogging potential. The original team line-up was Toddske, myself, a lovely young woman named Ashley, and Tito from the podcast - except it turned out Tito couldn't make it, so we needed a fourth. On a whim I suggested my husband, who accepted - and as it turned out our "fearsome foursome" not only did reasonably well we quite likely provided most of the entertainment, too. 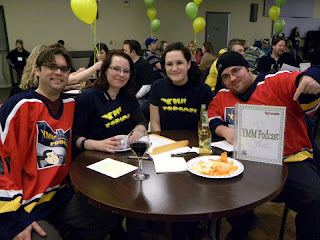 Team YMMPodcast
(photo credit to FMPL)
For those who don't know Team Trivia is in it's 14th year. That's a pretty incredible accomplishment, keeping an event like this running that long, and I was curious to see what exactly it was all about. I learned it's about trivia, teams, having fun - and a cash bar, too.

My husband and I arrived at MacDonald Island at 6:30, the time I was pretty sure the doors opened. To my chagrin we were in fact 1/2 hour early, but they still let us in and even let my husband purchase a glass of wine (I decided to be the designated driver, although as the evening wore on I rather wished I was drinking). We picked a table right up at the front (quite honestly had I known then what I know now I would have selected one at the back, so we wouldn't have been quite so obvious in our merriment). While we waited for our team mates we checked out the layout - and the competition.

The format is pretty simple - teams sit at tables around the room, with a maximum of four per team. Each team is given sheets to record their trivia answers, and there are 10 rounds with 10 questions each. The moderator reads each question twice, you record your answer, and then the answer sheets are collected and scored. Seems simple enough, and it is, of course. It's a lot simpler if you know the answers, which was sort of our stumbling point.

The evening began well enough, and our answers were reasonable. By about Round 3, though, I noticed that even though there were only 3 people at the table drinking there were 9 drinks on the table in various stages of consumption. And while we had been silly before things got even sillier, descending at moments until Team YMMPodcast was practically in tears from fits of giggles. When Toddske insisted that the character Lilly from Sesame Street had been introduced to address the topic of eating disorders and the correct answer was actually poverty he theorized that really poverty is a form of eating disorder (leading to those mad giggles as he was quite adamant about it, too). And when Ashley shared that the Queen had been a Girl Guide after a Girl Guide-related question we sort of went off track discussing who exactly in the palace would have been buying her cookies. The vision of a plaintive little future monarch trying to sell cookies to the maids and butlers pretty much did us in. And what province was the CP Railway built to entice into the country? Our first response was Washington - with the admonition that we hadn't said it was a successful ploy on the part of CP. My tendency to blurt the correct answers out loudly (meaning that other teams could hear them, as the moderator Rolando helpfully pointed out to my chagrin) led to more general amusement, as did the comment Ashley loudly made that caused Rolando to laugh so hard he spewed his drink out his mouth and all over his suit jacket. There was the time in Round Seven when I considered abandoning ship as I'd lost all semblance of control over my team (including my spouse) and feared that as the only sober person I'd be held responsible (I gave that up when it was clear no one else wanted me). And then there was the very end of the evening when my team began attacking the helium balloons at our table and inhaling the helium, but that's better not mentioned, really.

I admit it. We knew about half the answers, and we made up answers to the rest. Since the library employee in charge of official judging was named Nicole a lot of our answers consisted of things like "We love Nicole!" in hopes of swaying her towards granting us some points. And when things got desperate we answered "Steve Reeve" to several questions (Steve is a local DJ and friend, and since it was his birthday we figured it would be nice to include him - look, I didn't say what we did made any sense, did I?).

At the end of the evening we placed 13th out of 27 teams, not a horrible showing by any means. I'm pretty sure in terms of side-splitting laughter  and making a spectacle of ourselves we were absolutely Number One, though. And the very best part is that we were heading from Team Trivia to Longshots, where our buddy Steve was celebrating his birthday - and those kind library folks let us take all the helium balloons we could stuff in my car (and actually more than we could, which is how I ended up driving down Franklin trailing about a dozen balloons sticking out of my trunk and looking like the town clown car). And that's how we ended up showing up for Steve's birthday as trivia losers but total birthday party guest winners when we presented him with about 70 helium balloons. 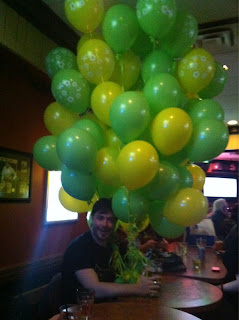 In the final analysis Team Trivia is a total blast, people. The great thing about events like this is they can appeal to everyone from those in their twenties to old people like me, and they involve some knowledge, friendship, team work, and a whole lot of laughs (I noticed as the evening wore on the tables around us started to get silly, too, although whether it was alcohol or infected by us I'm not certain). I would like to sincerely thank EVERYONE at the Fort McMurray Public Library for organizing and hosting the event, Syncrude for sponsoring it, all the volunteers who worked at it, the Mac Island staff for great food and drinks, and all the teams who attended for not demanding Team YMMPodcast be tossed out for rowdy behaviour. It was a pretty awesome evening, way better than I ever anticipated, and next year I'm coming back. But next year? I'm drinking, too :)


These are the team names from Team Trivia.
Totally hilarious names!
And these are the final standings! 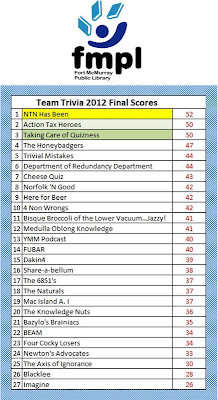 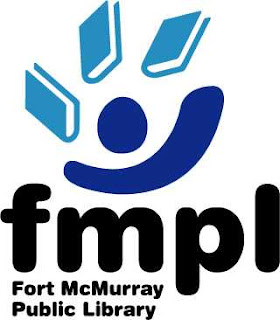