And Then There Was Peter Silverstone and Patrick Moore Talking Oil Sands...

One of the things I don't write about a great deal in this blog is the oil sands. That's not because I am blind to their existence or disinterested - it's because I feel I just don't know enough to write about them intelligently. I think there are far more educated and wise people out there writing about these topics, and so I generally leave it to them. This time, though, I had the privilege to hear two different presentations at the recent Leading the North conference, and both were about the oil sands. They were both intriguing, but for vastly different reasons, and despite my limited knowledge I'd like to share some of what I learned with you. What made it most interesting is that the presentations were made right after each other, leading to a sense of juxtaposition you rarely see in most conferences. I admit it - by the end of the two presentations I had some ideology whiplash, and I think you will soon see why. 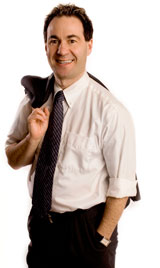 Peter Silverstone
The first presentation came from Peter Silverstone, who seems like an odd person to be writing and speaking about oil sands. He is not an environmental scientist or engineer, and he's not in industry. He's a physician, and a very accomplished one, too, with a long string of academic and research credentials. The question becomes why he is interested in oil sands, and I suspect it's simply because he's an extremely bright man who is curious about many things, and this just happens to be the one his mind settled on at some point.

Peter has spent a good deal of his life doing research, and he brought that experience with him when he began looking at the oil sands and their development. Through this research he came to a conclusion - we have a real problem, and the problem is that no matter how we spin it the environmental cost of our industry could mean the end of it. Peter argues that climate change does exist, that the oil sands do contribute to greenhouse gas emissions, and that as a result our industry is in serious jeopardy from outside forces. He also contends that using a fact-based argument to counter an emotional plea will always fail (and I've been saying this for years, really - facts in the face of emotion always lose as we are fundamentally emotional creatures, and not always logical ones). 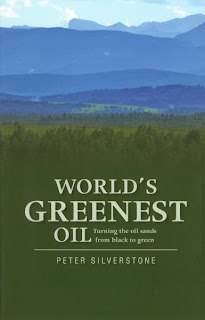 Peter's solution, as proposed in his book "World's Greenest Oil", is to tie royalty rates to greenhouse gas emissions - the more GHG produced by a company, the higher the royalty they pay. In this way not only do we encourage environmentally sound development we also improve our international image by showing that we intend to hold industry economically accountable for their practices. It was an intriguing suggestion, and I followed his logic carefully.

What I found most interesting, though, was the audience's reaction as Peter spoke. There was essentially absolute silence - because what he was saying was uncomfortable, troubling, and worrisome. He was coming to Fort McMurray and fundamentally saying that we could end up having the oil sands quite literally shut down due to outside forces determining that our oil is too "dirty" to continue to be used. This is not an easy sell in this community, and I was fascinated by the disquiet it seemed to engender in the gathered conference attendees. At moments you could hear a pin drop, and it was perhaps the quietest presentation I'd seen at the conference, no laughter or murmurs of agreement. But there wasn't a lot of murmurs of disagreement, either, because I think most people in the room recognized some grain of truth in what Peter was saying. I doubt all agreed with his conclusions or even his contention that the industry could be shut down - but I think most understood that we do have an image problem at the very least, and it was being laid out in front of us, stripped bare for all to see. Later that day Ian Hill spoke again (an address I will write more about, too) and one of the things he discussed was the concept of "courageous conversations" - and I think Peter Silverstone was holding one of those with us on that Friday afternoon.

After Peter finished there was a short break, and then it was on to the next presentation, and a speaker quite opposed to Peter in some ways and yet similar in some respects, too - Patrick Moore, one of the original Greenpeace founders, and self-proclaimed Greenpeace dropout. 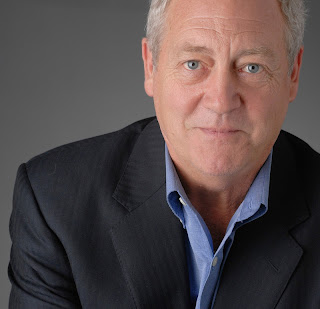 Patrick Moore
I was very enthusiastic about hearing Patrick speak since we have one thing in common - I too am a Greenpeace dropout. I can't claim to be an original member or founder, but I was a member for many years in my high school and university days. I was young and idealistic and Greenpeace appealed to me for many reasons, mainly because it was all about effecting change, and I was all about change in those days (as attested by hair that never stayed the same colour for more than a few weeks at a time).

Patrick's presentation differed from Peter's right from the beginning - because Patrick doesn't think we should worry about a thing, really, and he is no oil sands apologist. He is instead an oil sands proponent, and he calls himself a "sensible environmentalist". He believes the oil sands are being developed in an environmentally responsible way, with reclamation technology being pursued at a rapid pace. His presentation was wide-ranging and spoke to the world's reliance on oil, and about how we can develop a resource and do so in an sustainable and both environmentally and economically sound way.

What intrigued me most about Patrick's presentation, though, was the response from the audience compared to Peter's. Where the audience had been quiet for Peter, either due to discomfort or disagreement, there was loud laughter for Patrick, and exclamations of agreement. Patrick was preaching to the choir, though, to an audience made up of people from the north, many of whom depend on oil sands development. What he said was what everyone wanted to hear, while Peter said things that made us pause and think for a bit about what the truth might be. And that, people, was the juxtaposition.

After both presentations I went and spoke to Peter and Patrick. I told Peter that I believe that fact-based arguments fail against emotion, and I told him that I think what he had just presented needed to be said, even if I didn't necessarily agree with all of it. I bought a copy of Patrick's book ("Confessions of a Greenpeace Dropout"), which he kindly signed for me, told him that I too was a Greenpeace dropout, and we chatted a bit about why we both left the movement (and in the end it was about idealism gone wrong, really, for both of us). And I walked away from both presentations being impressed once again at the calibre of those brought to this conference, and at the ideas they presented for us to explore.

You see in the end I don't fully agree with either Patrick or Peter. I listened to both presentations, and both of their books now sit on my desk waiting to be read and considered. I have tremendous respect for both individuals, intelligent, thoughtful men who have lived fascinating lives and done incredible things. Most of all, though, I have tremendous appreciation for those who organized the Leading the North conference for bringing people like this to Fort McMurray - the Northern Alberta Development Council, the Regional Municipality of Wood Buffalo, the Fort McMurray Chamber of Commerce, the Northeastern Alberta Aboriginal Business Association, Fort McMurray Tourism, and Community Futures Wood Buffalo. The opportunity to sit and listen to Patrick Moore and Peter Silverstone, despite a mild case of ideological whiplash, was a genuine pleasure, and one that left me, and I suspect many others, thinking for a long time about what they had to say. And that, in the end, is what every truly good conference should do.


You can find more on
Peter Silverstone at
World's Greenest Oil
and on
Patrick Moore at
GreenSpirit
at February 04, 2012