"Ladies and Gentlemen, I present to you a story of murder,
greed, corruption, violence,
exploitation, adultery and treachery.
All those things we hold near and dear to our hearts..."
I've actually never been to Chicago. I mean Chicago, Illinois. Last night I went to "Chicago, The Musical", right here in Fort McMurray, and it was quite the little escape from winter. It might have been cold outside but the temperature inside Keyano Theatre was sizzling hot, and rose rapidly over the evening as the musical unfolded before a delighted audience. I was the grateful recipient of an opening night ticket thanks to the generousity of a dear friend, and so she and I found ourselves at the theatre last night.

I admit that just like the city I've never seen the full musical Chicago before, either, just snippets of it. I knew it would be funny. I knew it would be full of talent, as we have an abundance of that here in Fort Mac. I didn't know it would be a raucous, slightly raunchy, rollicking joy ride of murder, mayhem, betrayal, infamy, adultery and sheer laughter. But that is what Chicago, presented by the cast and crew of Keyano Theatre, was.

There will probably be a lot of mention made of the skimpy costumes worn, and they were quite dazzling. The young men sans shirts were indeed quite entertaining, and I'm betting the men in the crowd got a bit goggle-eyed over the lingerie-clad women in the cast. But for me the costumes were quite frankly the least interesting thing. What shone was the talent, just as it should, and the costumes were mere backdrops to all of that (charming and enticing backdrops, but backdrops all the same). 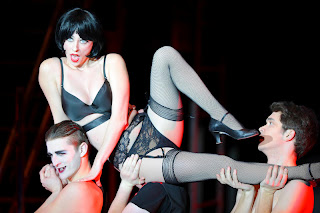 Photo credit to Keyano Theatre
From the moment the cast took the stage I was transfixed as the story unrolled before me. It touches on so many facets of human behaviour, from our propensity to cheat to our seemingly unquenchable thirst for fame (even if it is the sort of fame that can lead to a death by hanging). The show is a comedy, of course, but the satire certainly isn't lost in this age of "celebrity" trials where those accused of some horrific crime suddenly appear on the front page of every paper and on the screen of every TV.

Some of the performances were truly astounding, like that of Jenny Price as "Mama" Morton. I believed her character for every single second. As for Amanda Campbell as Velma Kelly and Alexandra Price as her rival for fame Roxie Hart? Once again totally believable in their roles as they duked it out to see who would be the winner in the "murderous celebrity" category, only to be overshadowed when others guilty of more heinous crimes push them out of the limelight. Adam Zacharias as Amos Hart/Mr. Cellophane was very much the woebegone forgotten and invisible man, and Jeff Hoffman as Billy Flynn made that roguish, money-hungry, dapper lawyer all too real. And Mary Sunshine the reporter? Well, I'm not sayin' anything about that character. Go see the show, and be ready to laugh your butt off (and if anyone ever refers to me as "Mary Sunshine" they and I will have words, guaranteed). 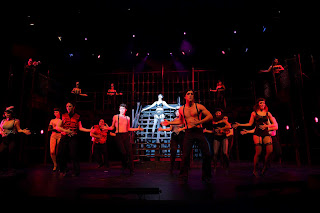 Photo credit to Keyano Theatre
Certain song and dance scenes were especially delightful, like "Razzle Dazzle", and the courtroom scene was a complete hoot, particularly the two cast members who were playing the jury and kept quietly changing hats and wigs (leading me to wonder at times what the hell they had on their heads now). The entire ensemble did a wonderful job of singing, acting and dancing, bringing the audience to applause and cheers time and time again. And, at the very end, the entire audience granted the cast and crew a well-deserved and resounding standing ovation.

What I can tell you about Chicago is this - it is sheer fun, pure entertainment, and a gleefully good time. If you look a bit deeper into it you see the satire and you can reflect on how it parallels so much of what we see happening with the concept of celebrity. The joy of it is this, though - you don't need to look deeper. You can enjoy this musical on whatever level you choose, from the fabulous sets to the great laughs to the alluring costumes to the satire. You can just sit there and be entertained as hell, which is what I was. And which I believe the entire audience was, too, judging from their expressions after the show and the comments they made while exiting into the lobby of Keyano Theatre.

It was opening night, so there was a champagne reception, but the sold-out crowd in the lobby was making me claustrophobic so I grabbed a pot of creme brulee´ (thanks Sawridge, it was awesome!), collected my coat, and hit the road still giggling at the show. I cannot think of a better way to spend a cold winter evening than in sizzling hot Chicago, and until February 25th you can save the plane fare. You can just head to the Keyano Theatre box office, buy some tickets, and settle in for the wildest ride of the 2011/2012 theatre season. Chicago came to Fort McMurray last night, people, and I think it just might be responsible for these unseasonably warm temperatures we are experiencing - because frankly the cast, crew, and entire production were on fire. No wonder all this snow is melting today. Chicago is burning the place down ;)


My sincere thanks AND congratulations
to the cast and crew of
"Chicago, The Musical".
You are ALL amazing! 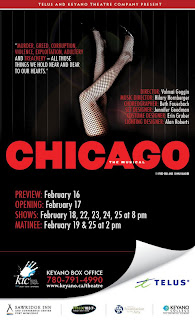