It Might Be February But winterPLAY Is Gonna Be Hot, Hot Hot! 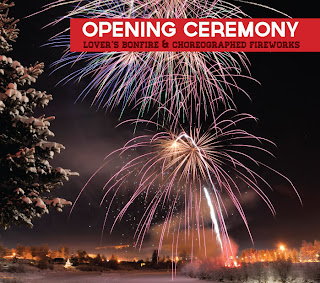 Well, people last night I attended the opening ceremonies for winterPLAY 2012. As I wrote the other day I was pretty excited about the start of this event, but really I had no idea what to expect. And what I got? Well, it blew any of my expectations out of the water - because the gang at Events Wood Buffalo put on a stunner of an opening ceremony. If this is any indication of the next couple of weeks then we are in for one helluva winter party, Fort Mac. Last night was billed as an evening of "sparks" - and it wasn't just a spark, people. It was a full-on raging inferno.

I arrived at MacDonald Island Park right at 7 pm and found people trickling onto the golf course where the opening ceremonies were being held. There was a hot chocolate tent, sponsored by Decadent Pink (the recent event celebrating and honoring women), and they even had mini cupcakes (mmm, hot chocolate and cupcakes, supper for one blogger who shall remain nameless). 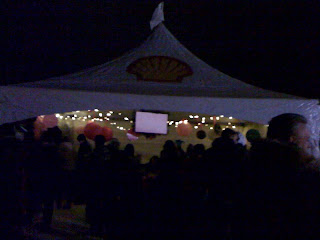 There was a huge skating rink, sparsely populated at first but those skating made up in enthusiasm what they lacked in numbers. 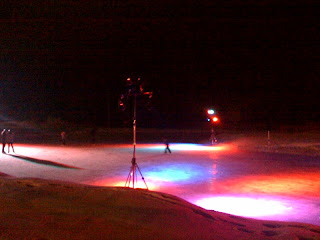 There was the "lover's bonfire", which was the perfect spot to drink hot chocolate, eat cupcakes, and cozy up to your loved ones, be they big or small. 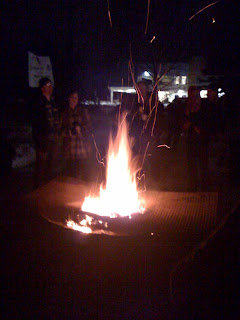 The real focus was the stage, of course, and as soon as the official ceremonies began I maneuvered right in front for the best possible view - and I'm bloody glad I did, because what a show it was! The ceremonies began with the folks from Events Wood Buffalo, including Executive Director David Whitelock who delivered the address from our mayor as she was needed at a city council meeting and couldn't attend the opening. Hearing Melissa's speech delivered in David's raucous Scottish accent was almost entertainment enough, but it was really just the beginning of the show. Then we heard from a representative of Syncrude, title sponsor of the festival (yay Syncrude!). 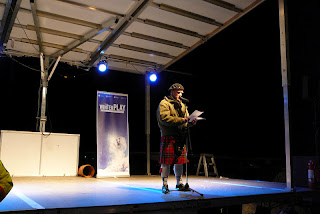 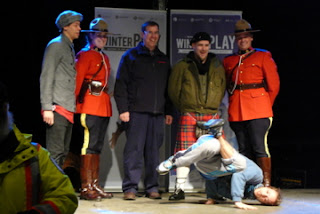 Following the speeches we got a sneak preview of one of the very first acts at WinterPLAY this year - Champloo. Since I was right up at the front and a shameless veteran eavesdropper I heard them talking about when they would hit the stage - and hit the stage they did.

Champloo is a b-boy dance group from Bristol. See how blurry these photos are? That's because my poor camera couldn't keep up with the movements, and fast motions combined with a dark setting leads to very blurry pictures. I'll tell you this, though - those boys are jaw-dropping good. They can move in ways that quite likely isn't normal and will likely lead to arthritis when they are my age. After seeing this little preview I cannot wait for Thursday to see "White Caps", their multimedia presentation, at the Suncor Energy Centre for the Performing Arts. They have shows Thursday, Friday, and Saturday, and I think they are an absolute must-see. 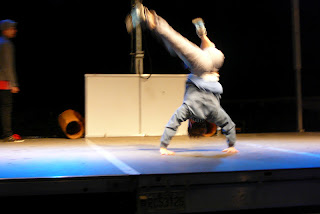 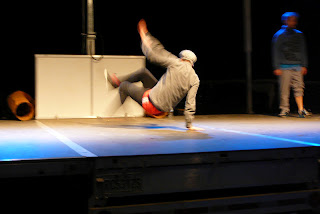 Up after Champloo was a troupe from Calgary called "Firestorm". Ever wanted to dance with fire, hula hoop with fire, breathe fire like a dragon? Yeah, me too, but being rather terrified of time in the burn unit it's rather nice to watch some other brave souls do it instead - and "Firestorm" are those souls. 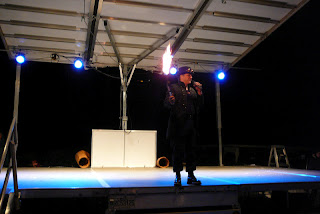 Phoenix does a lovely dance with fire, mesmerizing and haunting. And the young blonde man named Rootez who hula hoops a fire ring? Well, he gave a whole new meaning to "ring of fire" and frankly I thought he was adorable (tall, thin, blonde, moves like a maniac, and unafraid of fire - I keep telling you people I'm old, not dead, and certainly not blind to the charms of such a performer). 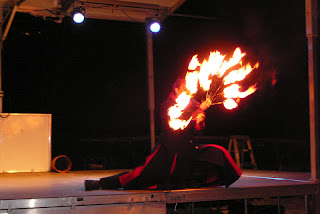 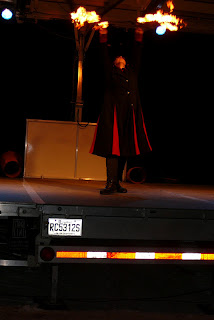 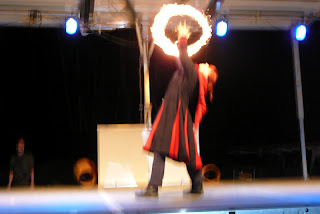 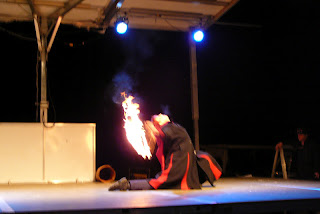 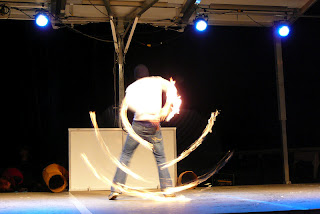 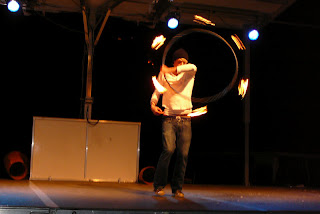 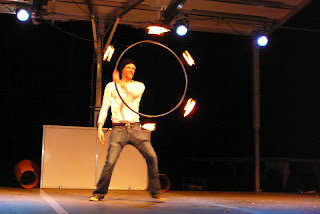 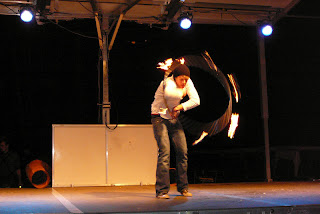 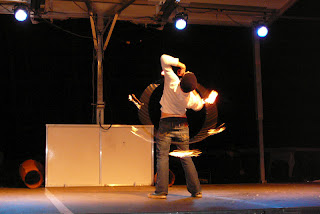 And things got a little warmer when he removed his T-shirt and started making little hearts with hands, too. Well, I felt warmer anyhow, no idea about the external temperature as I wasn't paying much attention to my frozen toes anymore. 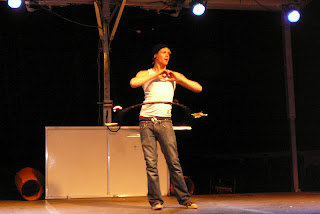 The finale, the act that saw every "Firestorm" performer on stage, and so much fire that you could smell the gasoline, was astonishing. The troupe leader who "breathed" fire? Awesome, I genuinely wish I could do that in traffic some days to express my displeasure. And Phoenix, cracking that fire-covered whip? Wow! 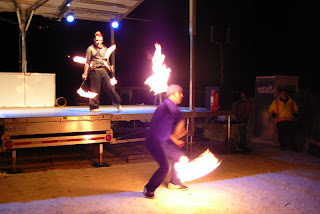 I was close enough to the above two that I started to get slightly woozy from gasoline fumes and I think they got gasoline on my coat, too. It's okay, I don't plan to send my cleaning bill to Events Wood Buffalo, that's just what I get for wanting to be in the front row. 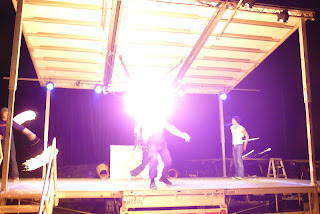 Yes, that is fire being blown right at me. And yes, I DID back up. And this is what it looks like when a fiery whip is cracked at you: 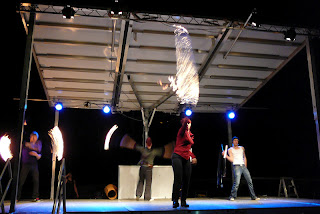 After "Firestorm" finished their performance the next treat was of an incendiary nature indeed - fireworks. But not just any fireworks, mind you. Fireworks beautifully choreographed to music. Fireworks that included red hearts bursting in the air, stunning the overwhelmed crowd. I was delighted by the comments I overheard from those watching - things like "amazing", "wow", and "best ever". I'm going with "best ever" (I would also accept "breathtaking" and "outstanding") because I think it's the most incredible fireworks display I've ever seen, definitely here and perhaps in my entire life. Beautiful, thematic, timed wonderfully to the music - a genuine joy to behold. 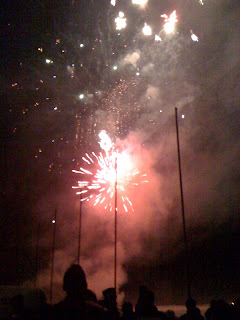 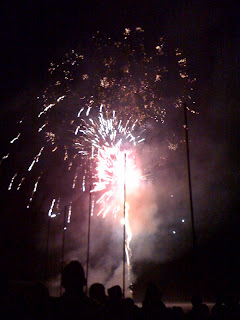 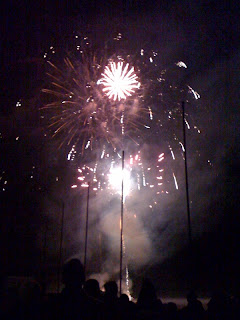 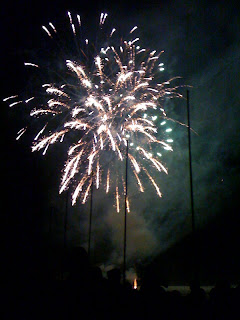 These two are fireworks exploding above the stage that moments before had been filled with fiery whips, hula hoops, and torches... 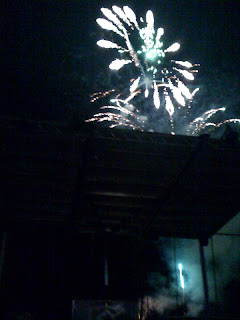 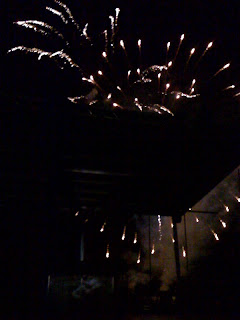 And these two - do you see the hearts? So sweet for Valentine's Day... 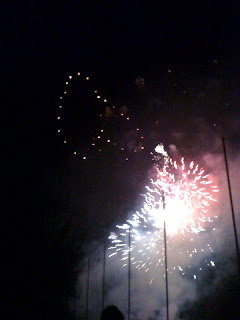 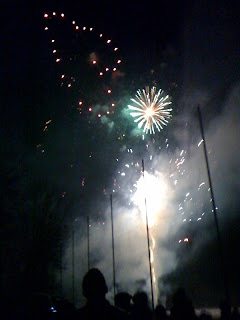 Look, people. I've been to a lot of events here over the last decade. All I can say is that if this is a sign of what the next couple of weeks are going to be like then I may just pass out from sheer excitement. When I arrived home I grabbed the older Intrepid Junior Blogger and told her about Champloo (two cute British guys who can dance their butts off? Yeah, she's coming with me to their show on Thursday). What had been me going out to some winterPLAY events is rapidly becoming our entire little gang going out to every single event we can hit (the dog isn't going to be very fond of us when this is all over as she likes us at home where she can keep those anxious little terrier eyes on us). And I will tell you this now - if you haven't been planning to attend any winterPLAY events start booking tickets NOW. Start with "White Caps" by Champloo, because you won't be disappointed. And then just keep booking tickets, people. I haven't checked the weather forecast for the next two weeks but regardless of what the temperature is expected to be I can guarantee this - winterPLAY is gonna be totally smokin' hot!