You know, it really all began quite innocently when I wrote in this blog about my little non-crush on Peter Mansbridge. I had been thinking about attending the Leading the North conference, but what sealed the deal was discovering that Peter would be speaking - and, well, I admit it, I like Peter Mansbridge, and always have.

Peter was in fact the final keynote speaker, and I looked forward to his address for two days. I admit something else, though - I'm a pretty mischievous sort, and not the kind to shy away from some entertainment. And after my initial blog post about my wee crush on Peter got some amused attention I decided I would play to it a bit further, and this is when things got quite interesting.

Yes, that's right, I officially declared it "Peter Mansbridge Day". And honestly things sort of went sideways from there a bit:

That was after someone commented on my excitement over Mansbridge and suggested additional security may be required. I wasn't done yet, though:

If you notice carefully there is that little "@" symbol in front of Peter's name. That means these tweets would be clearly visible to him should he actually read his Twitter. And that last tweet? It was after he'd tweeted a photo of his plane being de-iced, and I knew he was on his way. Was I done yet? Oh no!

Those two would be after his plane landed, and when I discovered he had arrived at the conference. And, just before he began his address, I tweeted this to my followers, who seemed terribly amused by the whole thing:

When Peter finally took the floor that iconic voice and image was almost overwhelming. He spoke of being Canadian, and of what that means. He spoke of Canadians as we travel around the world, and about how the world sees us. He told funny stories about being mistaken for the leader of Poland when he was in the Vatican for the funeral of Pope John Paul, and he spoke of other stories from his career, time spent in Asia after the tsunami and in Holland for WW II memorial ceremonies. And, as I knew he would, he tied it all together beautifully, with thoughts on who we are as Canadians, our identity, and our role in the world. And when he finished I gathered my courage, grabbed my camera, and stepped to the front where a crowd was waiting to meet him.
When my turn came I took a deep breath and said "Mr. Mansbridge, I don't know if you read your Twitter, but if you do - I'm the crazy one". He looked at me and with a grin said "Yes, there has been a crazy one in the last twelve hours, that was you?", and I nodded, and the camera flashed: 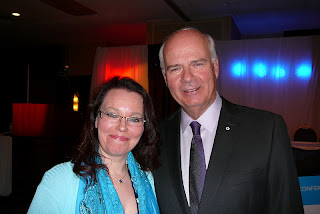 Peter Mansbridge and I
And then, finally, I tweeted this:

What I learned is that Peter Mansbridge is a lovely man who didn't call for extra security, and who seemed like a pretty bloody good sport considering he'd been reading my comments all day on Twitter. Even better is that evening after the conference I got a phone call from a dear friend asking if I would like to attend a dinner - a dinner with Peter (and Ian Hill, too!). And so I ended my evening by introducing my husband to Peter. I told Peter about the blog, and about how my little crush on him had taken on a life of it's own, and about how it had amused and engaged so many people who hadn't been able to attend the conference to see him. And you know what, people? He was polite and charming and as wonderful as I knew he would be, and it was indeed a pleasure to meet someone who has had an incredible career, experienced amazing things, and become a true Canadian icon. And my crush on Peter, which was really always quite tiny, transformed instead into deep respect and admiration - which is far better than a silly crush any day. It was truly the perfect end to an amazing three days of conference. In the end, you see, I had come for Peter Mansbridge, but I stayed to lead the north - and I am so very, very glad I did.
My sincere thanks to
Leading the North
organizers and sponsors
for three amazing days
right here in Fort McMurray - and for
the chance to meet Peter,
of course!
at February 01, 2012