And A Little Child Shall Lead Them - Nathaniel Crossley, African Well Fund, and Leadership 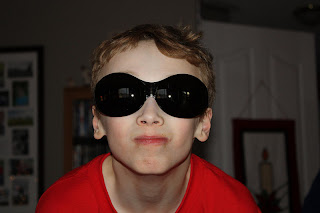 Photo credit to Nathaniel Crossley
There are times when I meet people who blow me away. They are people of passion, and vision, and drive, and they have goals and dreams and aspirations that inspire me, too. Generally speaking these people have decades of life experience, and have done many things along the path to where they are today. This week, though, I sat down with a young man who amazed me - and what is perhaps most astonishing is that he is but ten years old, and has decades of life still ahead of him, not behind him. And yet I think this young man could teach many adults a number of things about responsibility, about vision, about passion, and about belief. His name is Nathaniel Crossley, and I think it's a name you should get to know, Fort Mac, because I think it's a name you are going to start to hear a lot.

Now, you might have heard of Blake Crossley, Nathaniel's dad, because Blake is an interesting guy who has done some very interesting things, most of them involving charitable causes. Blake is a pretty well known name around our community, but I'm not going to talk about Blake today. I'm going to talk about Nathaniel, a boy who at age ten has done more than many adults, and who has a new cause at the moment - raising money to build a well in Africa.

When you meet Nathaniel he seems like a pretty normal ten-year old kid - some shyness, a degree of frenetic energy that appears just barely contained, and a lovely little grin. When you begin to talk to him, though, to ask him questions, he opens up and shares some very interesting observations on the world. I asked him why he wanted to raise money for a well in Africa - why this mattered to him, a kid thousands of miles away from a country he has never seen - and he said "so that kids like me can have good drinking water too". He's a very young man who has figured out something that some people decades older never will - that we who have so much have a responsibility to those who have far less. And he has also figured out that one person - even one ten year old - has that responsibility, too.

Nathaniel has already done many other fascinating things, like meeting Bono after he started a Facebook Page called "Bono I Got Your Back" after Bono's injury some time ago. He is an "inspirational ambassador" for a group called "Impossible 2 Possible", founded by Ray Zahab (click on this link and scroll down to see Nathaniel - and then take note of the other people who are his peers as ambassadors - like I said, people, I am blown away by this young man). And now Nathaniel has embarked on this project to raise money to build a well in Tanzania-Malawi, a place he has never been (but he told me that he would like to visit when the well is completed, and I'm betting he will get there, too).

Nathaniel is a lot of other things, too. He is a huge U2 fan, and I think what truly gave me some credibility with him was sharing that I too love U2, and have even seen Bono's house in Dublin (well, not the house really, but I saw his fencing and shrubbery that surround it!).  He is a Lego genius, apparently loving to build impressive projects from Lego pieces, like this: 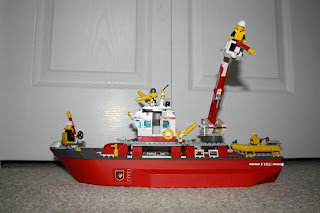 Photo credit to Nathaniel Crossley
And he is interested in science, showing me his upcoming science fair project, and his award-winning project from last year. We discussed our mutual interest in TV shows like "Mythbusters" and "How It's Made", and after we chatted for a bit about his interest in building things I told him I think he's a creative genius - and his smile was absolutely infectious. He plans to build a model of the well in Africa to show people how it would work, and he launched into an explanation of how he would build it using a fish tank and PVC piping and various other bits and pieces, leaving me with my jaw on the table since I couldn't build a model well if someone gave me a kit, instructions, and a professional engineer to assist me. Nathaniel isn't just a creative genius I suspect he is an engineer of some sort in the making (although he professed interest in being an airplane pilot, which led to a discussion of building jets, or jet engines, or aircraft to travel into space - I'm telling you, this kid has plans, people).

I think one of the other things Nathaniel has is faith, and he has some wisdom. I asked him why he thinks more adults don't get involved in charitable causes, doing fundraising and taking on such projects, and he said he thinks it is because some adults just don't care. And, sadly, he's right. Some adults become so immersed in their own lives that they stop caring about those of others, and certainly about those who live entire continents away in places they will never see. But Nathaniel cares, and he has the faith and belief that there are others out there who care, too.

So, Nathaniel wants to raise money to build a well in Africa. How is he doing this? Well, through direct donations to Africare, for starters, but he is also selling T-shirts ($30, many colours and sizes available!). His goal is a very reasonable $2000-$5000, a goal that I think is not only attainable but also surpassable. I think Nathaniel could raise a good deal more - and people, we can help him to do it. 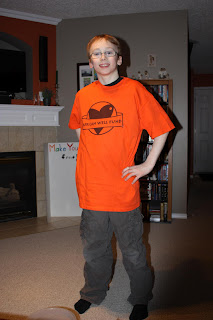 Photo credit to Nathaniel Crossley
Perhaps you are asking why you should donate, or buy a T-shirt. I can think of two very good reasons. One is that it is meeting our responsibility to those in the world who don't have the luxury of clean drinking water, to those who live in conditions we can't even imagine and who would be astonished by how we take for granted the clean, clear water that runs right into our homes. And the second is that there is a young man in our community who believes in us, and who believes in dreams and goals and passion and vision - and I'll be damned if we let him down. We can help Nathaniel reach his goal, and we can show him that this community supports not only him but the world beyond us, too. We can be inspired by him, and inspire him in return. We can let a ten year old boy lead us, and we can learn that leadership doesn't have to come from government or industry - it can come from a charming child who believes that one person can change the world.

And mark my words now, people. Nathaniel Crossley, Lego master, science enthusiast, creative genius, fundraiser, and ten year old boy, will change the world. I told his father Blake to prepare to be eclipsed by his son, because I think Nathaniel will accomplish and achieve far greater things than most of us ever do or will (and really, I think we all want our children to eclipse us, to be better and greater than we ever could be). I believe in Nathaniel, I believe in his cause, and I am now going to ask my readers to believe, too - and to act. I don't ask for much, people, but on this occasion I am going to suggest - no, I'm going to outright ask - that you head to the link below and donate to Africare. I don't care how much you donate. Just donate something, and then feel good about it, because you have not only contributed to that well in Africa - you have strengthened and enriched the faith, belief, vision, and passion of one child in our community. As the famous quote says "And a little child shall lead them" - and I would follow young Nathaniel Crossley anywhere, because at the age of ten he is already a leader worthy of following. I hope you will follow him too, Fort Mac.


Please click here to visit Africare
and in the comments section
of the donations form indicate
that it is for "Nathaniel's Well"
with the Tanzania-Malawi project.
And...
THANK YOU! :)
at February 03, 2012