And Then I Got Down - With John Mann at winterPLAY

Yesterday I wrote about the Intrepid Junior Bloggers, the band Down With Webster, and their encounter with them this past weekend. I'll admit I'm a DWW fan, but that whole thing - the concert, the meet and greet - was really for the Junior Bloggers. Last night, though, I did something for myself. I went to the Suncor Energy Centre for the Performing Arts for the latest event at winterPLAY and saw two other Canadian musicians, one relatively new and one a true icon (and someone who has intrigued me for many years). DWW was for the girls - but Steve Bowers and John Mann were just for me, people.

I've been a fan of John Mann for decades. It was literally decades ago when he first appeared as the front man for Spirit of the West. SOTW provided the soundtrack for much of my young adult life, and I have been a fan for all that time. And yes, for many years I did harbour a tiny crush on John, too, with his lovely soulful voice and manic dance moves. Two years ago when Spirit of the West played interPLAY I had the chance to see them live after many years (I had never seen them live before, always just missing their gigs), and meet John. When I heard he was coming back to Fort Mac as part of winterPLAY but as a solo performer I knew I had to go, as I had long suspected a few things about John and wanted to see if I was right.

When I arrived last night I was delighted to see the theatre had been set up as a "nightclub", round tables scattered around the room, a small bar off to the side, and a small stage. I love big concerts, don't get me wrong, but these small intimate performances are truly what make me happy. They are the way you actually get to know the soul of an artist, to see who they are and what makes them tick. I had high hopes for last night - and I was not disappointed. 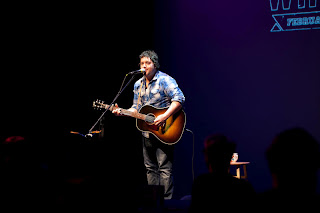 Steven Bowers, photo credit to Events Wood Buffalo
Opening for John was Steven Bowers, a musician I had not heard of previously but that I think deserves much more notice. Steven is from Newfoundland, and is a singer/songwriter of the very best sort - the sort that follows his own path. He seems like a genuinely humble young man, quiet and reserved, and yet you get the sense that something is simmering under the surface. When he sings all that simmering comes to a slow boil, and you find songs that are soft and gentle and lovely and beautiful. The lyrics are charming, the music is stirring, and the combination is such that you feel you are in the presence of someone who brings authenticity and sincerity to his art. The music is folksy in nature, east coast inspired perhaps, but with a far wider range than simply being from one region. Steven Bowers sings not of the east coast experience but of the human experience, and every song resonated with me. At the end of the evening he kindly gave me one of his CDs, which I can guarantee will enter my playlist on heavy rotation as I mull over those lyrics (the music is wonderful too, of course, but as a writer it's the lyrics that pull me in, keep me coming back, and tattoo themselves onto my brain). 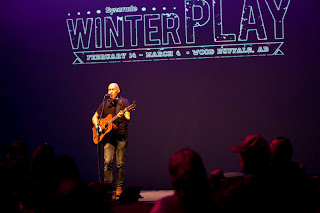 John Mann, photo credit to Events Wood Buffalo
When Steven finished it was time for John Mann to take the stage, and so he did, just him and his guitar. When I said I suspected a few things about John I meant it. I suspected he was deeply intelligent, with a wry sense of humour, a deft way with words, and a soul as big as the twilight sky when it dances with the northern lights. I do so love being proven right, and last night John proved me right and then some. He played several songs, including some of those Spirit of the West songs that have long been favourites of mine (like "Political", "And If Venice is Sinking", and "Save This House"). What was lovely about those songs was hearing the stories behind them - the doomed relationship that inspired "Political", the honeymoon photograph behind "And If Venice is Sinking", and the CBC live-songwriting challenge that led to "Save This House" (and John, about that last one - I'm not sure if you and Geoffrey were assholes or not, but if you were I'd add the word "clever" in front of assholes!). Hearing those classic SOTW songs was incredible, and to hear them sung by John while he played his guitar was magical for me, a fan for so many years. In the end, though, I think it was his other songs that really touched me. You see, John was diagnosed with cancer two years ago, and as creative people do when confronted with something troubling he worked it out through his art, writing songs as he went through the experience of a cancer diagnosis and treatment.

He calls these songs his "cancer anthems", and he wondered if the world is ready for them. I would answer that yes, the world is not only ready but in need of such songs, since this is such a common experience for so many. John told many stories about his cancer journey, and one comment in particular caught me. He spoke about how his favourite moments, his most remembered moments, were the ones where there was laughter. Now, you might not think hospital rooms and oncology wards are exactly the greatest spots for humour, and yet I think that is the place it is most needed, too. And now I will get personal for a moment again so you understand why John's words struck me.

The last few weeks of my dad's life were spent in palliative care in a hospital. I come from a large family, several sisters and their husbands and their children, and, honestly, when we get together we have a tendency to get loud. It tends to take on a party atmosphere wherever we happen to be, and I, being the youngest, often take on the role of family clown. In the final days of my dad's life we would often pack into his room - and we would tell stories, and we would laugh. Sometimes my dad would sleep through it all, and sometimes he would smile along, too weak for much laughter. After one of these sessions, when I realized our raucous laughter could be heard down the halls, I went to the nursing station and told the nurse I hoped we weren't disturbing anyone. I'll never forget her reply. She told me that palliative wards see a lot of things, like tears and regrets and sorrow and pain and suffering. She told me that the one thing they never saw enough of was laughter, and that the laughter of my family made more than just my family smile. She not only reassured me that it was okay, she encouraged me to keep laughing - and we did, almost right to the very end.

And that is what I saw in John Mann last night, too. He's a man who can see the humour in the bleakest situations. He can take a cancer diagnosis and turn it into a series of lovely songs, songs that brought me close to tears as I thought of my father's cancer journey. John sang, too, of his love for his wife and his daughter, and he told stories of their family life, providing a glimpse into the private life behind all those iconic songs he produced over the years (and I will tell you this - writers of any sort, be it songs or books or blogs, are deriving their inspiration somewhere, and often from those closest to them).

At the end of his set John helpfully explained what would happen next - he'd leave the stage, we'd go nuts, and he would come back and do a two-song encore. It's rather nice to just have a performer say "look, we all know the routine, so let's just do this, shall we?" instead of that coy "oh, I'm so reluctant to but if you REALLY want me to I'll do an encore". Again it was an example of that sly sense of humour John harbours, and it delighted the crowd.

John finished with a rousing acoustic version of "Home for a Rest", a song that was sort of my anthem during a trip to England and Ireland last year when my liver wondered why I'd suddenly taken up excessive alcohol consumption (look, when in Rome...), and then, sans guitar, he sang a Robbie Burns poem - and that was that.

Look, people, it was a small crowd last night, and I wish more had been there to experience what I did. It  was like I saw both ends of the Canadian musical spectrum in a matter of days, from Down With Webster rock on Saturday to Steven Bowers' gentle songs and John Mann's heartfelt performance last night. Each experience moved me in a different way, too, with DWW making me dance, Steven Bowers making me reflect and think, and John Mann taking me on a journey that for me began years ago when I began listening to Spirit of the West. Decades ago when John first began with SOTW my dad was still alive, and John's life hadn't been touched by cancer. I spoke to John last night after the show, and found him still to be the handsome, charming man I'd always thought he was. We have both aged over the years, and our lives have changed. He pursued his life with his family and making music, and his music was the soundtrack for many of the things I've done, a touchstone in my life for many, many years. So, even though he and I are strangers our lives intertwined through his music, and last night was quite magical as the man and the music and I were in the same room, and I got to hear the stories behind the songs. It was another amazing experience for me, right here in Fort Mac, right here in the place that has become my home like no other place ever has. I was reminded once again of what an incredible place this world is - and of what an amazing place my community is, too.

I walked out of theatre into freshly fallen snow, got into my car, and hit play on my iPod - and on came Spirit of the West "Save This House". Perfection, people. Perfection.


My sincere thanks to the folks at
Events Wood Buffalo
for another great winterPLAY event,
to Steven Bowers for the music and the CD
and to John Mann -
for all the music over all these years.
at February 22, 2012