And Then Ian Hill Totally Stole The Show.....

I'm going to be very honest about the recent Leading the North conference in Fort McMurray. I had a terrific three days, and there were some phenomenal presentations and incredible moments - but the best part of the conference, the moments most unforgettable, had to be those spent in the company of Ian Hill, venture capitalist, philanthropist, and "business guy". I wrote already about Ian's opening keynote address, which brought me to tears. Today I will tell you about his presentation on the final day of the conference, and how he completely stole the show from anyone who came before or after.

The presentation was titled "Leadership and Community Development in Northern Alberta". Now, that's a pretty dry title, but after having seen Ian burn up the stage once already I knew that the title was deceiving and that Ian's talk would be anything but dry - and I was quite right.

Ian has a way of speaking that pretty much cuts right to the core, both of the subject matter and of you personally. He has a way that makes it feel like he is speaking directly to you, which is perhaps why he is such an incredibly successful speaker - because once you've seen Ian Hill speak you won't forget it, and I can pretty much guarantee that.

Ian covers a lot of territory when he speaks, but his topic this time was one that interests me deeply - community. And he had some very interesting things to say about community, about creating and growing a community - and about us, Fort Mac.

Ian spoke about how we have become a prosumer society - not just consumers but producers and consumers at the same time. He said this : "If you always do what you've always done you'll always get what you've always got". Think about that for a moment - if we never change anything, we will never see change. If we never try anything new, we will never see anything new. If we always stick to the status quo we will always have...the status quo. And people - that's not good enough for this community.

Ian talked about becoming an "agent of change" - about how we can all participate in making this community a "beacon of hope" for the rest of the world. He talked about how each of us - every single one of us, really - is looking for a leader, but that instead of searching perhaps we should be that leader.

We need to think about some things along the way, of course, like what our vision is and where we want to take this community. We need to assess where we are at today, and what attitudes we need to adopt to get to where we want to be. And we need to do one very important thing, a thing Ian mentioned that has stuck with me ever since he said it. We need to engage in some "courageous conversations".

Courageous conversations are those that we don't always want to have but that need to be explored. Ian was speaking on a community level but I think this is true also professionally and personally. These conversations are designed to get to the truth of what is going on, not what we want or wish to it to be. These require a high degree of maturity to engage in - and they may well expose our own flaws and foibles. Through courageous conversations, however, we can effect change. We can reveal the truth, and when the truth is revealed we can discover where it leads us.

Ian asked some questions, too, questions spinning in my head for over a week now, questions like:

Why am I here?
Are we leading the way we need today?
Do you have to be "sick" to get "better"?
Why are people apathetic?

The answer to that last question, about apathy, was answered by Ian and I happen to agree with his assessment. Apathy arises when people think that what they say and do will not make a difference. Apathy is reactionary to a belief that one person cannot effect change. And that's when Ian hit us with this stellar quote, from someone who knew adversity - Helen Keller: 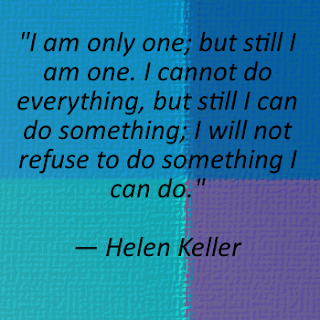 And in the end that is what it all comes down to, people. You may be one - but you are still one. And you can effect change. One person can change their lives, change their community, and maybe even change the world. It is belief in the power of one that counters that insidious apathy in our world.
Towards the end of his presentation Ian asked each person in attendance at the conference to make a commitment to him, a commitment of something they could do for this community. Later that evening, after the conference ended, I had the chance to have supper with Ian, and I told him of my personal commitment - a commitment to look at using this blog to explore some of those desperately needed courageous conversations. For many months now I have been an observer, and I will continue to be - but I hope in the future to be the catalyst and convener of some of those conversations, and I hope you will join me in them, Fort Mac. That is the commitment I made to Ian - and myself.
At the end of Ian's presentation I realized I was close to tears again, simply because he had once again inspired, captivated, and amazed me. I happened to be seated very close to where he was speaking, not up on the stage but down on the floor in the audience (Ian tends to wander into the audience when he speaks, very effective in engaging you). When Ian came close to me I saw his face was damp, and I thought he had worked up quite a sweat while speaking - and then I realized there were tears rolling down his face, not sweat. Ian Hill, venture capitalist, philanthropist, "business guy", and, in my eyes, hero, was crying, too. And that is when I came to fully believe in his sincerity, his authenticity, and his genuine belief in all he says. Ian Hill is not "just" a motivational speaker - he's the kind of person who makes you believe you can do more, be more, accomplish more, and explore more than you ever believed you could. And in that way Ian Hill stole the show - and my heart.
I am including these tweets,
which I sent as Ian Hill was speaking.
I think they are worth sharing here, too.
I think they show the impact he had on me -
and I believe on everyone in that room that day.