The Future of MacDonald Island Park - and the RMWB 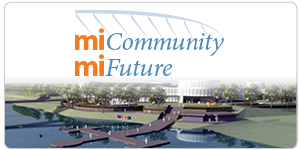 I wrote recently about the RMWB's plan to revitalize and develop the city centre, and my excitement over that plan. One of the things that thrilled me most, though, was not the plan itself but the desire to engage the community in developing it. I recall when I was a child in Saskatoon, and the neighbourhood we lived in was deemed in need of a community centre. City hall granted the funds, the community centre was built as they specified, and it was a done deal. Community input? Zero. Community suggestions? Not welcome. The community got what was offered and built, and, frankly, that was the end of the discussion.

Well, people, how times have changed - and for the better. This week I attended the community engagement meeting for another development on the horizon - MacDonald Island Park. Now, I have lived here since before MI went through it's last development phase, and knew it when it was a much smaller facility. I watched the last development with delight (despite some of the agonizing woes it went through, which, to be honest, are true of any construction project). I was delighted to see Tim Reid, MI Chief Operating Officer, outline the latest concepts for the next phase - and to see how much community input has gone into it.

The process began with the MI board of directors requesting a plan for development of the island space, but with one requirement - the input of community members was essential. The plan needed to co-ordinate with the RMWB and their City Centre Action Plan (CCAP) and Municipal Development Plan (MDP - play along, people, I live in a world of acronyms these days). Most of all, though, this was not a plan that would linger on a shelf gathering dust - it was to deliver results. It wasn't to be a "we could do this" or "in the distant future we might do this" - it was to be a "this is our future, and we are going to do this now" plan.

The objectives of the plan are to develop a world-class facility in the midst of a liveable city centre. It is to be a community-led project, with residents being asked and encouraged to help to determine what the facility should encompass. It is to be a facility to meet the needs of today, and tomorrow, which thrills me as I believe we have been prone to short-sighted thinking in this area, and not looking far enough into the future. We have played "catch-up" for a very long time, been behind the game - and it's time to be pro-active.

So, MI engaged the community. They did community interviews and public meetings. They worked with the people from CCAP and MDP. They presented their ideas and asked for suggestions from interest groups and non-profit organizations. They are now in the process of engaging the community even further through the use of the MI Community MI Future website, where you can view the plans and, more importantly, leave comments. There are also interactive screens set up at MI where you can do the same thing but while being surrounded by the current MI facility.

The result thus far? Astonishing - and wonderful, in my opinion. A place that incorporates walking trails and outdoor performance areas (with the space for 20,000 spectators), stadiums for baseball and softball, an art gallery, and, most importantly, a "shared space" facility designed to host some of our local non-profit groups, allowing them a central hub for their operations. And there is so much more, people, like restaurants, splash parks and climbing walls, and, eventually, perhaps, a rowing club facility on our own little marina. The link to the city centre? A pedestrian bridge across the Snye that will link the revitalized downtown core to our world-class arts, culture, sports, and recreation facility.

The goal is to create a vibrant community in our city core, a place of home and belonging, a place where we can work and play together, and a place with economic resilience. The architectural designs are beautiful, built on a concept of waves (waves are always moving into the future, ceaseless and powerful) and circles (circles are synonymous with community and inclusion, and have signified gathering places since humans formed circles around fires in caves). There is a great deal of glass on the enclosed areas of the building, which I think is spectacular as it allows you to see our beautiful natural surroundings, and brings a bit of that outdoors inside for all to enjoy.

Is there a cost? Of course there is, people. The figure quoted, as the design is presented currently, is $55 million. That seems like an incredible amount, but here are some other figures : 250,000, which is our projected population by 2030. 85%, which is the percentage of those that will live in the city of Fort McMurray itself. 22%, which is the percentage that will live and/or work in the downtown core. When you look at those population numbers that $55 million starts to seem pretty reasonable in order to have a facility that can truly address the needs of that population.

People, we have been cautious for a very long time in this city. We have taken baby steps, and we have always been behind the game, building only after a demand had been created and thus dealing with a lack of facilities and infrastructure. We now have a bold mayor and city council who are willing and able to address the future that is staring us in the eyes, and we have a community that is experiencing a resurgence and revitalization of it's own. I grew up in Saskatoon, a city that has become known as "the Paris of the Prairies". Why shouldn't we (and why couldn't we?) become known as the "New York of the North"? We can embrace our future, prepare for it, and anticipate it - a far better tactic than waiting for it to sneak up on us and then be blindsided by it.

So, you know my opinion - but the process isn't over. MacDonald Island Park is still seeking community input and engagement. Visit this website, look at the plans, and have your say. Go to MI and check it out on the big screens, and when you see the comments box put down what you think. I left my comments there today. I said this: "A bold visionary plan that excites, and makes me hopeful for our status as a world-class city. Be bold, be unafraid, be leaders, and help the RMWB take us into the future!" What do you have to say, Fort Mac? Be sure to be heard - and be part of the future, both of MI, and of the RMWB. A city isn't buildings and bridges - it is the people in it, and the community they build. Let's build a great one, shall we?
at September 29, 2011