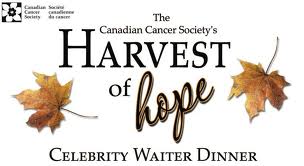 There is no shortage of fundraising galas in this city. For most of my years here, pre-occupied with my primary job of raising my daughter, I have not attended many of these, but this year I decided to take in as many as humanly possible. Why? Both because of this blog, and because of a desire to more fully integrate into this community, to see the spirit and the courage and the possibilities. Last night I attended the Canadian Cancer Society's Harvest of Hope at the Sawridge Inn - and people, all I can truly say is "oh, what a night!".

The Harvest of Hope is based on the idea of having celebrity waiters work the event - local figures of note, like politicians, realtors, etc - and have these waiters compete to raise money for the Cancer Society. When I heard about the dinner this year I was intrigued, but there were two problems : I didn't have anyone to go with, as my husband was away at a conference, and tickets were sold out. I have a philosophy though, which is basically that in life you can regret not trying or you can try anyway and live without regrets, so I put out the call on Twitter. I tweeted "Any tickets for Harvest of Hope?" and waited for the reply. It came quickly, and from none other than our local mayor, Melissa Blake, who tweeted that she had heard that Ruth Francoeur from the HUB had tickets, and suggested I contact her. I sent Ruth a message, and told her I needed one ticket - because I would go solo. As it turned out I didn't go alone, people. I took my dad with me last night, and he didn't even need a ticket. You see, my dad died of lung cancer just over 5 years ago, and while he is in my thoughts most days last night this was especially true, as every time I felt awkward or out of place I thought of him there with me - and he would have loved every minute of it, too.

I'd like to say the dinner is "controlled chaos", but that would suggest some element of control that just isn't there. I knew things would be interesting when shortly after I arrived I discovered I would need to pay Ruth (the server at our table) for my cutlery (this is done through the use of "funny money", which is used as the currency for the event although real cash is welcome, too). The other people at my table were all from the HUB, and I don't know if I've ever met a nicer, more welcoming group. It turned out I knew one of the women (and her young adult daughter) from one of my daughter's sports activities, so I had someone to chat with right away (and the young adult daughter and I quickly discovered we had common interests in men in uniform, writing, and generally having a good time). Even if I hadn't known them, though, I think it would have been quite fine as the folks from the HUB seem to have this ability to make you feel like you belong (which is quite likely why the HUB is one of the most popular spots in this town for young parents and children alike).

I'd been told to bring cash, and a lot of it, so I did. I purchased my funny money, and sat back to be entertained. To say I was "not disappointed" is the understatement of the year, as it was clear from the moment the celebrity waiters paraded in and were forced to Zumba until someone paid to stop the music that things were going to get crazy. I learned very quickly that these waiters are ruthless in their attempts to outdo each other to become "top waiter", as a waiter from a different table came around trying to sell us napkins (Ruth chased him off pretty promptly, and I'd suggest you don't mess with Ruth from the HUB, folks). Things got nuttier and nuttier, too. I paid  celebrity waiter (and councillor) Russell Thomas $20 for being the first follower of this blog, and a huge encouragement to me in this adventure. I paid $20 to waiter/councillor Don Scott for being the person who convinces me to attend all these events (and often inviting me to attend, too). I paid $40 to see Don and fellow waiter/councillor Phil Meagher waltz, and it just might have been the best $40 I've ever spent in Fort Mac (I won't even describe the inappropriate touching that went on there but I will say I'm not sure I will ever look at these two quite the same way during council meetings). I watched as all these local people of note "let loose" and just showed what good sports they all are.

As for our poor waiter Ruth - well, by the end of the evening she was wearing clown shoes, a red clown nose, a clown wig, and had a fake baby in a baby carrier strapped to her back. She told me she had feathers in her armpits and silly string in her underwear (as she quipped "a sure sign of a good night!"). She served our food, got us drinks from the bar, barked like a dog, and did all the other ridiculous things we asked of her with good humour and great enthusiasm.

I suppose for me the crowning moment was when a celebrity waiter announced what she would do if the room raised $7000. She would shave her head. I was, quite frankly, thunderstruck. I'm not really tremendously vain but I'm not sure there IS enough money to convince me to shave my head. I watched with fascination as the donations poured in, and suddenly, there it was - $7000 had been raised, a chair was brought onto the dance floor, and out came a hairstylist and the clippers. Right there, in the Sawridge ballroom, the bravest woman in this city, Fiona Deeney-Paradis, shaved her head to raise money for cancer research and support. I was front and centre, taking it all in, and all I can say is that while Fiona was beautiful before she looked even more amazing after. She had this glow about her after that, as she and her shaved head walked around the room as she attended to her table. I tracked her down, handed her $50, and told her that she is the bravest woman in this city. I suspect she would argue this and say that it is instead those who battle cancer who are bravest, and she is probably right, but last night, for that moment on the dance floor, she was the bravest person in my universe, people. I hope she woke up this morning feeling glorious, because just thinking about her makes me believe I too can do anything (thanks, Fiona!).

The food was great, of course, and local radio guys Ben McCully and Jerry Neville did a terrific job as Masters of Ceremonies. Ross Jacobs acted as the auctioneer for the live auction and managed to make people cough up lots of cash for some pretty spectacular items (sailing trips, and helicopter tours, for example). The night ended with dancing and music, although I didn't stay for much of that. I was, quite honestly, a bit worn out from a busy day and the all the frantic activity of the evening (I can't even imagine how tired the poor celebrity waiters, who had been jumping through hoops all night, must have felt). I'd seen celebrity waiters sing, dance, and get crazy. I'd seen them wear everything from devil wings to chef hats to a barrister's wig. I'd seen people get silly for a cause, and raise a lot of cash.

How much cash? I went on to Twitter this morning, and an unofficial report I saw said it was $273,000. I'm not sure about you, but I'm staggered by that amount. But it seems about right, too, as I know I gave freely and happily last night. I bought tickets for draws for an iPad 2, Oilers game tickets, and things I don't even remember (didn't win a single thing, and didn't care, either). I came home with a pin from a local RCMP officer/waiter (I'd paid $10 for it, and it has special meaning as the RCMP have become one of my interests in the course of writing this blog), a pass to a zumba class ($20, and I warned the nice zumba lady that I am totally uncoordinated - I didn't tell her that having me in her class will likely be much like having a bowling ball in a room full of dominoes, but she will find out soon enough), enough money for taxi fare, and *maybe* a cup of coffee. I also came home with memories, feelings of joy, and a sense of the strength of our community.

So, to my thanks. Thank you to Ruth Francoeur, for selling me that ticket, and making me feel so welcome last night. Thanks to the folks from the HUB, who took in this local stray and made her feel like a part of their group. Thanks to all the celebrity waiters who put aside any reservations, got crazy, and raised an equally crazy and astonishing amount of money. Thanks to all those who organized the event, the Sawridge for the food and staffing, and everyone else who made it happen. Thanks to all those who attended and who I saw give so freely and so generously, their hearts (and wallets) wide open. Finally, thanks to my dad, who was my date last night in spirit even if he couldn't be there in person. I could sense his presence beside me all night, and with him I saw our community laugh and sing and dance and celebrate...and hope. Because in the end, people, it's all about hope, and we harvested a whole lot of hope last night.
at September 18, 2011