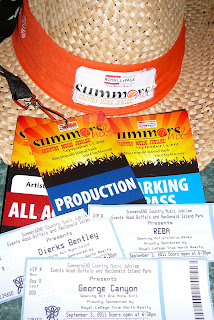 Well, SummersEnd day two seemed to dawn extra early. I'd been out late the night before, working backstage with Jennifer from Events Wood Buffalo, MacDonald Island, other volunteers, the performing artists and their camps. Alas, Friday morning still required an early get-up as I had kids I needed to get to school.

I arrived at MacDonald Island for my shift and found yet another blur of activity. It turned out that while the hospitality rooms were ready there was need for a driver, and I discovered myself holding the keys to both a 15-passenger van and a huge black Ford Expedition (which I thereafter dubbed "the superstar car"). My day had begun, and it looked like while I would still be filling ice buckets I'd also be doing a lot of airport and hotel runs.

Once again I can't divulge many details of conversations I had with the artists as this is their private time, not public, and I was there as a volunteer, not a writer. What I can and will say is this - I had the great pleasure to drive Ryan Laird and his band/crew around, and they are a terrific bunch of young men. Friendly, grateful, kind, and so excited when we entered MacDonald Island and they spotted a bear beside the road. I told them I'd had the bear specially arranged for them, of course, as I'd guessed they'd like to see one. I'm a big fan of Ryan's, people - he's a talented young man, and I think he has a bright future. Country may not be my musical genre but I sincerely hope he does very well as anyone that great deserves equally great success. His bandmates and support crew were also amazing, and I became fond of each of them. You know you've connected with someone when you have in-jokes, and we had a couple of running jokes that went all day (as well as discovering some personal connections in people we knew in other cities).

I also had the pleasure of picking up a couple of George Canyon's band-mates and support crew from the airport. The minute I met them I knew that I would probably like George, too, because if he chose to surround himself with people like this it was a good sign. It turned out that I knew one of them from a very long time ago when we were both teenagers (and young ones at that), and so the world seemed even a bit smaller and closer.

The day was a blur of airport and hotel runs, ice buckets and meat trays. Later that night, when Dierks Bentley took the stage, Jennifer once again came to me and a fellow volunteer with VIP tickets to catch some of the show. This time, though, we needed to stop at a couple of other places, so the three of us piled into a golf cart and off we went. Just some advice, people - if you ever run into Jennifer when she is driving a golf cart, I suggest getting out of the way. She is polite, but determined, and we sped (well, as fast as one of those putters go) through the fairgrounds on our rounds, until we finally arrived at the stage.

We went off into the crowd again, and I was delighted to see all the people just loving Dierks and his band. I saw many, many young Fort Mac women in the crowd, and knew that quite likely every single one had a deep crush on Mr. Bentley as he is a handsome young man. Dierks puts on a great show, and I saw people dancing and singing and just generally having a grand old time.

My evening ended rather late again, with a few runs to the hotel to drop off some tired musicians and crews for some well-deserved rest. I was so overwhelmed with the need to tell someone about all that I had done that I texted a friend to ask if he would like a late (very late!) dinner with me so I could just spill it all, and so I was out far later than I intended. I was just so infused with enthusiasm for all I had done and seen that I just had to share it with someone. My friend kindly listened while I went on and on, doubtless bored to tears but indulging me as only good friends will do.

What I learned on day two was that day one was relatively easy. By day two people are starting to grow a bit weary, but you can't slow down. You just keep going and doing and solving and plate-spinning, like Jennifer (who by this time had acquired the nickname "plate-spinner extraordinaire" in my mind). Day one you were fresh and rested and things were prepared - day two was when you had to remain at the top of your game no matter how late day one had gone, and no matter what happened. The folks at EWB and MacDonald Island are masters at this, and I learned so much from them.

By the end of day two I knew that I had no idea what to expect on day three, and found myself actually relishing the prospect. The thrill of it all was never knowing what was going to come up, and just dealing with it as it did. I was looking forward to day three with great anticipation - but I never expected it would be as wonderful as it was. And this, people, is why you might want to come back to read about day three tomorrow!


Ryan Laird - "You've Had Me All Along"
filmed at SummersEnd, Fort McMurray
at September 08, 2011