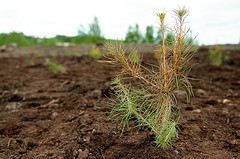 Photo credit to Suncor Energy
This post is a bit of a departure for me, people. I don't typically write about the oil sands or the environment, but not because they don't matter to me. It's more because I leave the writing about those things to other people who know them better, who understand them more, and who can speak to them through their direct experience. Yesterday, though, I was invited to attend a very special event, and as Suncor was gracious enough extend an invitation to this blogger (and decidedly non-traditional media type) I decided it was truly worth telling the story. In fact, this story is worthy on many levels, since it is a positive and optimistic story about reclamation.

One year ago Suncor made history when they unveiled Wapisiw Lookout, or, as it was formerly known, Pond One. Pond One is the first oil sands tailings pond to be reclaimed - ever. Now, this may not seem significant, but it's absolutely huge when one considers how long some of these ponds have been around - over 40 years. That puts this into some perspective, I think. Yesterday, though, as Suncor celebrated the first anniversary of Wapisiw Lookout they also celebrated another milestone - the planting of the 5 millionth tree. Suncor planted their 3 millionth tree in 2004 - and that was from when they began in 1974. So, in those three decades 3 million trees were planted - and since 2004, in 7 years, they have planted 2 million trees. This shows the acceleration of the reclamation process, and I think a true commitment on their part to mitigating their environmental impact.

The bus out to Wapisiw Lookout is an interesting ride. You travel through the boreal forest lining highway 63, you go through the security gate, and then you see the industrial side of the oil sands process. But then, suddenly, you find yourselves driving through a quiet little spot of grasses and trees, a place with a wetland and birds wheeling overhead. You are at Wapisiw Lookout, and the industrial side seems to recede as it is replaced with this bit of nature in it's midst. 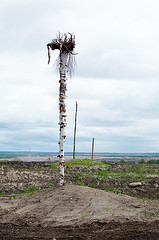 Photo credit to Suncor Energy
There is a lookout point built in the centre of the old tailings pond, and from it you can see the vast expanse of trees and barley. It was close to this spot that local dignitaries Melissa Blake and Guy Boutilier joined Ivy Wigmore and Suncor executives to plant the 5 millionth tree. Elders from local First Nations groups were in attendance, as were members of the media and some Suncor staff. It was a quiet event, the silence broken only by the sound of shovels as trees were lowered into the ground.

After the tree was planted I headed over to the lookout to see what was going on. I'd been told that several black bears have taken up residence here, but I imagine the arrival of the bus had likely scared them off. Probably the same was true of the deer that can be found here, and who moved in shortly after the reclamation of the tailings pond was complete. The life I noticed seemed to be swarms of blackflies, some bird droppings, and, finally, a bird of prey, wheeling over the field as it hunted. Now, some might have been bothered by the flies and the droppings, but to me it seemed such a hopeful sign - because it meant that life had returned to this pond, life in all it's forms. Tailings ponds are dead places, where nothing lives or grows, and yet here at Wapisiw Lookout there are trees and rat root (a plant much valued by First Nations peoples), birds and bears, toads and flies. This is a place where life has begun to breathe again, where the natural world has begun to creep back in, coaxed and encouraged by those Suncor employees who share a passionate commitment to make it happen. 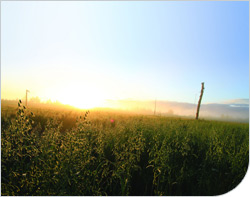 So, yesterday I saw a tree being planted, and I saw a site that has been turned from one of those infamous tailings ponds into a beautiful little spot in the middle of an industrial site. I saw birds flying over that spot, and I saw signs of life everywhere I looked. I saw a passion, commitment, and desire to preserve the environment while balancing that with our world's need for oil. I saw a company celebrate another milestone, and achieve another goal. I saw hope, people, and I saw a reason for our entire community to celebrate a positive achievement attained by one of our local employers. So, while I may not write often about the oil sands, and while my commitment has been (and will remain to be) writing about our community, I saw how this landmark of a 5 millionth tree had implications for all of us in Fort Mac, and how it was yet another way to tell our story to the world. In that one little tree, that 5 millionth seedling, lies the hope and commitment and passion of an entire company, and, to be honest, of our entire community. I thank Suncor for inviting me to be a witness to it, and for allowing me to share in this event. I look forward to the planting of the 10 millionth tree, and to the reclamation of all the other tailings ponds that will one day follow Pond One and become alive again.


The Creation of Wapisiw Lookout
at September 24, 2011