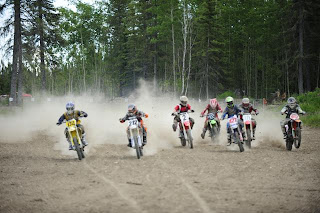 All photo credits for this post go to Kathy Schneider (Fleeting Moments Photography).
People, when I began writing this blog I knew I would need to expand my horizons a bit and explore some aspects of life in the city that I'd never considered before. One of these aspects was some of the sports activities in the city, and since I'm not really a sporting-type (I know, I know, not a fan of Tim's, country music, or sports - how did I end up here again?!?) I knew I had a lot to learn. Last weekend I embraced the new-to-me and headed out to the racetrack run by the McMurray Dirt Riders Association. Here's what I knew about motocross prior to Saturday afternoon : nothing. Here's what I love about motocross after Saturday : everything! 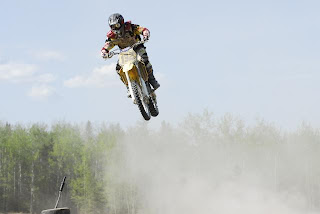 When I arrived at the track I admit my first thought was "is that smell in the air gasoline or testosterone?". Motocross here appears to be mostly dominated by men and boys, and I imagine that may be true of the sport in general. I had arrived in time to eavesdrop on the riders' meeting, and was able to listen to a few of the rules and regulations. And then, people, it was race time. 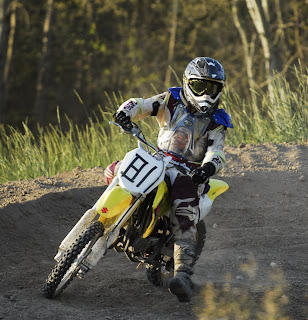 When the first set of bikes hit the track I knew this was not going to be my ordinary Saturday afternoon. Here again are a group of people that are passionate about their sport. I discovered over the course of the day that the track, which is quite impressive in size and quality, is totally built and maintained by volunteers. The races are also operated by volunteers, from flagmen to announcers. Now, I've been involved in a few groups in this city and I know how tough it can be to run a group based solely on volunteers. And yet MDRA has done it - because these people love this sport. 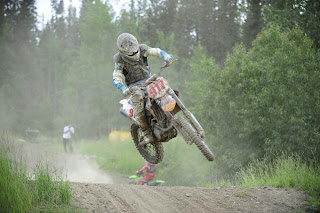 I loved watching the races, and particularly the intermediate category. The energy, intensity, and passion is something you can feel right into your bones. I loved watching as they took the jumps, adding a little twist of the handlebars at the apex so the back end of the bike "whips" out. There was a pure joy in that little move that couldn't be denied. It thrilled me every damn time, people. 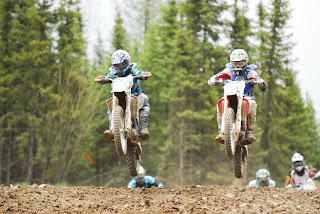 There is no doubt this is a competitive sport, and some of the races had tight little groups of riders that were pretty intense in this regard. They would come around the corners in a close little knot, each rider trying to gain that edge. I was amazed at how few crashes happened considering that intensity (the only ones I saw were at the very start of one of the intermediate races, and no one was really injured). By the end of the second race I was on my feet trying to see every inch of the track. By the second set of races (each group races twice) I could sense some of the rivalries and while I didn't know any names I began to quietly root for certain riders. 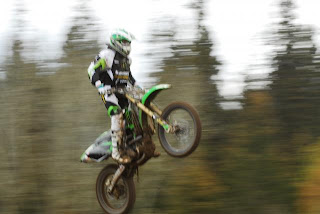 I actually loved watching every group, including the youngest racers who were so intent on honing their skills. And there are skills required in this sport, people. I watched the riders closely, observing how they position their body to maximize speed around corners and over the jumps. These boys have, as they say now, "mad skills", and I was truly impressed. 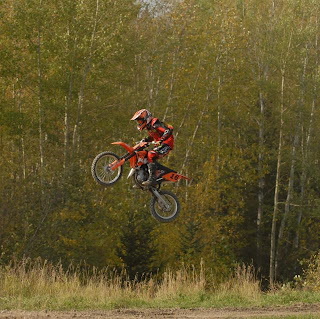 What I suppose I loved most about motocross is that it's another instance of a community within our larger Fort Mac community. People come to this city and often don't have any family, or any friends. They need to find a niche, a place where they belong - and groups like MDRA become that place. It becomes the kind of group where you can engage in a sport you enjoy but you can also become part of a passionate group of people who share a common interest and vision. MDRA is committed to providing the best possible experience for the participants, even bringing in well-known pro racers like Kevin Johnson and Kelly Smith to do clinics for the riders. 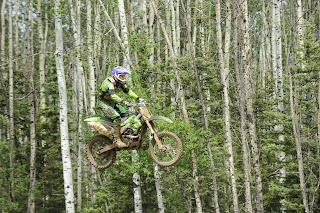 When I contacted Scott Richardson, the president of the MDRA, one of the first questions he asked is how tall I am. I thought that was a rather odd question to ask someone he'd never met, and when I inquired why he said because he needed to know what size bike to put me on. I was a bit aghast - me, on a dirt bike? I barely do mountain bikes, people. So, I told him "no bike - I'm too old to break limbs". Well, here it is - after Saturday I've changed my mind. I'll be back at the MDRA track this summer - and next time, maybe, just maybe, I'll try out one of those dirt bikes if the offer is still open. It was just that much damn fun, people. 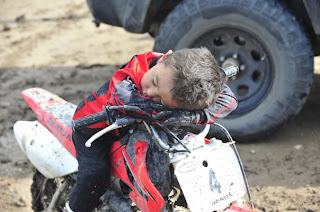