The Tar Sand Betties Rock - And Roll, Too. 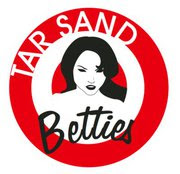 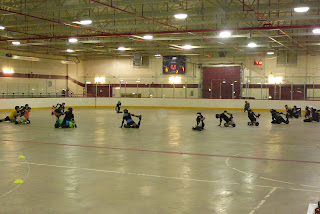 When I walked into the old rink at Mac Island for the Sunday night practice of the Tar Sand Betties what I noticed first was a whole lot of women in roller skates and black clothing. And a lot of hot pink. And some neon green. And a fair number of fishnet tights, too. There was even the occasional tutu, and I began to suspect that this is a sport of a different sort, with style, colour, and humour, too. 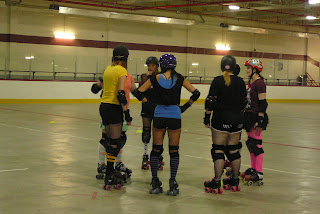 I sat down with my camera and notepad and settled in to learn something - because people I know nothing about roller derby. I learned pretty quickly, though, that this is a sport that is ferocious, competitive, tough - and yet full of laughter, banter, and jokes. 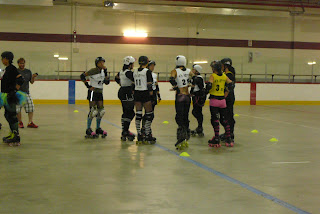 They do their "bouts" in "jams" that last a maximum of two minutes. Each team has a "jammer" that earns points, and the more times you lap the opposite team the more points earned. The other skaters are blockers - and they do exactly what that implies. The blocker's job is to prevent the jammer from getting through the pack and earning those points. The jammer is the one they all want to prevent from getting ahead - but when one skater of any sort goes down then much like dominoes others tend to go as well, creating some spectacular crashes. 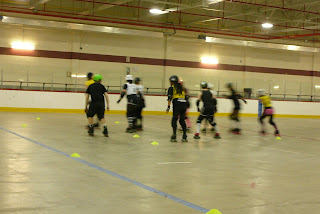 The jams started slowly, and the women took some time to warm up - but when they got going the action got a whole lot fiercer. Speed, aggression, and attitude are all required for roller derby, but so is a sense of camaraderie. While they may be engaging in these bouts they are also a team and they function as one, too. During the last jam of the night an obviously relatively new skater was acting as the jammer. Just before the whistle blew ending the final jam she was knocked down, and clearly had the wind knocked out of her. Over skated the other girls, sitting on the floor with her as she recovered, helping her to feet, and even helping her get her skates off. I saw them then as not just tough competitors but as a team who looks out for each other, too. I was impressed with how they can take that competitive spirit onto the track but once the bout was over they can put it away and be there for each other. 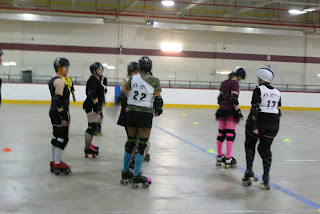 The Betties also happen to be a good-looking group of women of all ages, shapes, and sizes. Each and every one was sexy in her own way, but most of all because each and every one exuded a sort of confidence and healthy competitiveness that was so refreshing to see. In this city often dominated by the XY chromosome seeing some women who have created this little community with other women was amazing. I loved seeing them razz each other and joke even after bashing each other up a bit on the track. There were no hard feelings, no feelings of anger - just some good ol' competitive aggression being unleashed in a very wholesome and athletic way. I can't even begin to tell you how much I smiled watching these women with each other. It was just so incredibly awesome to witness women treating each other in a way that was respectful and kind, and yet at the same time encouraging each other to be tougher and stronger, too. 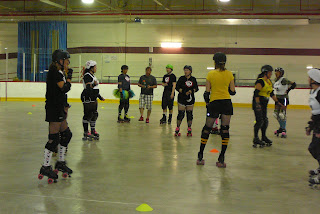 I could go into a whole lot about how I think all women could use a little roller derby spirit in their lives - like how we could all learn about healthy competition that doesn't devolve into dramas, and how we can encourage each other to be tougher while still being compassionate - but maybe we just need to see how much fun the Betties have in order to see that. I can't think of a better thing to do, people, than to go out and see one of the Betties' practices. You can see a little Fort Mac community growing right inside our larger community, and you can see a group of women that are tough and strong and sexy and fierce and compassionate and, in my opinion, role models. I'll be going to see the Betties again, people, but next time I'm taking my kid - because there is something to be learned from the Betties, and it ain't just the rules of roller derby. 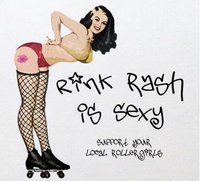