Thoughts On Why I'm McCranky This Week

There are days, people, when I get pretty cranky about things happening in the city. The last couple of days have been like that. I sometimes feel a bit like my city, the place I happen to call home, is under siege, and I need to both give myself a pep talk and calm myself down a bit. It's been that kind of week.

It started a few days ago when someone on Twitter mentioned seeing someone in downtown Fort Mac wearing a T-shirt. T-shirts aren't a fashion crime in my books, but this particular T-shirt said "Fort Make Money". Now, that's one of those nicknames for the city that tick me off a bit as the implication is that everyone is just here to make some cash and run. Then someone else saw another T-shirt. This one read "Hell Sands - Hell Does Freeze Over - Fort Mac, AB". This started me wondering about who exactly is making these t-shirts, and the people who are choosing to wear them. As someone else asked did oilsands paycheques pay for those T-shirts? I assume people are familiar with the concept of biting the hand that feeds them? But I sighed, and moved on, especially when the other good folk in Fort Mac started discussing a positive T-shirt campaign as a counter. I don't wear graphic T-shirts - it's not my fashion aesthetic - but I'd wear one of those because it's a lot easier and more sane than confronting every person wearing a negative T-shirt. So, as I say, I moved on.

Then I checked my blog stats and noticed some of the google searches that were leading people to this blog. There was the search using the words "Fort McMurray hell on earth". Say what? Someone was actually searching for that? And then the next one really stopped me. The search was "do people in Fort McMurray have shorter life spans". Shorter than what, I wondered? Your average Canadian? Your average person in an impoverished nation? Chipmunks? What kind of search was that, exactly?!? (and I can assure you both those searches would find nothing to support those ideas in this blog) Once again, though, I moved on, hoping that the people doing those searches might have found something in my blog that showed them that Fort Mac is not hell on earth or the quick way to an early grave.

Finally, though, someone from another city tweeted that Fort Mac has a lot of "issues". Issues with drugs (which I freely acknowledge, although I don't think that's exactly unique to us), and issues with gangs (again, we do, but so do many other cities and even smaller towns - some places in Quebec and Ontario have very active gang issues even in small communities). Then they commented on our problem with "civic corruption". Frankly I'd had enough by now and was in cranky overload. I commented that I'd like to see some evidence of this so-called corruption. The evidence? They have family here that "have told them it happens" and "accept it as fact". I've had family tell me about alien encounters, too, but anecdotes aren't evidence, people. I again commented that a serious allegation needs to be accompanied with evidence, but none was forthcoming, of course. When I refused to back down I was informed (in a Tweet that was deleted but that made it to my email notifications) that I was passionate about my city but "bitter". Since when is asking for evidence of a serious allegation a sign of bitterness? I'll admit to a certain degree of irritability at this juncture of the exchange, but not bitterness. I'm afraid that if someone is going to level a serious charge that affects the image of the city I call home then I'm going to ask them to provide some proof. And if they can't do so I'm not going to accept their anecdotes as proof. Rumour and hearsay are exactly that, not proof, and if asking for evidence is a sign of bitterness then I think our scientific community must be comprised of some deeply bitter individuals.

So, I've had a three-day run of cranky, people. I'm not cranky about living here but sometimes I get truly tired of all the mud-slinging. I get genuinely weary of the constant unsubstantiated allegations, the people who treat my home as a target, and the incessant barrage of misinformation from drive-by journalists. What saves me, though, are those other passionate residents of Fort Mac I have had the pleasure to talk to or meet. They know that while we do have problems this is our home, and they know we are trying to address the issues. I know that for them, and for my family, it's worth continuing to show the world MY Fort Mac - the city as I know it and I experience it, the good, the bad, and the being-worked-on. It's why I started this blog. It's why I keep writing it. It's why I take the time and make the effort I do. It's because this is my city - my home! - and I have a responsibility to both contribute to it and to showcase it in as honest a way as I can. This is MY Fort Mac, people. Even on days when I'm a bit McCranky about it all. 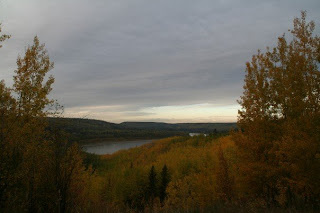